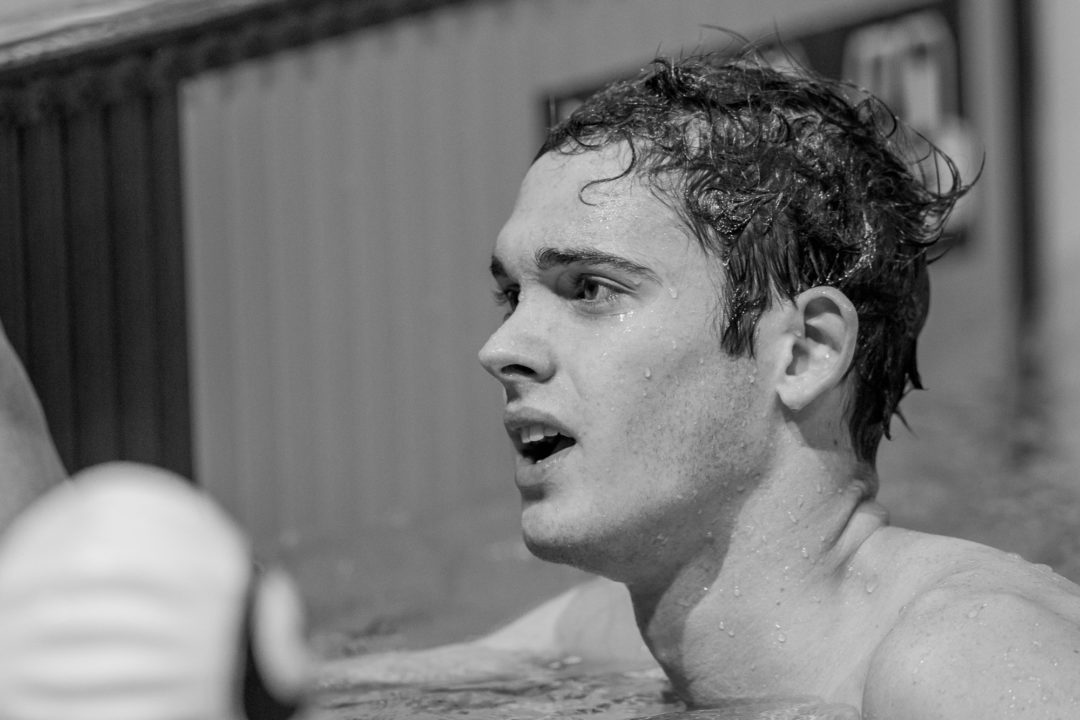 After missing meets for the first half of the season due to a collar bone injury, Gunnar Bentz returned to competition on Saturday for the Georgia Bulldogs. Archive photo via Tim Binning/TheSwimPictures.com

After missing meets for the first half of the season due to a collar bone injury, Gunnar Bentz returned to competition on Saturday for the Georgia Bulldogs. SEC rival LSU traveled to Athens to face off with Georgia, with the Bulldogs topping the Tigers on both the men’s and women’s sides. Bentz picked up a victory in the 100 fly, using his front half speed to clip teammate Mick Litherland 48.10 to 48.25. Bentz also placed 2nd in the 200 free, touching in 1:39.22 behind Georgia’s Walker Higgins (1:38.18).

Megan Kingsley picked up a pair of wins for the UGA women. Kingsley first won the 200 fly, setting the pace early on as she dominated with a 1:57.88 to teammate Chelsea Britt‘s 1:59.45. Kingsley returned for the 200 IM, once again leading from start to finish as she hit the wall for a 3-second win in 2:02.29.

ATHENS, Ga. – The LSU swimming and diving team came up short against Georgia today, with the men losing by the score of 170-122 and the women falling 186-108.

“Georgia certainly isn’t the team that you want to ease back into competition against, but as I told the team, this is the SEC and this is what we signed up for,” explained LSU swimming coach Dave Geyer. “We may have been a little more fatigued than I thought we would be, but we looked great last night when we got into town.”

The highlights of the day for the Tigers came in the diving well, where Juan Celaya-Hernandez and Lizzie Cuicombined to win all four springboard events.

Celaya-Hernandez got back to his winning ways, winning the one-meter springboard with a score of 393.00 and the three-meter after posting a 413.55.

Cui was also able to take home gold twice after scoring a 321.15 on one-meter and a 360.45 on three-meter. Cui’s score on three-meter was her best score of the season.

While Cui and Celaya-Hernandez won the events, other divers made personal and season-best marks.

Makayla Robillard was able to set a personal-best on three-meter after topping 300 for the first time in her career. Robillard dove to second place with a score of 300.08.

Rileigh Knox and Matthew Phillip were also able to set season-high scores today. Knox set a season-high on the one-meter with a score of 270.75 and a third-place finish. Phillip set his season-high on three-meter, scoring a 342.15 while also finishing third.

“I’m very happy across the board with our performances,” said LSU diving coach Doug Shaffer. “At this point, we want to be setting personal and season-best performances. These are good projections looking forward!”

In the pool, the women were led by junior Summer Spradley, who won the 100 breaststroke with a time of 1:03.07. Spradley also finished sixth in the 100 freestyle and was the second leg of the 200 medley relay team that took silver. Spradley was joined by Grace Horton, Helen Grossman, and Haylee Knight to race to a time of 1:43.64.

The men were led by senior Joao Mescolote, who was able to win the 50 freestyle with a time of 20.70, beating Goergia’s Alex Bemiller by .2 seconds.

Mescolote also finished fifth in the 100 freestyle after posting a time of 46.26. Mescolote swam in both relays, anchoring the 200 medley relay team that finished second after recording a time of 1:29.49, and leading off the 400 free relay team to a time of 3:05.36.

Meanwhile, freshman Braden Nyboer set a personal record in the 1000 freestyle as he finished fifth with a time of 9:47.55.

“This is about switching back into meet mode for us,” said Geyer. “There were definitely some pieces that I liked within the results and we just need to put them together over the next few weeks.”

Next up for the Tigers is a dual meet against Texas A&M at 10 a.m. on Saturday, January 20th at the LSU Natatorium.

What will he swim at conference and NCAAs? One of the few guys who is extremely versatile but carries a heavy relay load to

He missed half the season of training….you really think his 4im will be there? If so then everyone else is overtraining

Missed half the season competing. He’s been in the water training for a while now. Full training? probably not most of it, but still. He’ll be fine.

I think they might make that call after SECs

Jack and Harv know what to do. They work amazingly as a TEAM. Gunnar Bentz can swim 100s, 200s and dive platform if necessary. James Bond is pissed he did not adopt the name GUNNAR BENTZ!