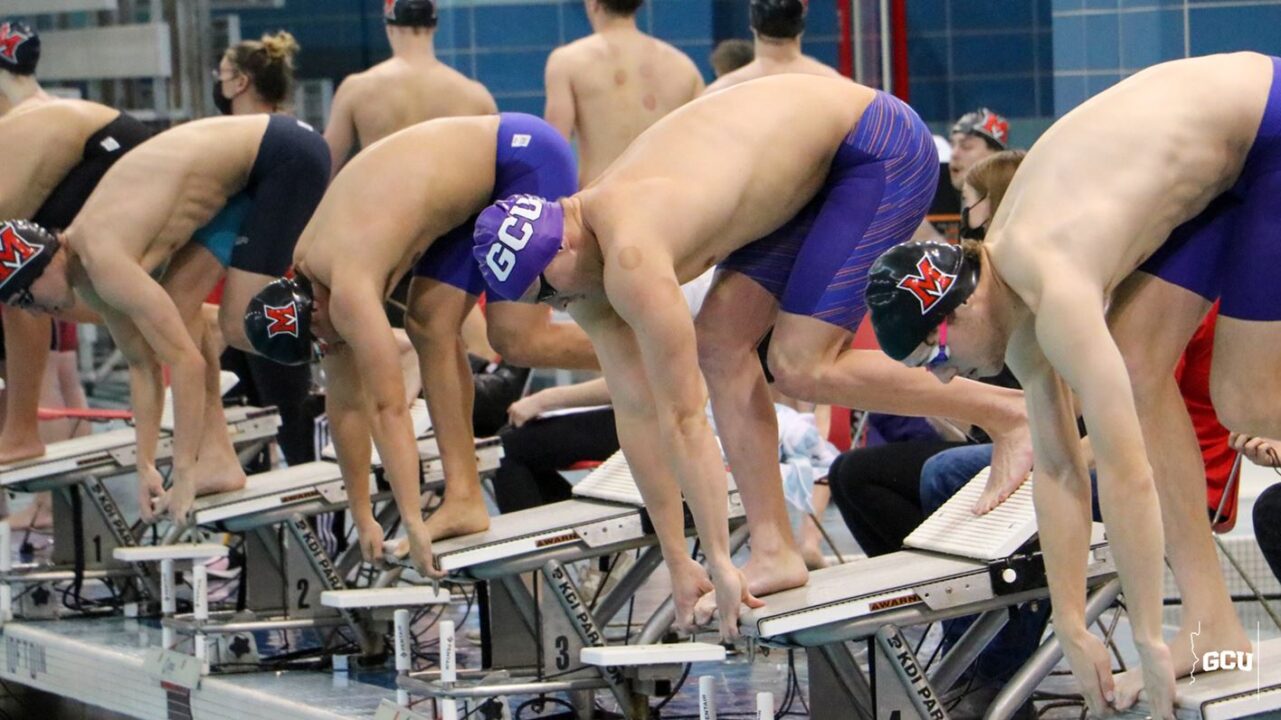 The Grand Canyon men's swimming and diving team won the three-day Miami Invitational while the Redhawk women came out on top as well. Current photo via GCU Athletics

BYU swept its tri-meet on both the men’s and women’s sides, winning 21 events, including a first-place sweep of the diving events.

During Boston College’s meet against Tufts on Friday, one school record and five pool records fell, and BC defeated both the Tufts men’s and women’s teams.

The Miami (OH) women and Grand Canyon men emerged victorious on the final day of the Miami Invite in Oxford, Ohio, with the Redhawk women picking up three event wins on Saturday and the Lopes men going a perfect six-for-six in the pool.

To start the meet, sophomore Jack Armstrong and Brunlehner earned an NCAA B cut in his 100-yard freestyle preliminary heat. Armstrong earned the cut in a time of 42.77 and set another pool record.  In the finals, GCU swept the final 100 freestyle with Armstrong (43.09) followed by seniors Florent Janin (44.18) and Samuel McKenzie (44.35).

Brunlehner opened the final day with her NCAA B cut in the 100 freestyle with a time of 49.58, in addition to breaking the 49.67 GCU school record that was set by Diana Jaruseviciute in 2018. In the finals, Brunlehner swam a faster time of 49.29, shedding .29 seconds off the preliminary record.

Senior Emily Muteti placed second in the 100 freestyle with a time of 49.81.

Float like a butterfly, sting like a bee. Senior Adrian Curbelo Tejera won the 200 butterfly with a time of 1:45.61. The race was down to an arm’s length, but Curbelo Tejera reached the wall .12 seconds before his opponent to earn an NCAA B cut.

Lyubavskiy won the 1,650 freestyle with a time of 15:20.74 for an NCAA B cut. His time also set a new GCU school record, beating Carazo Barbero’s time of 15:21.51 that was set at the WAC Championships this year.

“Our divers did very well this weekend,” Shafer said. “Abbie swept all three events and put up a good score on platform. Shiori had a great second-place finish on platform. I am looking forward to the next month of training and completion.”

GCU swept the 400 freestyle relays to complete the final day here in Oxford. The women’s team set a new school record with Muteti, Claire Banic, Kaitlyn Carr and Brunlehner, who posted a time of 3:23.06 for the win. The men swam a time of 2:54.75 in their victory.

Up next, the Lopes will take a rest before hosting their first home meet Saturday at 11 a.m. (Phoenix time) against Northern Arizona, Arizona Christian and Ottawa (Ariz.).