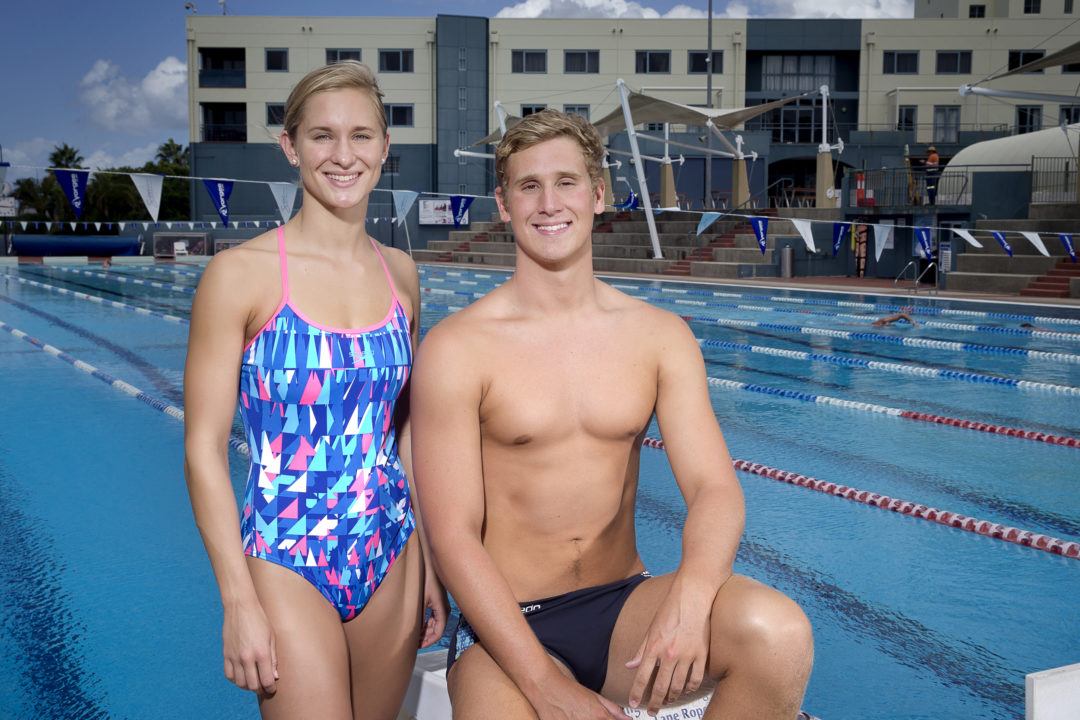 Alexander Graham and Maddie Groves each earned prestigious awards from Bond University in Australia for their swimming efforts over the past year. Current photo via Bond University/ProMedia

Bond University Blues and Sports Awards celebrated Australian swimming stars Alexander Graham and Maddie Groves at its annual award ceremony yesterday, November 1st. Each was respectively named Sportsman and Sportswoman of the Year in recognition of their achievements over the past year.

For Groves, this award represents the 3rd time the 23-year-old has been named Bond’s Sportswoman of the Year. After winning 200m fly silver in Rio at the 2016 Olympic Games, she came through a near-suspension for having missed doping tests to wind up nailing both a silver and bronze at the 2018 Commonwealth Games on the Gold Coast.

As for Graham, the also 23- year-old led off Australia’s gold medal-winning 4 x 200m freestyle relay at the Commonwealth Games, setting a new personal best in the process.

Graham recently graduated from Bond with a sports management degree. His says of his award, “The award is a great way to end my studies at Bond. I certainly wouldn’t be where I am today – in or out of the pool – without the guidance and experience I’ve had over the last four years.

“Next year will be my biggest year yet and my main focus now is on training hard with Bond University Swimming Club to achieve my lifelong goal of getting on the Olympic team.”

For her part, Groves stated, “I am absolutely thrilled to accept this award for the third time.

“There are so many fantastic athletes studying at Bond and we receive so much support to achieve our best both in our field and in the classroom.”

Bond University Executive Director of Sport, Garry Nucifora, commented, “We are blown away to have so many world-class athletes among our student body and the Blues Awards is a great way to honour their outstanding efforts and ongoing commitment to the rigors of training for competition while studying.

“I’m very proud of all of the sportsmen, sportswomen and teams who have put in significant effort in their sport and their studies throughout the last year.

“I look forward to celebrating their achievements well into the future.”

Also nominated in the Sportsman/woman of the Year category were Elijah Winnington and Laura Taylor.