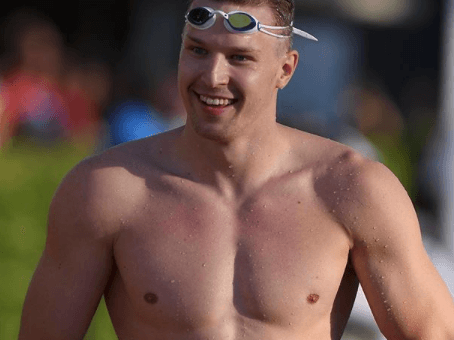 It wasn’t a new World Record for Ukrainian Andrii Govorov tonight in Glasgow, but the 26-year-old earned a new European Championships Record with his 50m fly victory.

Just last month the World Championships bronze medalist scorched a new WR mark in the shortest fly event, notching 22.27 to overtake an old supersuit era record. Here in Glasgow, Govorov opened his campaign with a solid 22.90 to represent the only prelims swimmer to dip under the 23-second threshold. He then brought that down to 22.85 in the semi’s, only to unleash a powerful 22.48 in the final to stand atop the podium.

Gorvorov’s 22.48 outing overtakes his old championship record of 22.73 from the 2016 edition of these championships and enters as the 4th fastest performance of all time in the event.

Govorov inspired racers around him to perform exceedingly well themselves, as runner-up Ben Proud of Great Britiain was just hundredths off his national record, earning silver in 22.78, while Russian Oleg Kostin took bronze in a new Russian NR of 22.97.

Govorov’s tempo in the 50 fly is just insane. So cool to watch him swim

Cool to see Michael Andrew would have been 3rd here. He’s truly an amazingly versatile swimmer.

For max. 3 rd? Good possible results.
No way better in breast, back, free and fly.
Forget it.

Watch the race here if you want 🙂 :https://m.youtube.com/watch?v=EJpJASOI6h4