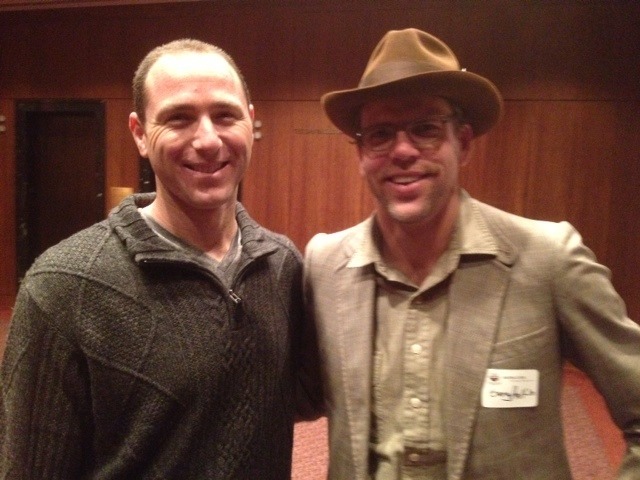 Time to mark your calendars: the USA Swimming Foundation revealed today the date and location of the 2013 Golden Goggles Awards. They will be held on Sunday, November 24th in Los Angeles, California, shifting back west after one year in New York City.

This event serves as both a major fundraiser, as well as a celebration of the year that was in American swimming. The best and brightest of the day are honored, and awards are given out such as “Swimmer of the Year” and “Comeback Swimmer of the Year,” as voted upon by a committee with a portion of the electorate going to the fans.

This even has grown bigger-and-bigger in stature every year, culminating last year with guest appearances from New York City megalyths like Donald Trump and Mayor Michael Bloomberg, and was MC’ed by the great Bob Costas. They were joined by the usual cast of swimming icons like Rowdy Gaines, Gary Hall Jr., and our very own Mel Stewart.

For more pictures like the one above from last year’s Golden Goggles, see also:

Past Winners of Swimmer of the Year:

Bobo was not at all happy about The Donald last year.

LA ought be able to bring out those more to BoBo’s liking.

Bobo was not at all happy about The Donald last year.

LA ought be able to bring out those more to BoBo’s liking.

I like the usual dull swim towns, Mission Viejo one of the safest cities over 76,000. Anyways, there building the last community called Rancho Mission Viejo which well to a draw for the future swimmers.

Former Mission Viejo Nadadores coach Daniel Ad’m Dusenbury has been banned for life by swimming’s national governing body after acknowledging having an inappropriate relationship with a female teenage Nadadores swimmer, the Orange County Register has learned.

Another prominent Orange County swim coach, Bill Jewell, has resigned his coaching position at Golden West Swim Club in the wake of a Register story detailing allegations of his inappropriate conduct toward female teenage swimmers, the Register also has learned.
This is the scandal though.