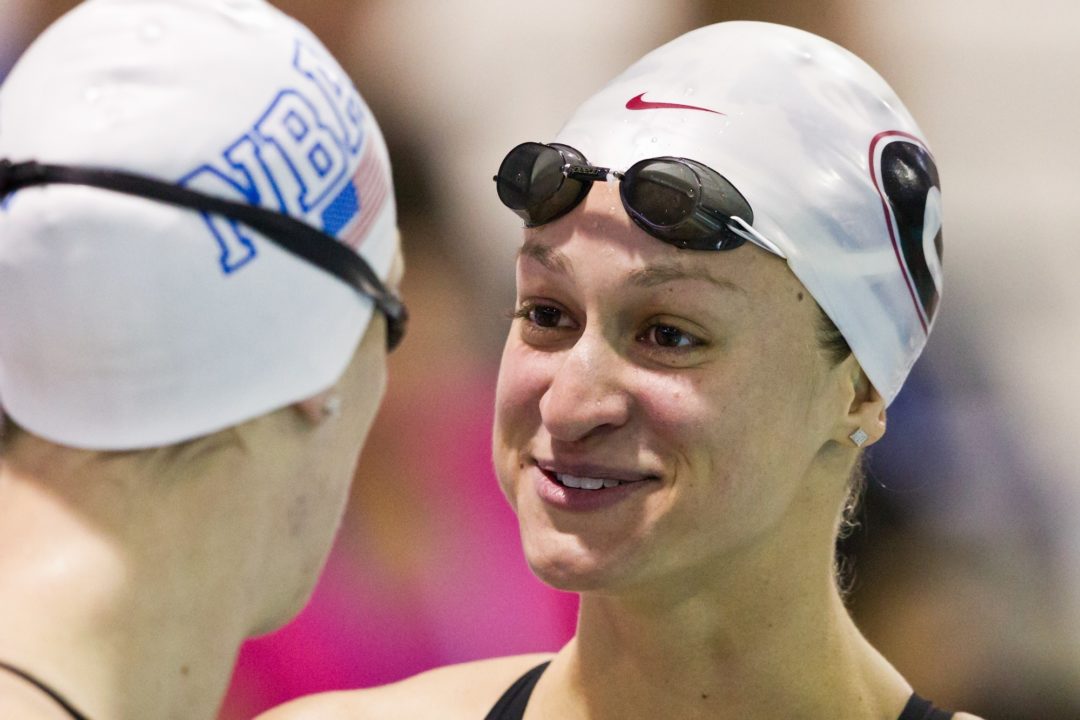 Georgia's Megan Romano and her teammate Allison Schmitt should win the 200 free relay - unless Jack Bauerle pitches a changeup.

The top two teams in last year’s women’s 200 free relay, Stanford and Cal, were slammed by graduations. The champions from Stanford lost Sam Woodward and Betsey Webb, their bookends. The runners-up at Cal graduated their three fastest legs, including NCAA 50 free champion Liv Jensen. Even third-place Arizona, though they only graduated one leg, is down a second from last year’s relay because of transfers. They’ve filled those legs with – of course – two incoming transfers.

That’s all in the past, but the point is: last year’s outcome is not a big key to this year’s outcome. The landscape in this race has shifted dramatically in just a season’s time.

Arizona and Georgia will have the two single, biggest legs in the race. For the Bulldogs, who lead the country this season, that’s Megan Romano: she of the sub-21 relay split from SEC’s. She’s not the only swimmer in this field who has split such a crazy time; Margo Geer was a 20.98 on an anchor at NCAA’s last season.

Thus far this season, Arizona has continued to use Geer on a leadoff for this relay, though, with Georgia choosing to put Romano on the back-end. From there, then, we look at have to look at what’s happening in between.

Assuming Georgia doesn’t change their relays (their 200 medley will be in trouble if they don’t use Romano, Schmitt, or van Landeghem on it, which they chose not to do at SEC’s), but with their best four, nobody is as good as they are top-to-bottom. Schmitt probably doesn’t have the pure-speed to go under 21 seconds on a relay start, as good as she is in the longer races, but certainly a 21-mid at worst. Chantal van Landeghem was co-SEC champion in the race. Maddie Locus will be the key leg to the whole relay, and the Bulldogs will have to avoid slipping into the B-Final like they did last season.

My gut feeling is that somewhere the Georgia relays will change, but until we know what that change is, they’re the favorites.

Arizona has four solid legs, between Geer, Kaitlyn Flederbach, Alana Pazevic, and Megan Lafferty. There’s some other great relays around the country, notably the Tennessee women who were neck-and-neck with Georgia the whole way at SEC’s. Faith Johnson and Caroline Simmons are a spectacular 1-2 punch who live for the 50 free. Their anchor Lindsay Gendron is showing to be the superstar that the Vols have always known she could be. Kelsey Floyd is this team’s pivot point; she has every potential to sit near the 21.0 mark on a relay start, and she usually shows up at NCAA’s. If Georgia changes any legs on their relay, Tennessee could win this thing. They’re talented enough, even with a freshman Faith Johnson, to pull the victory off either way.

There’s some other very interesting teams in this race. Florida was only 12th in this relay last season, but have four entirely different swimmers – and are already more than a second faster than that 12th-place relay. Ellese Zalewski, the Aussie, is really exciting, and their three freshman legs Lindsey McKnight, Sinead Russell, and Natalie Hinds were all high school superstars that have translated well to college.

Minnesota was 17th, and missed scoring, in this relay at NCAA’s last year, but that group of two freshmen and two sophomores are now two sophomores and two juniors, and are swimming out-of-their-minds this season. USC now has a healthy Kasey Carlson, two freshmen who are on-fire Jasmine Tosky and Kendyl Stewart, and a third in Kasia Wilk who has become a big-time anchor for them already. Cal has two freshmen on their relay, but with Rachel Bootsma and Cindy Tran both being so good under water they have the chance to pull out spectacular 50’s.

Their rivals from Stanford are the defending champs. They may not be as good 1-4 as they were last season, but sophomore Maddy Schaefer has Geer/Karlson/Romano-like potential.

Keep reaching down to a school like Texas, seeded 12th. They lost their leadoff leg Karlee Bispo to graduation, but with Gretchen Jaques having a career-year, they might not even feel that in this relay. A&M got their best sprinter Lili Ibanez back, and most importantly put all of their best sprinters into NCAA’s. Last year, they were without two of the four girls who should’ve been on this group, and still finished 11th. We can’t forget about SMU – they are seeded 9th, were clearly short of their full taper at NCAA’s, only graduated one, and are clearly a much better relay this year than last for it.

Those are the “complete teams,” with a whole lot more than have a pair of really good legs and will hope for others to step up around them. Virginia with Lauren Perdue can’t be counted out from the top 8, especially with junior Rachel Naurath showing some good speed. The two teams that beat them at ACC’s each have great pairs: for Florida State it’s Tiffany Oliver and Kaitlyn Dressel, and for North Carolina State it’s Miffy Henley and Riki Bonnema.

There’s so many changes and moving parts to process in this race. It’s not simply a matter of moving this team up a spot, that team down a spot. If you asked 50 different people to pick a top 8, you would probably get 50 different answers. There’s about 16 different relays that it’s painful to leave out of this final. Fact: there will be some incredible 200 free relays in the B-Final.

Here goes with our best guess:

Darkhorse: We mentioned a whole lot of relays above, but the real darkhorse of the crowd is Penn State. Their leadoff Paige Whitmire is one of the more underrated sprinters around, they’ve got a Fittin sister (Carolyn) this year, and Alyson Ackman caught fire toward the end of Big Tens. If you want to go really deep, check out Purdue’s sprint relay. They’ve got four really good sprinters in Carly Mercer, Lauren Gustafson, Lauren Nichols, and Rhi Sheets.

i would say no schmitt on this relay…they have several other options and schmitt has 500 next event.
i also say Stanford is much higher than what you have them forecasted at…..they could be fighting it out with Arizona for second.

georgia will take this hands down

As crazy it might sound Georgia should leave Romano out of the 800 free relay. Georgia could win without her. They need her in the 200 medley relay to make the A final. Both medley’s relays are key for Georgia to win the team trophy.

At SEC’s, Georgia’s anchor on the 2 medley split 21.9. If they put van Landeghem on the end of it, who was 21.9 flat start, that’ll help them quite a bit if they don’t want to take Romano of the 8 free.

Taking Romano off the 8 free, where she was 1:42, means putting in Gaid or MacLean, who were 1:45.8 and 1:46.1 flat start at SEC’s, which is a 3 or 4 second swing, but still good enough to win last year’s race. Also, Mcdermott was 1:44 on this relay at NCAA’s last year, which would be a better replacement if she’s healthy.

Georgia ahead of Tennessee or Arizona. It’s very tough to predict.

I have Georgia obviously sweeping the 400 and 800 free relays but this free relay will be their toughest free relay finish, now due to just the nature of the race but as Braden mentions, do they sacrifice their medley’s – the back and fly legs are crucial for Georgia to have their best swimmers on it..in order to make a run at this event?…plus I think Tennessee and one of the other Pac 12 schools come out on top.