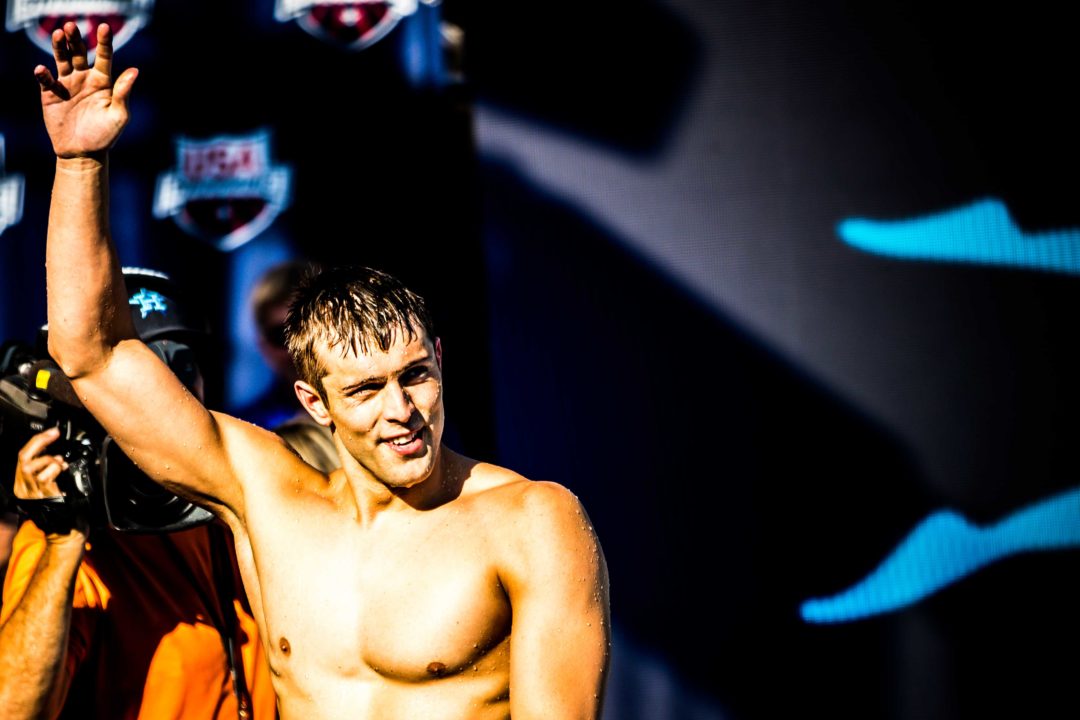 Ryan Held swam lifetime bests in the 50 and 200 free on Saturday. He's scheduled to swim two more races, including the 100 fly, on Sunday. Archive photo via Jack Spitser/Spitser Photography

While most of the top U.S.-based swimmers are racing in congregations in either North Carolina or California this weekend, two of the best males are racing at the Birmingham Swim League Iron City Invite in Birmingham, Alabama.

That includes Olympic gold medalist Ryan Held, who won both the 50 free and the 200 free on Saturday.

In the 50 free, specifically, he swam 21.62. That’s a lifetime best for him by .25 seconds, clearing the time he swam at Summer Nationals in 2019. That was Held’s peak meet that year, after missing the World Championships team. At that meet, he was also a lifetime best of 47.39 in the 100 free, and he’s due to swim the 100 free on Sunday in Birmingham.

That swim for Held in the 50 free ties him as the 2nd-fastest American in the Olympic Trials qualifying period, which opened on November 28, 2018: it matches the 21.62 that Michael Andrew swam at Worlds in 2019.

Among that group, only the teenager Curtiss and Held have done those swims since 2019.

Held swam that 50 free as his 2nd race of the day after also marking a lifetime best of 1:49.12 in the 200 free. That undercuts his previous best time by .37 seconds. Though this isn’t a race he’s likely to swim at the Olympic Trials, this all adds up to a mountain of anticipation for his Sunday swim in the 100 free.

While the meet was mostly local age group and high school swimmers, Held wasn’t racing alone in that 50 free. The runner-up in the event was Ali Khalafalla in 21.94. That shaved .03 seconds off his previous best time and Egyptian Record done at the 2018 Mediterranean Games.

Held was part of the post-grad training group at the University of Alabama under former head coach Coley Stickels. Since Stickels left that position mid-season in December under controversy, two of the most prominent members of the group, Margo Geer and Ian Finnerty, have retired. He and Khalafalla are currently training with Stickels still in Tuscaloosa, though not at University of Alabama facilities.

Another swim faster than the ones at Pro Swim! Really big shot here. That second 50 free spot is always an interesting one to see who claims it. Held definitely staking his claim.

Hell, he could beat Dressel at trials if Dressel doesn’t fully taper

I agree, men’s 100 free is too deep for Dressel to take it easy.

A ‘mountain of anticipation’?

Heldilox is starting to look scary! I’m really excited to see how Trials goes. Held’s a great guy too, awesome to see him do well

The men’s 100 free at Trials will be must see TV. If Dressel is not on his A game, someone could snatch it up.

I think Dressel can beat everyone but held on a 75% taper. Rooney/Pieroni/Zapple are all gonna be on the relay imo but they’re a cut behind Dressel and Held

I can see Held and Zapple beating dressel if he’s not fully rested and they are. I don’t think anyone else though

US relay is just awesome, if US were allowed a B team at Olympics, I’d say they would easily get bronze.

If only three relays swam the final 😉

You mean the US A team would easily get bronze😁 Anyway, the Russians seem unbeatable and Aussies look stronger at the moment as well…

GMM predicted a 47.3 for Dressel (he’s capable of faster, it all depends on how much he tapers). But Held could definitely beat that – would be right around 47.3 now and better with a full taper. Maybe no longer a race for 2nd behind Dressel. If Zapple is on he could be close to that – he was 47.69 in 2019-20 I think.