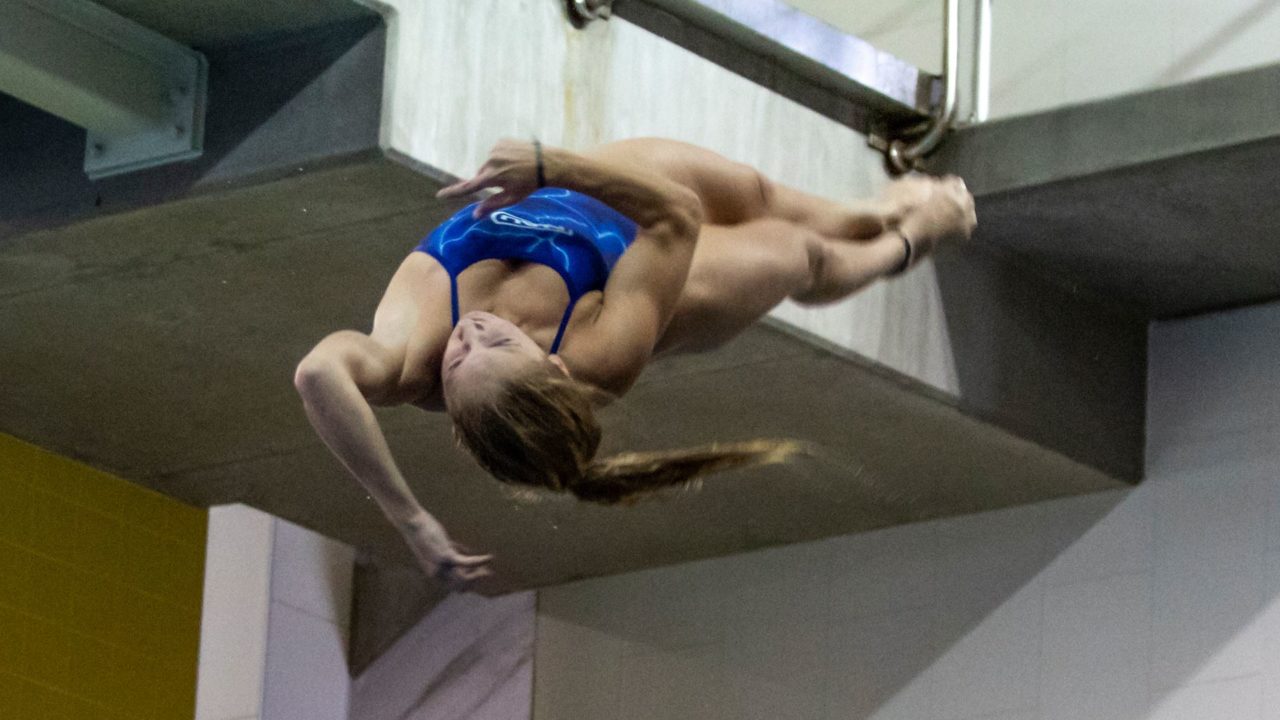 The Gold team posted eight first-place victories in 12 events on Friday to edge out the Blue team, 54-50, in the Northern Arizona's Blue vs. Gold meet. Current photo via Northern Arizona Athletics

FLAGSTAFF, Ariz. – The Gold team posted eight first-place victories in 12 events on Friday to edge out the Blue team, 54-50, in the Northern Arizona swimming & diving team’s annual Blue vs. Gold intrasquad meet. The meet was the Lumberjacks’ final competitive preparation before their dual schedule opens up in two weeks in Colorado.

“I’m excited because we had a lot of good results today,” said head coach Andy Johns. “I liked the way they raced and the way they supported each other. They brought a lot of good energy to the meet. We’re in a good place right now, but we have a lot of work to do. It helps us set our sights on two weeks from now.”

Junior Miranda Nichols and freshman Hayley Mayhew each posted an event win and a second-place finish between the lanes, while junior Jenny Cheetham swept the 1-meter and 3-meter springboard events for the Gold team.

However, it was freshman Sara Jendbro‘s win the 150 breaststroke over junior Hope Williams of the Blue team that sealed the victory for the Gold Team. Jendbro just edged out Williams by less than two-tenths of a second with a winning time of 1:45.43 in the final individual event of the meet.

“Sara Jendbro winning the breaststroke over Hope was big for the Gold team,” Johns said. “Hayley coming in as a freshman has showed that she’s a racer and a competitor. Miranda and Elisa (Rodriguez) are really competitive with each other. We have a lot of nice training partners and swimmers who like to race each other and we’re excited to see that.”

The Blue team opened the meet with a win in the 200 medley relay, racing out to a 7-0 lead behind junior Lauren Hazel, Williams, junior Maddie Seidl and junior Elisa Rodriguez‘s winning time of 1:47.56. Even after the Gold team won the next two events, including Nichols’ victory in the 50 freestyle, the Blue team maintained a 14-11 advantage.

Mayhew posted her event win in the 200 individual medley with a time of 2:09.31 and was supported by junior Niamh McDonagh in second-place. Mayhew and McDonagh’s one-two finish pushed the Gold team ahead, 19-15. Cheetham followed with her first of two wins on 3-meter, posting a score of 300.52.

Montiel’s win was the first of four straight for the Gold team – a span which Cheetham won the 1-meter event with a score of 316.72. Cheetham was one of three Lumberjack divers to make their season debuts in Friday’s Blue vs. Gold meet with redshirt sophomore Emily Sharrer and freshman Emily Luberto competing for the Blue team.

“We haven’t been going full-throttle yet, so I thought they all did great,” said associate head coach Nikki Huffman. “Some of them have only done those dives three or four times total. A couple of little things could’ve been better, but if they were all good right now, we would be worried about later.”

Jendbro’s narrow win over Williams in the 150 breaststroke sealed the deal for the Gold team as it gave them a 54-43 lead. Although the Blue team won the day’s final event – the 200 freestyle relay – they were only able to capture seven points to provide the final score of 54-50.

The Lumberjacks’ first home dual meet will be Nov. 1 versus New Mexico at 4 p.m. at the Aquatic and Tennis Complex.