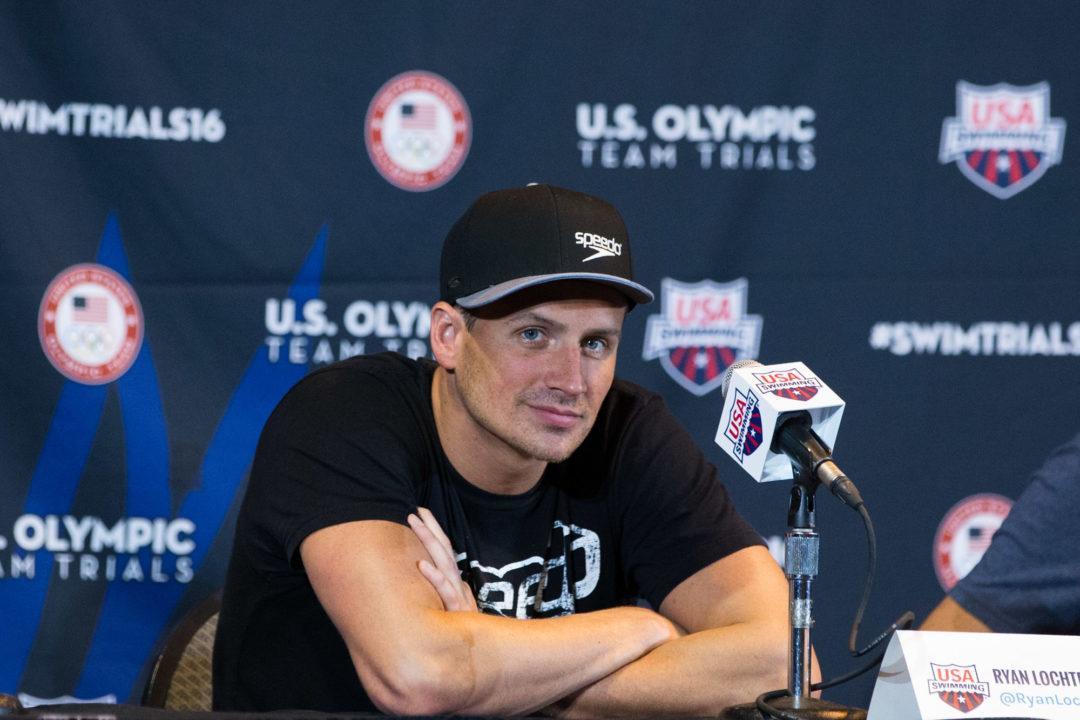 Brazilian news site Globo.com is reporting that Ryan Lochte and three other American swimmers weren't robbed at gunpoint as they originally alleged, but rather were involved in an altercation at a gas station after the swimmers damaged a bathroom door and other items. Archive photo via Tim Binning/TheSwimPictures.com

Brazilian news site Globo.com is reporting that Ryan Lochte and three other American swimmers weren’t robbed at gunpoint as they originally alleged, but rather were involved in an altercation at a gas station after the swimmers damaged a bathroom door and other items.

Globo.com says that Lochte, Jimmy Feigen, Gunnar Bentz and Jack Conger were in a cab Sunday night on the way home from a party and stopped at a gas station to use the bathroom. The Globo report says damage was done to the bathroom door, soap dispenser, paper towel dispenser and a bathroom sign, and that the swimmers wanted to leave without paying for the damages.

The police were called, the report says, but while waiting for them to arrive, the swimmers were “aggressive” and forced security guards to point a gun at them to keep them from leaving the scene.

Globo.com says an agreement was struck at some point for the athletes to pay for the damages.

There’s some confusion as to Bentz and Conger’s involvement. Originally, a judge ordered that Lochte’s and Feigen’s passports be confiscated until the full story became clear, but Bentz and Conger were not included in that order. But the two were pulled off of the airplane prior to their flight home from Rio last night.

Globo.com’s report says that police say Bentz and Conger are only witnesses to the altercation, though a judge’s order says differently. The four now have a Brazilian lawyer, Sergio Riera, who says they were “frightened” and didn’t originally understand why they were pulled from the flight.

Lochte has already left Rio and is back in the United States. But it appears the other three will remain in Brazil until the situation is resolved.

Meanwhile ABCNews reports that CCTV footage showed one of the swimmers “breaking down the door to the bathroom at the gas station and fighting with a security guard,” citing a Brazilian police source.

UPDATE: Now ESPN is reporting that the swimmers wanted to use the bathroom but found the door locked. The alleged breaking of the door happened when “a few of the swimmers… pushed on the door and broke it.” ESPN also reports that a security guard confronted the swimmers but did not take out his gun or point it at the swimmers. ESPN’s info comes from an anonymous official with the Brazilian police department.

Again, NOTHING in the video evidence corroborates this.

If the police were involved in the whole bathroom incident then why didn’t they come forward at the beginning of this whole ordeal and say that’s what happened?

“Jack Conger confirmed Lochte lied about being held at gunpoint.”
What if Conger is throwing Lochte under the bus to get back at him for taking his relay spot. lol.

And…40+ peopled voted down my anti-alcohol tirade on the “Ryan Lochte to Try Dry Season” article…and now look. College binge drinking leads to “real world” binge drinking and that leads to what we see here today. Life would be better for myriad of people if binge drinking were not part of the equation….yet we continue to celebrate the party lifestyle. And this much I know is true, for another 40+ will vote down this comment as well…we love binge drinking and everything that goes with it. Don’t cry for Argentina (or Brazil), dont cry for Ryan Lochte or the three others dumb enough to party with him – celebrate it, because we love it. If we REALLY cared about this… Read more »

Watch from 7:15 to 7:28. Guy at the screen’s top left appears to pull something from his side and whichever musketeer he’s talking to immediately puts his hands up and backs away…

This is a national embarrassment. To play on a country’s cliche for your own benefit when they’re in the biggest spotlight is disgusting. Lochte could have just said no there was miscommunication with my mom I had a gun pointed at me while I was out. Months of reports about how terrible Rio is and we come over there commit crime and blame it on this struggling city. Disgusting man, evaluate how much everyone participated and ban them from the national team.

This.
If Lochte were a mature person he would have issued apology immediately and clarified that there was miscommunication with his mum as soon as his mum broadcast his little lie.

This bathroom story sounds like a lie made up by a woman. A woman might believe that when you have to go you just have to get to a bathroom. A man knows there are other alternatives.