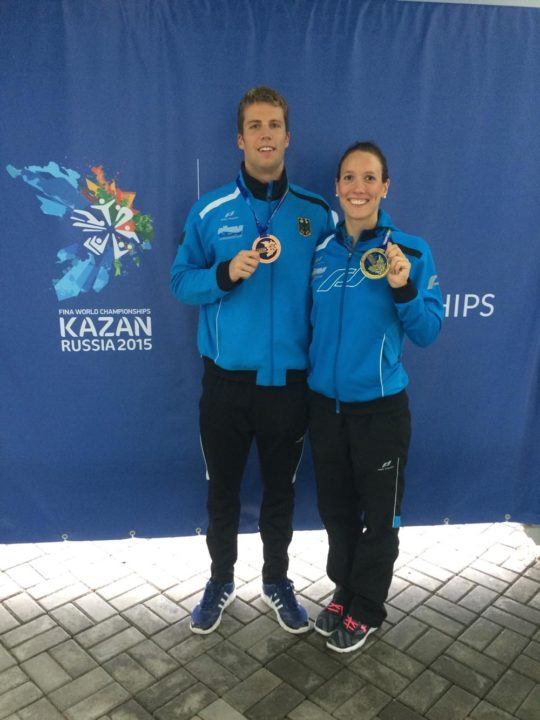 At last weekend’s German National Team Championships, Isabel Härle and Hendrik Feldwehr jumped a last time into the pool to... Current photo via courtesy of Härle/Feldwehr

At last weekend’s German National Team Championships, Isabel Härle and Hendrik Feldwehr jumped a last time into the pool to compete for her German swim club “SG Essen”. Afterwards they both posted a short message on their Facebook accounts:

“After years of competitive sports, we now want to say goodbye officially. We were lucky enough to participate in many international and national competitions, to meet great people, make friends and celebrate successes.  We would like to thank everyone who made this possible and supported us every day. ?
#dankeanalle Swim-Total Markus SudauGerman Sporthilfe SG Essen #family #physio #freunde Sporthilfe NRW e.V. #teamendruschat #henninglambertz AMSPORT #mannschaft #nela ”

Besides her successes in the open water, Isabel also was a talented pool swimmer, she won several German National Championships, for example in 2011 the 400m , 800m and 1500m freestyle.

Her life partner Hendrik Feldwehr was for about ten years one of Germany’s fastest breaststroke swimmers on the 50m and 100m and an important support for the German relays. The 31-year old holds the German National Records in the 50 m and 100 m breaststroke (LC). In 2009, he took the 4th place in the 50m breaststroke at the World Championships in Rome, his time of 26,95 was  a new European record at that time.

Isabel Härle and Hendrik Feldwehr trained in Essen (Germany)  for several years with the current German National Head Coach Henning Lambertz, since 2013 their coach was Nicole Endruschat. Among their teammates were Dorothea Brandt, Caroline Ruhnau, Damian Wierling, Poul Zellmann, Lisa Höpink, Christian vom Lehn, the squad in Essen at  the Federal Training Center always has been the training base for many of Germany’s top swimmers.