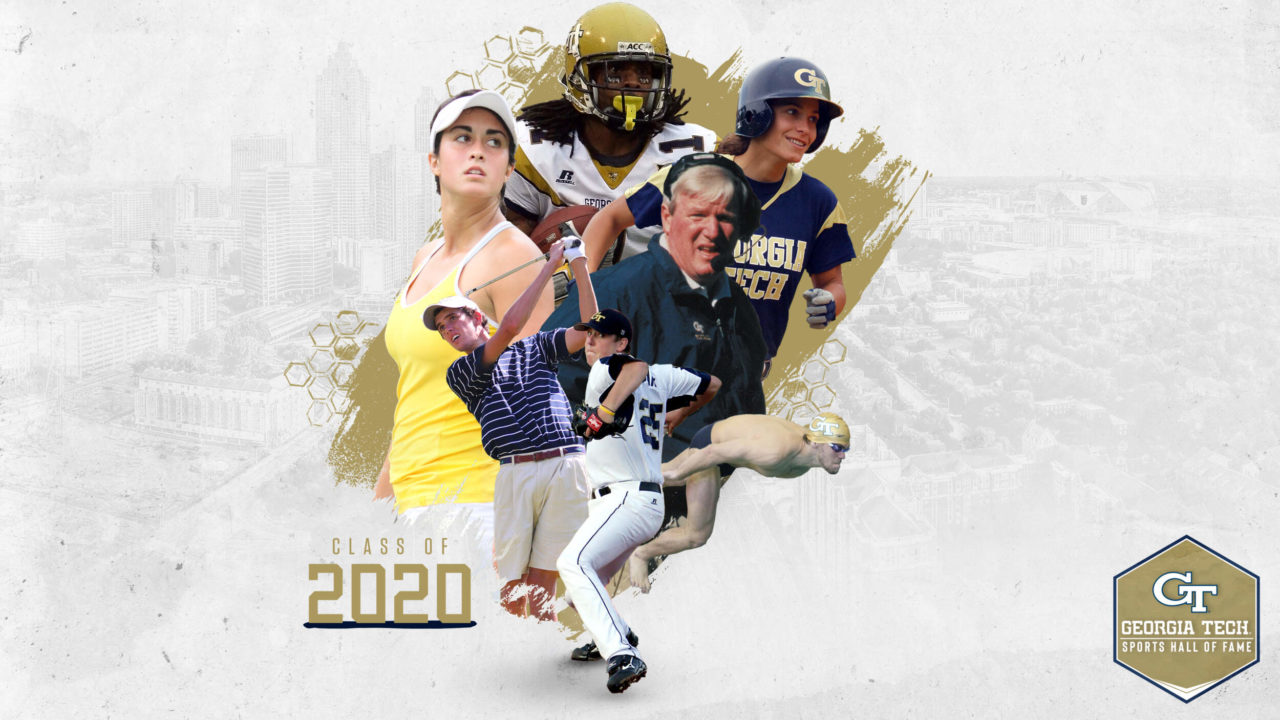 Among those named to the class is Gal Nevo, a three-time Israeli Olympian who is the most decorated Georgia Tech swimmer in school history. Current photo via Georgia Tech Athletics

“It means a lot to me personally to be able to welcome these seven individuals to the Georgia Tech Sports Hall of Fame,” said director of athletics Todd Stansbury. “Not only is this one of our most decorated Hall of Fame classes ever due to their incredible athletic achievements, but it is comprised of first-class people that represent Georgia Tech in a way that makes all of us proud. It’s a privilege to induct them into the GT Sports Hall of Fame.”

Tech’s newest Hall of Fame members lifted their teams and departments to great heights during their time as Yellow Jackets.

Burnett helped lead Georgia Tech’s football team to a pair of ACC Coastal Division titles and a berth in the 2009 ACC Championship game, while the Yellow Jackets won or shared three ACC golf titles during Hadley’s career. McDowell helped lead Tech to its first NCAA team title in any sport when the women’s tennis team won the national championship in 2007. McGuire helped lead Tech to three NCAA regional appearances and 126 wins in baseball, while Morales helped the Jackets to four NCAA Tournaments, an ACC title and 186 victories. O’Leary guided Tech’s gridiron team to five straight bowl games and a share of the 1998 ACC title.

Due to uncertainty of fall activities stemming from Covid-19, Georgia Tech will not hold an induction ceremony this fall. The Class of 2020 will be officially inducted next fall along with the Class of 2021, which will be elected early next year.

Following are brief bios on the 2020 Hall of Fame class:

One of the most decorated defensive backs in Georgia Tech history, Burnett was named first-team all-America in 2008 by Pro Football Weekly, second-team by Rivals, Sports Illustrated and Sporting News and third-team by Phil Steele. He was twice named to the All-Atlantic Coast Conference second team in 2008 and 2009. Despite playing only three seasons at Georgia Tech, Burnett is tied for second in school history with 14 career interceptions. His seven interceptions in 2008 are tied for the fourth-most in single-season school history and tied for the most in the nation that season. The College Park, Ga., product led the Yellow Jackets in tackles in 2008 with 93, and he led Tech in interceptions each of his three seasons (three in 2007, seven in 2008, four in 2009. The Jacket teams he played on won 27 games in three seasons, and he helped lead Tech to back-to-back ACC Coastal Division championships and ACC Championship Game appearances. Selected in the third round of the 2010 NFL Draft by the Green Bay Packers, Burnett has 770 tackles, 10 interceptions and 10 fumble recoveries and 9.5 sacks in 10 NFL seasons – eight with the Packers (2010-17), one with the Pittsburgh Steelers (2018) and one with the Cleveland Browns (2019). He won Super Bowl XLV as a member of the Packers. Burnett and his family remain residents of College Park and provide community service through the Burnett Family Foundation.

A first-team All-American by Golfweek, and a second-team choice by the Golf Coaches Association of America in 2008, Chesson Hadley earned All-America honors in three of his four years on the Flats, was named to the All-Atlantic Coast Conference team in 2008 and 2010. Hadley became a first-team All-American in 2008 after winning the Carpet Capital Collegiate, posting five top-10 finishes and five other top-20 showings, after earning honorable mention All-America honors as a freshman in 2007. Hadley won the ACC individual championship as a senior in 2010 and went on to earn honorable mention All-America honors again. Over his Tech career, the Raleigh, N.C., native posted 11 top-10 finishes in 36 events. He won the ACC title in 2010 after finishing T-9, T-20 and T-3 his first three years, and helped the Jackets win three team titles. In four NCAA regionals, Hadley finished seventh, T-12, T-30 and T-8. He tied for fourth at the NCAA Championship as a freshman and 14th as a senior, helping the Jackets advance to match play, and he helped Tech finish eighth, 10th and third in stroke play at the NCAA Championship during his career. Internationally, Hadley was selected to play for Team USA in the 2008 Palmer Cup. He turned pro following his senior year and has been a member of the PGA Tour since 2014.

McDowell is the third member of Georgia Tech’s 2007 NCAA Championship team to be elected to the Georgia Tech Sports Hall of Fame. A two-time All-ACC in 2008 and 2009, McDowell captured 2008 NCAA singles championship as a sophomore to become the first Tech women’s tennis player to win an individual national title. She was named ITA National Player of the Year and earned ITA All-America recognition in singles that year after winning a school-record 45 singled matches. The Atlanta native and Marist School alumnus was a freshman when the Jackets won the 2007 NCAA title, and she also helped Tech win the Atlantic Coast Conference crown that year and teamed with former Yellow Jacket Irina Falconi to win 2008 ITA All-American doubles title. She also participated in the 2009 NCAA singles championship. In addition to winning a program-record 45 singles wins in 2007-08, she owns fifth-best mark of 39 wins in 2006-07 and Is second in the record book in single-season dual match singles wins with 25 in 2006-07. McDowell also owns the fourth- and eighth-best single-season singles winning percentages in program history. In her career, McDowell stands third all-time in career singles wins with 116 and ranks third in career singles winning percentage (75.3). Also a star in the classroom, McDowell was named an ITA Scholar-Athlete in 2007, received the Honda Award for Tennis in 2008, and was tabbed to the CoSIDA/ESPN the Magazine Academic All-District second team in 2009. She was named Academic All-ACC three times, was a recipient of 2010 ACC Weaver-James-Corrigan Postgraduate Scholarship, and was awarded 2009 Georgia Tech Bobby Dodd Scholarship. McDowell played professionally following her collegiate career and participated in U.S. Open as qualifier. After retiring from tennis in 2012, she attended law school at the University of Georgia, earned her law degree in 2015 and is currently an attorney in Seattle, Wash.

One of the top pitchers in the Atlantic Coast Conference in the late 2000s, Deck McGuire was named the conference’s top pitcher in 2009, and became a first-team All-American by Collegiate Baseball magazine and a second-team choice by Baseball America. A two-time first-team All-ACC selection (2009, 2010), also was named a third-team All-American in 2010. The Richmond, Va., native was named the ACC Pitcher of the Year in 2009 after going 11-2 in 16 starts for a 3.50 ERA, striking out 118 batters and walking just 41. Overall, McGuire finished his career with a 28-7 record in 49 appearances and 45 starts. He pitched to a career ERA of 3.28 over 291.0 innings, eclipsing the 300-strikeout mark at 306 total. Among his other honors were being named a first-team Freshman All-American in 2008, and he was a semifinalist for the Golden Spikes Award in 2009 and a finalist for National Pitcher of the Year in 2009. One of just 10 first-round MLB Draft picks in Georgia Tech history, McGuire was selected 11th overall in 2010 by the Toronto Blue Jays. He pitched in 48 games over two major league seasons (2017, 2018) with Cincinnati, Toronto and the Los Angeles Angels and also played in the Korean Baseball Organization in 2019.

A three-time All-Atlantic Coast Conference performer, Aileen Morales left Georgia Tech owning numerous school records and winning a lot of games. Morales arrived at Georgia Tech in January 2005 after graduating a semester early from Hardaway H.S. in Columbus, Ga. Despite beginning her collegiate career during what was scheduled to be her final high-school season, she wound up being named ACC co-Freshman of the Year and earning second-team all-conference recognition. She went on to be a three-time all-ACC honoree as a middle infielder, earning first-team accolades as a junior and senior in 2007 and 2008, and was also a three-time all-region selection. She earned third-team all-America honors. Morales remains Georgia Tech’s all-time leader in games played (265), starts (265), at-bats (850) and stolen bases (154) and ranks among the program’s top 10 in runs (second – 216), hits (third – 261), doubles (t-fifth – 43) and triples (t-fifth – 10). She also holds three of the top five single-season stolen base totals in school history, including a school-record 46 as a senior in 2008. Over the course of Morales’ four-year playing career, Georgia Tech won 185 games, claimed the 2005 ACC regular-season and tournament championships and advanced to the NCAA postseason four times. Following the end of her collegiate playing career, she was selected by the Chicago Bandits in the second round of the 2008 National Pro Fastpitch Draft. She played two seasons with the Bandits and helped lead the squad to the NPF championship as a rookie in 2008. She also competed internationally for Puerto Rico from 2007-10 and served as an assistant coach for the 2012 squad that finished eighth at the International Softball Federation World Championship, PR’s best finish in more than a decade. Morales was hired as the head softball coach at Georgia Tech in 2017.

George O’Leary revived the fortunes of the Tech football program in his seven full seasons, beginning as interim head coach in 1994 through the 2001 campaign. His team won co-champion honors in the Atlantic Coast Conference in 1998, and he led Tech teams to a streak of five consecutive bowl games, the best run at Tech since 1951-56 under Bobby Dodd when Tech played in six straight bowl games. From 1998 through 2001 his teams posted a 34-14 record (.708). He was named ACC Coach of the Year in both 1998 and 2000 – and saw his Tech teams finish in the top 25 three straight years from ’98 through 2000 (ninth, 21st and 17th in the Associated Press poll). O’Leary’s 2000 team led the nation in total offense with a Tech record of 509.0 total yards per game. His exceptionally-balanced 1998 team defeated four nationally-ranked opponents while leading the ACC in scoring at more than 35 points a game, in net punting and punt and kickoff returns, and setting an NCAA defensive record with seven fumbles returned for touchdowns. As defensive coordinator at Georgia Tech from 1987-91 under head coach Bobby Ross, O’Leary directed the defense that led Tech to the United Press International national championship in 1990. That defense ranked in the top 15 nationally in every major statistical category after opening the season by not allowing a touchdown for 19 consecutive quarters. Among the biggest victories over ranked opponents in his career at Tech have been wins over four rated teams in ’98 (including sixth-ranked Virginia) and fourth-rated Clemson in 2000. Among the standout players he coached at Tech were quarterback Joe Hamilton (the 1999 Heisman Trophy runnerup) and All-Americans three straight seasons at Tech in center Craig Page in ’98, Hamilton in ’99 and offensive tackle Chris Brown in 2000. O’Leary retired from coaching and administration at the University of Central Florida in 2015.