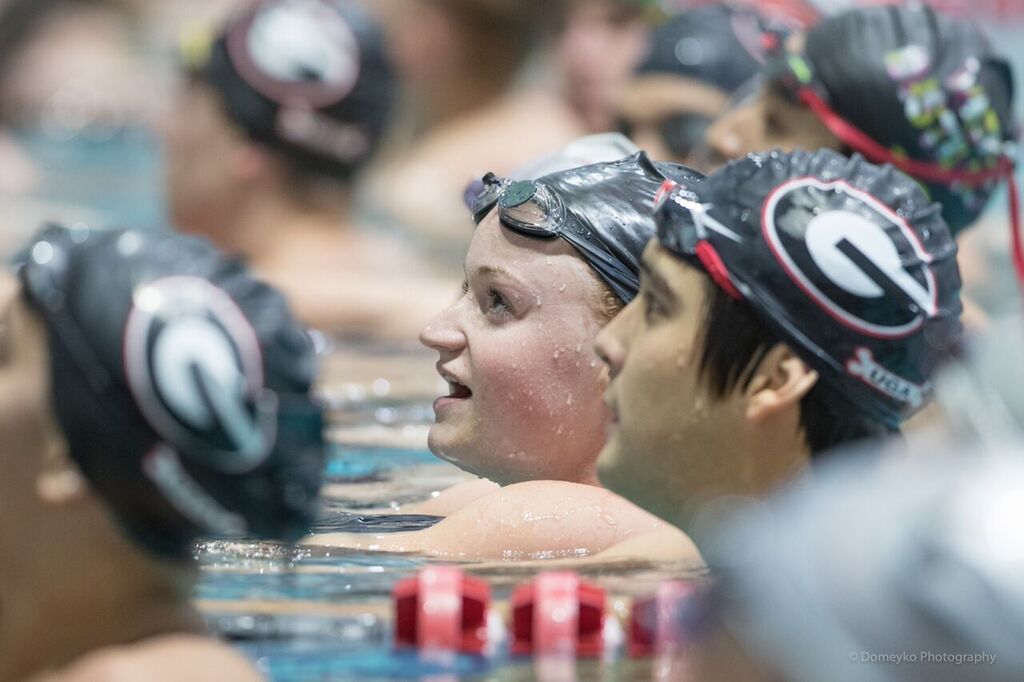 Though the Badgers took control of the sprint free events and Beata Nelson was impressive on the women’s side, the visiting Georgia Bulldogs took wins on both the men’s and women’s side last night in Madison. Notably, Cierra Runge was not racing today, marking her second-straight missed meet for the Badgers.

Megan Kingsley and Kylie Stewart provided some upperclassman leadership, with Kingsley taking both butterflies (54.28 and 1:57.87, respectively) and Stewart barreling to a 53.22 to win the 100 back over Wisconsin’s Jess Unicomb (53.93).

Wisconsin’s Nelson had the swim of the meet, though, throwing down a 1:54.28 200 back, her fastest dual meet time ever, and faster than she went at the Texas Invite last December. Nelson’s time broke the UW pool record by almost three full seconds. She also posted a 1:59.64 to take the 200 IM.

Freshmen Camden Murphy and Greg Reed shined, winning one individual each. Murphy was a solid 47.54 to pick up a B cut and break the pool record, while Reed was in control of the 1000 free with a 9:10.14.

UGA took the medley relay, keying on Javier Acevedo‘s 22.41 backstroke lead off, while Wisconsin stormed back for a dominant 400 free relay win, with no leg over 45.3 and Griffin Back anchoring in 44.82 to combine for a 3:00.61.

MADISON, Wis. – Wisconsin coach Whitney Hite had a lot to be excited about prior to Thursday’s home opener for his Badgers vs. Georgia.

Hite, who began his coaching career at Georgia 20 years ago, was excited to get the Bulldogs in the Badgers’ home pool.

“We’ve gone down there a couple of times, and I have a special relationship with their coaching staff,” Hite said. “It’s where I started my coaching career and it holds a special place in my life.”

Georgia, with its eighth-ranked men’s and fourth-ranked women’s team, has been a powerhouse in college swimming for decades. “It was nice to get them up here,” Hite said.

However, hosting Georgia for the first time was not the only thing Hite could take away from the dual meet inside the UW Natatorium. A number of Badgers had outstanding meets.

Sophomore Beata Nelson continued her outstanding start by setting a UW Natatorium record in the 200-yard backstroke — something she has been doing since her high school days at nearby Verona.

Emmy Sehmann had a day, netting wins in the 50-yard freestyle and 100 free, and taking part in two winning relay squads.

“I have never been super competitive in dual meets, but it’s been very fun to be able to step up for the team and get my hand on the wall first,” Sehmann said.

On the men’s side, Tyler Zelen earned his first win as a Badger in the 50-yard freestyle, sprinting to a time of 20.89.

“That was a lot of fun,” said Zelen, a transfer from North Dakota. “I feel accomplished, like I’m hitting my stride here.”

Freshman Matt Novinski followed up his coming-out party from last week’s opener with Auburn and Tennessee by turning in another stellar meet.

“I definitely wanted to make an impact as soon as I got here,” Novinski said. “That’s always been the goal.”

Novinski swam the 200 backstroke neck and neck with Georgia’s Jay Litherland, a 2016 Olympic qualifier. “To be able to compete with a guy like that, like I did today, was pretty cool,” he said.

Despite a number of individual successes, the Bulldogs emerged with a sweep of UW. The Georgia women won, 183-117, and the men’s team claimed victory by a margin of 168-127.

“Certainly, our goal was to win the meet, which was cut a little bit short, but it’s all about competing,” Hite said. “I think we did a really great job of competing today, and we’re looking forward to more competition against NC State.”

MADISON, Wis. — The Georgia swimming and diving teams swept Wisconsin on Thursday at the UW Natatorium.

“It was a job well done on both sides,” said Jack Bauerle, Georgia’s Tom Cousins Head Swimming and Diving Coach. “It was a real competitive meet with some great races. We picked up two wins against really good competition.”

Georgia will continue its road trip on Friday with a 5 p.m. meet at Northwestern.

nothing new. he did the same last week too in both the 100 free and back….more concerning in the free. he is a stud no doubt even before he went to uga. overall not an impressive showing but nothing to worry about

I would agree the times aren’t impressive but he must be experimenting to be splitting like that. Its not like he has a crap start and cant get going for the first 50.

Where is Meghan Rabb for Georgia??

if i remember that properly*