Georgia Men and Women Squeak Past Mizzou in Missouri 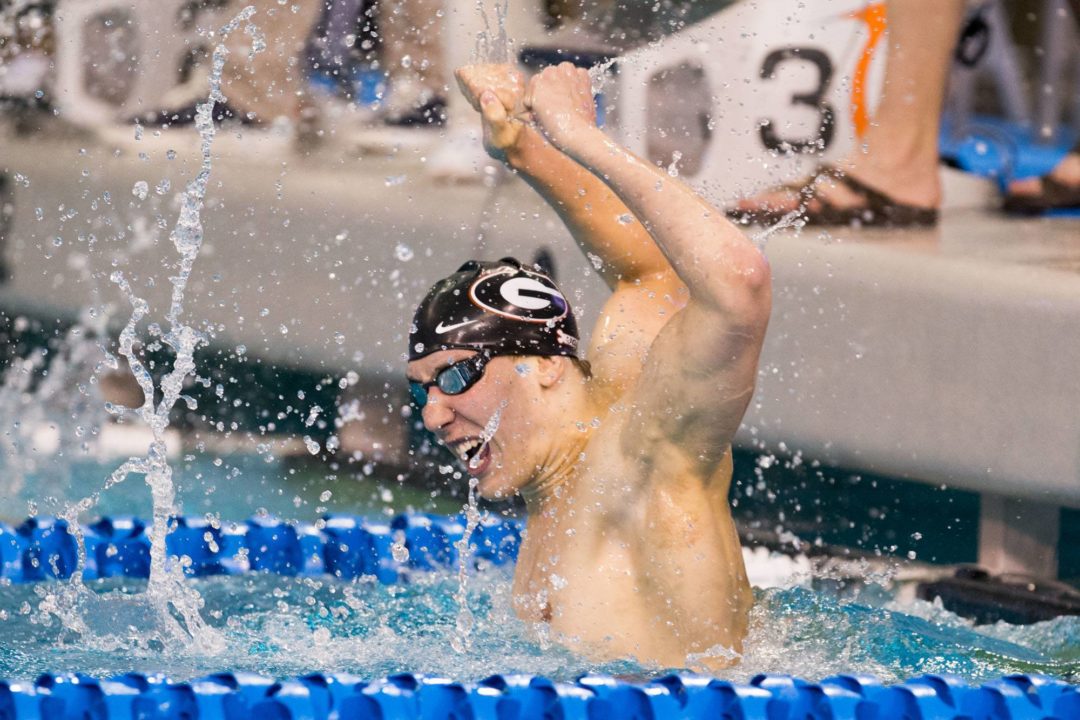 The UGA men's and women's teams continued their undefeated seasons in Missouri today, but had about all they could handle with the Mizzou Tigers. Current photo via Georgia Athletics

The No. 2-ranked Lady Bulldogs and No. 6-ranked Bulldogs pulled out victories against the No. 18-ranked Tiger women and No. 23-ranked Tiger men today in Missouri. The bigger story, however, is how well Mizzou competed. The UGA men won by only 5 points, and the UGA women won by 19.

Notably, the Lady Bulldogs were without their butterfly specialist, Megan Kingsley, and NCAA Champion Kylie Stewart. Even so, they had three double-winners in Stephanie Peters, Meaghan Raab and Chantal Van Landeghem.

The Bulldogs picked up a 152-147 decision, while the Lady Bulldogs earned a 159-140 win. Georgia’s squads improved to 5-0 overall and 2-0 in the Southeastern Conference.

“Those were huge wins for our teams,” Georgia head coach Jack Bauerle said. “Missouri is well coached and is really good, and we had to circle the wagon and come together to get it done. That’s the way it’s going to be this year; we’re going to have to fight for everything little thing we get. The kids did a heck of a job as both meets came right down to the end. We saw our teams stand up and fight their way through to come out with wins, and that’s priceless as far as getting ready for the end of the season.”

Georgia won the 400 freestyle relay as Olivia Smoliga, Burchill, Raab and Van Landeghem reached the wall in an NCAA-leading 3:20.07.

Georgia will return to action Dec. 2-4 in the UGA Fall Invitational.

COLUMBIA, Mo. – The Mizzou men’s and women’s swimming and diving teams dropped close Southeastern Conference dual against Georgia on Thursday afternoon at the Mizzou Aquatic Center. The No. 23 men fell to the No. 6 men, 152-147 and the No. 18 Tiger women lost to the No. 2 Bulldogs, 159-140.

Goodwin also swept both springboards with wins in the men’s competitions. He totaled a personal-best 398.40 to win 3-meter and move himself into fourth all-time at Mizzou in the event. Junior Hunter Fritter (Houston, Texas) was third on the board with 384.86 points, also a caree- best. Goodwin also won 1-meter after a round of 325.43 points, ahead of freshman William Gottsch (Elkhorn, Neb.), who went 302.70.

Chadwick swept the sprint freestyle races as he breezed to wins in the 50 and 100 free. He clocked a 19.89 to win the 50, ahead of Sansoucie in second with a 20.36 and sophomore Luke Mankus (Keller, Texas) in third with a 20.56). Chadwick then won the 100 free in a season best 43.20, almost two full seconds ahead of the second-place finisher.

In one of the more exciting races of the day, Sansoucie won the 100 fly in a time of 46.97, the third-fastest time in the nation this season.

In the men’s 200 breast, Schwingenschlogl proved victorious in 1:57.56, the fourth-fastest time in the nation so far this season. Senior Eddie Mapel (Hinsdale, Ill.) was second in 2:01.96 and sophomore Jordan O’Brien (Naperville, Ill.) took third in 2:03.38. Schwingenschlogl finished second in the 100 breast in 54.07, only 0.04 behind first. Junior Jordy Groters (Oranjestad, Aruba) placed third in 55.66.

In the men’s 400 free, the Tigers trailed most of the race until a quick final leg from Chadwick to give to relay team of Sansoucie, Schwingenschlogl, sophomore Mikel Schreuders (Oranjestad, Aruba) and Chadwick the win in 2:57.28.

The Tigers next return to the pool for the three-day Mizzou Invite, which runs Thursday, Nov. 17-Saturday, Nov. 19. Preliminary action will begin at 10 a.m. each day, with finals slated to start at 6 p.m.

Fast swim by Sansoucie in the fly

Missouri has 5 swimming coaches on staff including Christine Mabile… I’m sure she has a part in all of this as well.

Uhh, she does not.

I wanted to give a big shout out to diving coach Sweeney. As always, the divers kept the Tigers in the mix (30-8 on the women’s side and 28-10 on the men’s side). Thanks Jamie!

Where were Megan & Kylie for Georgia??