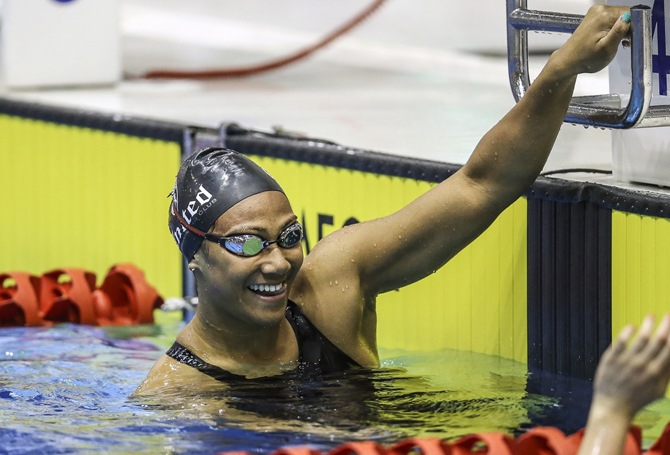 Fa'amausili finished 7th in the 50 free and swam on 3 Georgia relays at the 2018 SEC Championships. The injury will keep her out of the 2018 Commonwealth Games. Archive photo via Simon Watts/www.bwmedia.co.nz

2015 World Junior Champion Gabrielle Fa’amausili has withdrawn from New Zealand’s team for the 2018 Commonwealth Games. She will undergo surgery in March at the end of the NCAA (U.S. collegiate) season on her left knee to repair her meniscus and reconstruct her ACL, Swimming New Zealand says.

“This was a tough decision to make, I understand how much of an amazing opportunity and honour it is to be selected to represent NZ at such a pinnacle meet, however I don’t feel like I could represent our country to the best of my ability with the stress of injury on my mind,” Fa’amausili said. “I need to sit these games out in order to have a successful freshman year here at UGA and allow time for knee surgery and recovery so I can come back in top form to represent New Zealand at future competitions.”

The 18-year-old won the 50 backstroke World Junior title in 2015, breaking the World Jr record in the process (that record has since been broken). She was also a finalist in the 100 back at those championships. At the senior level, Fa’amausili competed at the 2017 World Championships in Budapest last summer, swimming to a 23rd place in the 50 back prelims.

While recovery from the ACL injury could take into next season, there is plenty of precedent for swimmers recovering to elite levels after knee surgery: former Texas A&M swimmer Sarah Henry won an NCAA title in the 400 IM (which included swimming breaststroke) after at least 2 ACL tears.

New Zealand’s roster for the Commonwealth Games drops to 17. Fa’aumisili was scheduled to swim as part of the women’s 400 free relay.

Wow. So sad, wishing her a speedy recovery!

Worth mentioning she also won the 50 back at 2013 Junior Worlds.

It said that. It sounds like a pre existing condition that she had coming to uga in January