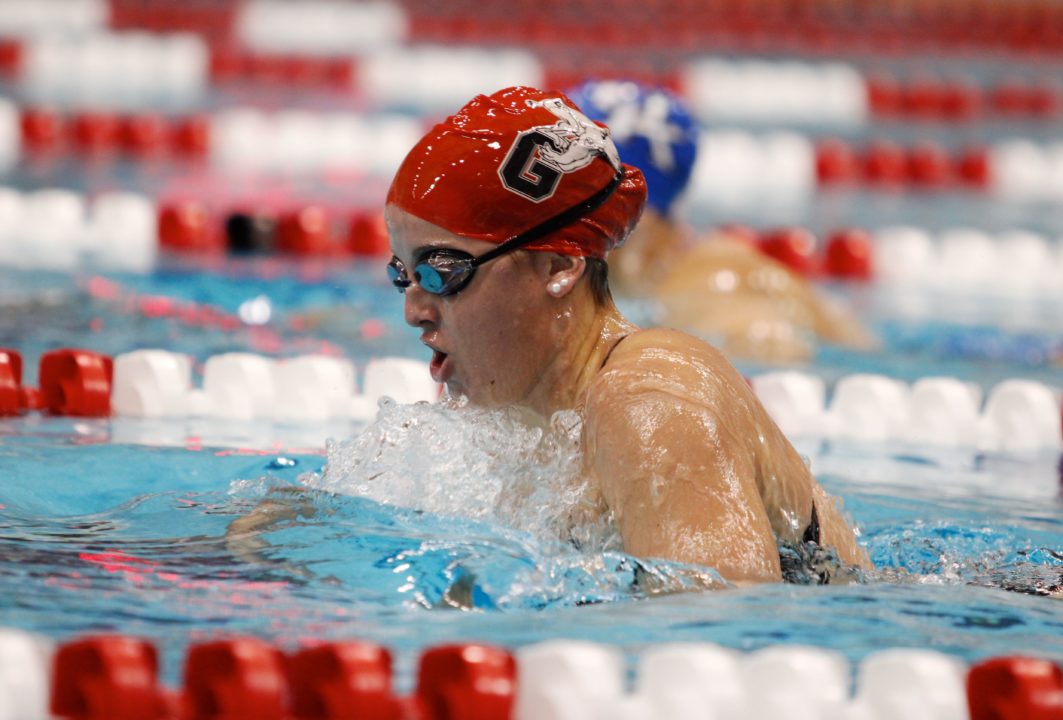 The UGA Bulldogs made the short trip to Atlanta, Georgia, to face their in-state rival Georgia Tech. UGA swept, but it was a competitive meet. Current photo via Shanda Crowe

After big home wins against Florida on Friday, the Georgia Bulldogs returned to action this afternoon against the Georgia Tech Yellow Jackets in Atlanta, Georgia. Tech opened the meet with a bang, winning both the men’s and women’s 200 medley relay, but UGA’s depth ultimately proved too much to overcome. The UGA women swam their last event of the meet, the 400 free relay, as exhibition. The UGA women won 189 to 109, and the men won 187.5 to 110.5.

Another great win for both the men and the women today in Atlanta. #wreckedtech pic.twitter.com/hUezYeNGKN

Individually, Iris Wang won the 200 free in 1:48.88, less than two seconds off her school record.

The UGA men faced a taller order in taking down the Georgia Tech men’s team, which is currently ranked 19th by the NCAA.

Like on the women’s side, UGA relied on two different male divers, Ian Forlini (three-meter) and Charlie Clifton (one-meter), to capture both diving titles.

UGA has another quick turnaround, hosting Wisconsin this Friday and Saturday, November 4th and 5th, in a two-day dual meet. Tech has some time off before hosting the Georgia Tech Invitational on November 17th-19th.

The teams face a quick mid-season turnaround, as they will face the Wisconsin Badgers in Athens on Friday and Saturday of this week.

“We had a really great meet today,” head coach Jack Bauerle said. “Georgia Tech had some really good swims and I am very proud of the team. We were a little sluggish at the start, but middle of the week meets are very different for us. We got better as we realized that we were there and it’s always nice to win against Tech in Atlanta.”

Ian Forlini claimed the top spot on the 3-meter springboard, posting a score of 367.88, while Charlie Clifton won the 1-meter with a score of 339.53.

Clark, Acevedo, Litherland and Dale clocked a 2:59.88 in the 400 freestyle relay to take first.

SEC Female Swimmer of the Week Meaghan Raab continued her success by winning the 100 breaststroke in 1:03.72. Olivia Smoliga, who owns the pool record in the event, won the 50 freestyle in 23.09 and Chantal Van Landeghem was the first to reach the wall in the 100 freestyle, finishing in 49.67.

Madison Duvall posted a 342.00 to win the 3-meter springboard and SEC Diver of the Week McKensi Austin took the top spot on the 1-meter with a score of 289.65.

Kylie Stewart, Shauna Lee, Cameron and McCann combined for the fastest time in the 400 freestyle relay, touching the wall in 3:24.52.

“We are looking forward to swimming against Wisconsin,” Bauerle said. “Coach [Whitney] Hite is one of my former assistants and has done a great job there. We will be hard-pressed to win the women’s meet, as they have quite a few talented swimmers. I think Wisconsin will be a heck of a challenge, especially coming off of today. They always come ready to compete.”

Georgia’s teams return home to Gabrielsen Natatorium this weekend to face Wisconsin. Friday’s competition begins at 4 p.m., while Saturday’s events will kick off at 10 a.m. The Lady Bulldogs will be looking to extend their home win streak to 102 consecutive dual or tri meet wins, dating back to the 1995 season. Admission is free.

THE FLATS – The Georgia Tech swimming and diving teams recorded 18 career bests at McAuley Aquatic Center on Wednesday afternoon in their losses to Georgia. The men fell by a margin of 187.5-110.5 while the women were topped 189-109.

“I am so proud of our team,” said head coach Courtney Shealy Hart. “We raced incredibly hard from start to finish; it didn’t matter who we were racing against. We have to give credit to Georgia; they are a top ranked team and they competed well today. We are a better team than we were a year ago, we’re a better team than we were a couple weeks ago and we are going to get better every single meet. I am looking forward to the rest of the season and our next test at the GT Invitational.”

The Yellow Jackets kicked off the meet with back-to-back wins in lane five in the women’s and men’s 200 yard medley relay.

Rodrigo Quadros Correia led the Yellow Jackets on the day on the men’s side with wins in the 200 freestyle and the 100 freestyle. For the women, Iris Wang took home first and second-place finishes in the 200 free and 100 free events, respectively.

The Yellow Jackets will return to the pool Nov. 17-19 for the GT Invitational hosted at the McAuley Aquatic Center.

In the 500 free, freshman Emily Ilgenfritz took fifth for the Yellow Jackets with a time of 5:03.11.

The trio of Jackets in Ruiu, Kira de Bruyn and Hepler took second, third and fourth respectively in the 200 yard IM.

Over at the dive pool, Carly Doi recorded a career best in her third-place finish in the 3-meter springboard with a score of 280.73. Doi placed fourth in the 1-meter with a score of 258.30.

In the other pool, Matt Casillas was the top scorer for Tech in the 3-meter springboard with a score of 357.00, while Nolan Mallet placed fourth with a score of 324.60. Casillas also placed second in the 1-meter with a career-best score of 326.70. Mallet scored 285.68 to finish in fourth.

In the 50 free, freshman Oskar Zimowski finished second with a career-best time of 20.88, while fellow first-year Jacket Aidan Pastel finished in fourth with a time of 21.10.