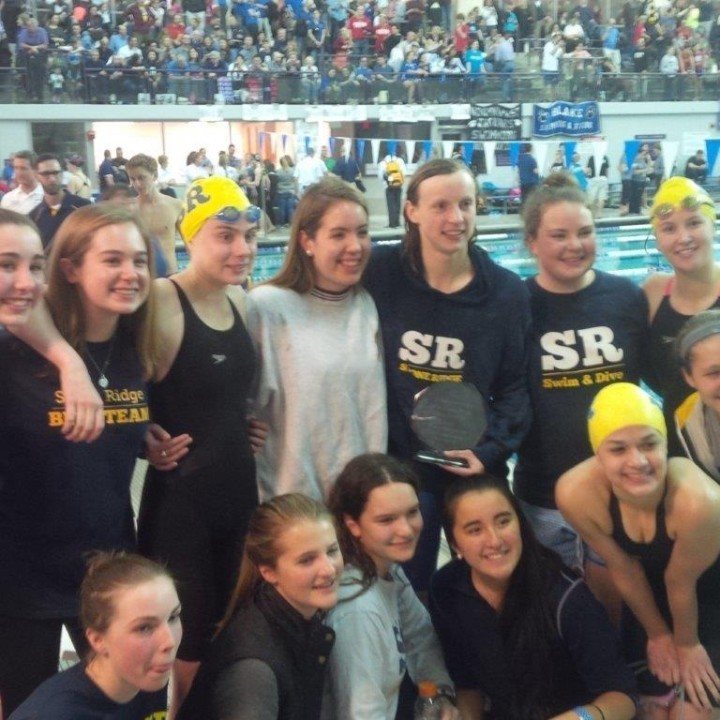 In a fabled mockumentary that satirically chronicled the travails of the fake British heavy metal band Spinal Tap, lead guitarist Nigel Tufnel explained to an interviewer one of the band’s distinctive features. The knobs on the amplifiers don’t just go to 10, said Tufnel: “The numbers all go to 11. . . . If we need that extra push over the cliff, ya know what we do? Eleven.”

Satire aside, it’s an apt description of Katie Ledecky’s speed in the pool. While her rivals strive to reach an all-out pace that’s the equivalent of a “10,” she has the exceedingly-rare ability to go beyond 10 and achieve the swimming equivalent of “11.”

That ability was on full display at the Washington Metropolitan Interscholastic Swimming and Diving Championships (“Metros”), where for the third year in a row she wowed the high-energy capacity crowd with record-setting swims. (Ledecky, who attends Stone Ridge School of the Sacred Heart, spoke about her high school swimming and other subjects in a post-meet press conference, which can be seen here.)

On Saturday night, in what was her final meet as a high school swimmer, Ledecky lowered her national high school record in the 200 free to 1:41.55 (see the race video here), turning in splits of 23.96, 25.49, 26.04, and 26.06. In the 500 free, she set a new American record on Friday night, 4:26.58, and was just slightly off that pace Saturday night, turning in a 4:27.88 (see the race video here). While already possessing an Olympic gold medal, and a slew of world records, Ledecky made clear in the post-meet interview that she still treasures high school swimming. there aren’t many superlatives left to describe her, but the meet did help cement her reputation as one of the greatest high school swimmers ever.

Her performances put a punctuation mark on an event that is consistently one of the fastest high school meets in the country. Two years ago, she recorded national high school records in both the 200 and 500 free, while Jack Conger (now a standout at the University of Texas) did the same in the 100 and 500 free. Last year, Carsten Vissering set a national high school record in the 100 breaststroke. And while Ledecky was the only national record setter Saturday night, nine other meet records fell:

Vissering and Hirschberger helped power Georgetown Prep to the team title on the boys side (see the team celebrate here), with both also notching victories in other individual events – Vissering in the 200 IM (1:50.83 — video) and Hirschberger in the 500 free (4:19.95). Hirschberger swam 4:17.13 in prelims — giving him two more years to drop a bit more than three seconds and potentially take down Conger’s national high school of 4:13.87 (a record that stood for 30 years before Conger broke it). Another member of the Little Hoyas squad, Harvard-bound senior Grant Goddard, also turned in victories in the 50 free (20.65) and the 100 fly (48.71 – video).

(Vissering, who is bound for the University of Southern California, spoke to SwimSwam after the meet and revealed that he is deferring admission to USC and will not be a student there in the fall. See the interview here.)

Churchill won the girls team title, despite only recording one individual victory (Hannah Lindsey in the 100 backstroke, 56.22) and one relay victory (200 medley, 1:47.96). But strong performances by Emily Wang (second in the 100 fly and the 100 back) and Elaina Gu (tied for second in the 200 free and fourth in the 500 free), coupled with second place in the 400 free relay, delivered victory to the Bulldogs. (Swim fans of a certain age will appreciate that Churchill is also the alma mater of celebrated breaststroker – and 1992 Olympic gold medalist – Mike Barrowman.)

Their swims, coupled with many other strong showings by underclassmen, are reminders that even with the departure of Ledecky and her “11” speed performances, Metros promises to be a marquee meet for years to come.

Especially enjoyed the Katie Ledecky and Carsten Vissering interviews. Loved hearing their reflections on their high school swimming experiences. Even to the greatest, there is something irreplaceable about high school swimming. Best to both of them as they take the next steps into adulthood.