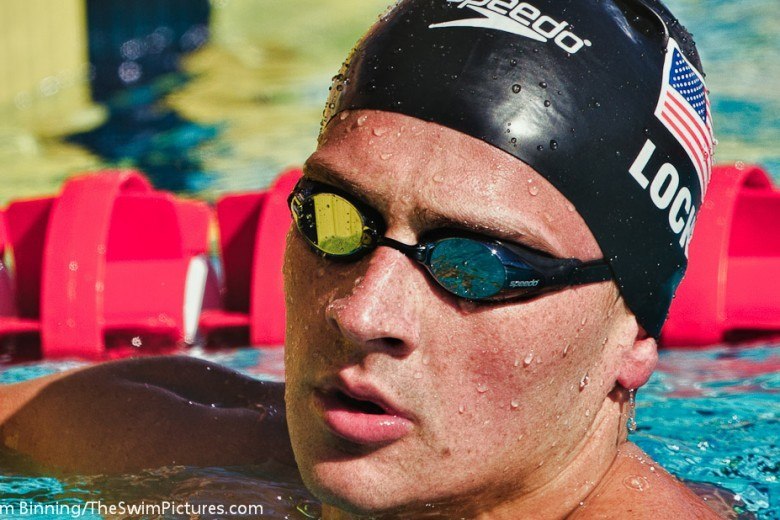 As the international portion of the Gator Swim Club was racing out in Santa Clara this weekend, the main American group was taking a much more low-key meet in at their home-team hosted GSC Summer Invite that began Sunday and will run through Tuesday.

This meet is flying; much like we saw in Austin, this is showing a bit of a rebellion by pro swimmers against the gigantic super-meets that have hours-upon-hours of preliminary sessions. Reports from on deck are that each prelims and final are lasting about an hour.

On the first day of finals, Ryan Lochte eschewed the two events most likely to be on his Olympic schedule (the 200 free and the 400 IM) in favor of a simple 100 breaststroke and 100 fly double. This is a sign that he’s comfortable with his training at this point of the season, and is just trying to work out very-specific kinks in his swimming.

He won that 100 breast in 1:03.87, beating fellow Gators Richard Munch (1:04.10) and Matthew Elliott (1:04.68). That’s actually an outstanding time at this meet; consider that it’s more than a second better than he was three weeks out of last year’s World Championships.

He also took the win in the 100 fly in 54.48, which is right about where he’s been when he’s swum this event this season. Bolles’ Joe Schooling, who is an outstanding young 16-year old butterflier that represents Singapore internationally, was 2nd in 54.91. Marcin Cieslak was 3rd in 55.25, though without swimming Polish Nationals, and coming out of a college season, he should be about as beat-up as we would see from someone like Lochte in February or March. Not a very good time, but similarly not a cause for concern either.

In the women’s 200 free, Elizabeth Beisel looked like she might still be flirting with the idea of going after a relay spot, after winning in 2:01.13, which is three seconds faster than we saw her in Charlotte in May.

In the men’s 200 free, absent Lochte, IX3’s Charlie Houchin took a big win in 1:48.93. His times have been extremely consistent this season around 1:48-high or 1:49-low; even more consistent than when he was training regularly with Sean Hutchison in Fullerton. That could be a good sign for him.

Ariana Kukors won the women’s 100 fly in 1:01.35, ahead of Icelandic Florida Gator Sarah Bateman (1:02.59) – who just locked up her Olympic qualification at the European Championships. That’s not a great time for Kukors, but it’s not terrible either.

Auburn commit Alex Merritt was 4th in 1:03.01, which is as fast as she’s been this far before her big championship meet. In the B-Final of this race, Ellese Zalewski, who had to miss NCAA’s to head back home for Australian Trials, had a very good 1:01.92. Beisel was 2nd in the B-Final in 1:03.54.

Full Meet Results not available online, but are on the MeetMobile app.

maybe kukors didn’t wear a tech suit? what was her time in the 2free yesterday?

The UF pool is a very slow long course pool. Very shallow on one end. The deep end is fast for short course meets.

Houchin has been consistent all year, I think he has a definite shot at the 800 free relay if he hits a really good taper before trials. As for Lochte’s 100 breast, good time especially for in season untapered, plus I realize that Ryan always swims slow in season, but didn’t Michael swim a 1:02 earlier this year? I always thought Ryan had a small advantage over Michael in the breaststroke. I’d think he would have wanted a faster time than 1:03. He’s not going to swim away from Michael in the freestyle leg of an IM, so he’s going to need to go into trials with the confidence that he can put distance on him in the breast leg.

Pretty sure I recall Rowdy commenting that Michael actually out split Lochte on the breaststroke legs in both IMs at the last Olympics. He gets it to where he needs to be in an Olympic year but otherwise it is his weakest stroke.