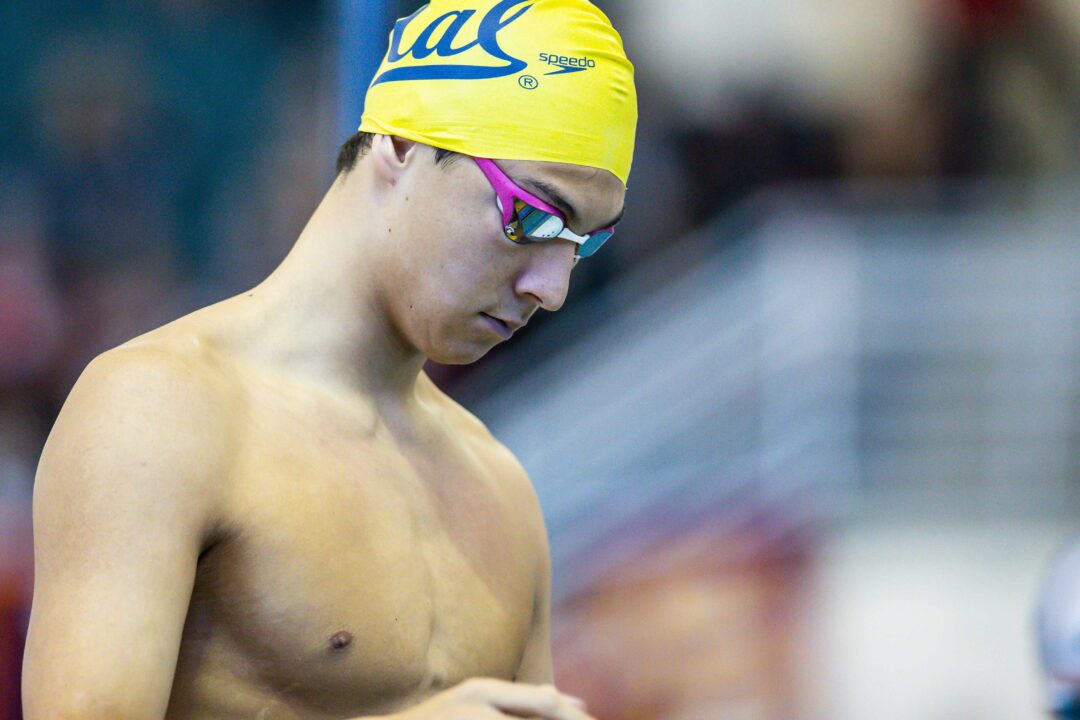 In #1 Cal's victory against #7 Stanford at the triple-distance meet, Gabriel Jett experimented with a discipline that he doesn't typically race and set PBs. Archive photo via Jack Spitser/Spitser Photography

Gabriel Jett continues to show just how much untapped potential he has.

After having a huge breakout year in the mid-distance freestyle and butterfly events last season, the Cal sophomore took on backstroke events at the Cal-Stanford men’s triple-distance meet on Friday and set three personal best times. In a unique competition format where swimmers raced in all of either 50/100/200-yard stroke or sprint free events, 200/500/1000-yard distance free events, or 100/200/400 IM events, Jett was one out of three swimmers to win all of his races.

Given Cal’s overall depth in backstroke, it’s unlikely that they’ll need him in the back events come time for championship season, but it’s still interesting to see him post formidable results while experimenting with the stroke.

The two other swimmers that swept their events at this meet were Stanford’s Preston Forst and Cal’s Destin Lasco.

Notably, Stanford’s best swimmer, NCAA champion Andrei Minakov, was not racing at this meet. He didn’t swim at Stanford’s season-opener against Utah last month either.

Ironically, MacAllister was Stanford’s medley relay backstroker at NCAAs and Hu is typically a breaststroker, so their positions on the 200 medley relay this meet were virtually swapped,

Ultimatley, Cal took the overall win, beating Stanford 202 to 174. Both Cal and Stanford will not be racing again until their mid-season invites.

Nothing makes me happier than Bjorn swimming anything over a 100. Dude is like the archetype of a sprinter. Taking the first 50 out four tenths faster than anyone else and losing by 6 seconds. Going 47.4/55.2 in his 100 splits. It’s perfect.

gabriel is such an exciting swimmer right now

Dude’s got three great strokes. Kind of want to see him throw down a 200/400 IM in December

Lol my first thought when I saw his results were “oh he could probably swim a really good IM if he wanted to”, so I’m with you on that one. As a refernece point: his yards IM PBs are 1:49.56/3:53.87 from high school.

Cal is weak in the 500, so it would be hard to take him off of that. But it does feel like he could pull out something great in the 200IM

I’ve always thought the best way to combine results in events like these is to *multiply* times rather than adding them. Still wouldn’t have helped e.g. Seeliger overcome the 200 free, though…

Should have let Bjorn do a 25

I wonder what watch for him at 7.9? I’ll believe it if it was with touch pads and a timing system.

In a sub 8 second race, touch pads and a starter’s horn would be mandatory.
Yes I realize my demands are unreasonable. No I will not change them.