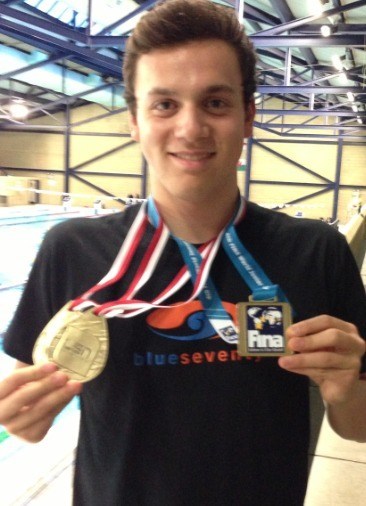 After observing the results of their young swimmers at the World Junior Championships in Dubai the leadership within British Swimming is very encouraged about their potential... (Image courtesy of Blueseventy)

The Nunawading Swimming Club located in Victoria, Australia has announced that Jol Finck has been appointed as the Director of Coaching.

After observing the results of their young swimmers at the Junior World Championships in Dubai the leadership within British Swimming is very encouraged about their potential. The team collected seven medals and High Performance Director Chris Spice was very pleased with those results, “We have half a dozen youngsters who could be very competitive come Rio,” Spice told BBC Sport.

“We probably slightly exceeded where we thought we were at.”

“A lot of medals at the juniors doesn’t guarantee medals at seniors, but what it does do is help identify those that are worthy of further investment,” Spice told BBC‘s Nick Hope.

The potential that the young British athletes showed is good news for a country whose senior program who over the last few years has continually under performed.

After a very poor showing at the Olympics, where they came away with three medals (one silver and two bronze), there were some very significant changes made.

High Performance Director Michael Scott resigned being replaced by Spice, Bill Furniss was hired as the National Team Head Coach, the organization had to restructure their funding strategy after having their overall funding cut by £4,000,000 and they made changes to their qualification structure for Barcelona putting the date of their trials much closer to the competition’s date.

Even though the changes have been made looking towards long term results there were results in the short term that looked encouraging after the World Championship Trials, but in the end Great Britain ended up on the podium only once at the World Championships with Fran Halsall winning a bronze in the 50 freestyle.

More changes are now on their way after it was announced last week that the orgainization will be reducing their funding for the Intensive Training Centres in both Swansea and Stirling, “What we’ll see is a different type of investment,” Spice told the BBC. “We are certain that Loughborough and Bath will remain the same.

“What we’ll absolutely be doing is still investing [in Wales and Scotland]. It’s just at what level and it may not be in one centre.”

Another change the new leadership has made is reaching out to their successful alum to help mentor their young up and coming athletes. Rebecca Adlington is one those alum and she believes that Spice and Furniss are taking the country in the proper direction, especially when it comes to how they approach racing, “Bill wants to boost the World Cups, the Mare Nostrums, stuff where they have got competition and they have got to step up and race fast. Otherwise they are not going to get anywhere,” Adlington told the Guardian.

“It’s completely different. Here you can rock up and know you’d come top two or round about whereas over there you do not have that same mentality. I never felt the same when I went to Barcelona, I was a lot more nervous.”

Adlington also went on to commend the new leadership for creating positive relationships with the athletes, something she felt was lacking with the past regime, “Bill has been so hands-on: even at [world championships] trials, he was on poolside,” she said “Dennis never used to be poolside – he used to walk around at the start and the end of the session and sit upstairs, he wasn’t hands-on. So many swimmers kept saying Bill came over and spoke to me and said ‘well done’ or ‘hard luck’.”

“It’s great that he is building a relationship – as a swimmer you have got to be able to go and talk – I never felt Icould fully talk to Dennis as I can with Bill and Chris. Even though I am not swimming they are approachable and you need as an athlete to be able to go up to them and say, ‘I am not happy with where I am, Iam thinking about moving, can you help me?'”

After being encouraged by the positive results of athletes such as James Guy, Sophie Taylor and Jessica Fullalove in Dubai it will continue to be interesting to see how effective the changes that leadership group in Britain have made to achieve the results they want to see from those swimmers in the future.