From Swim Fan to SwimSwam 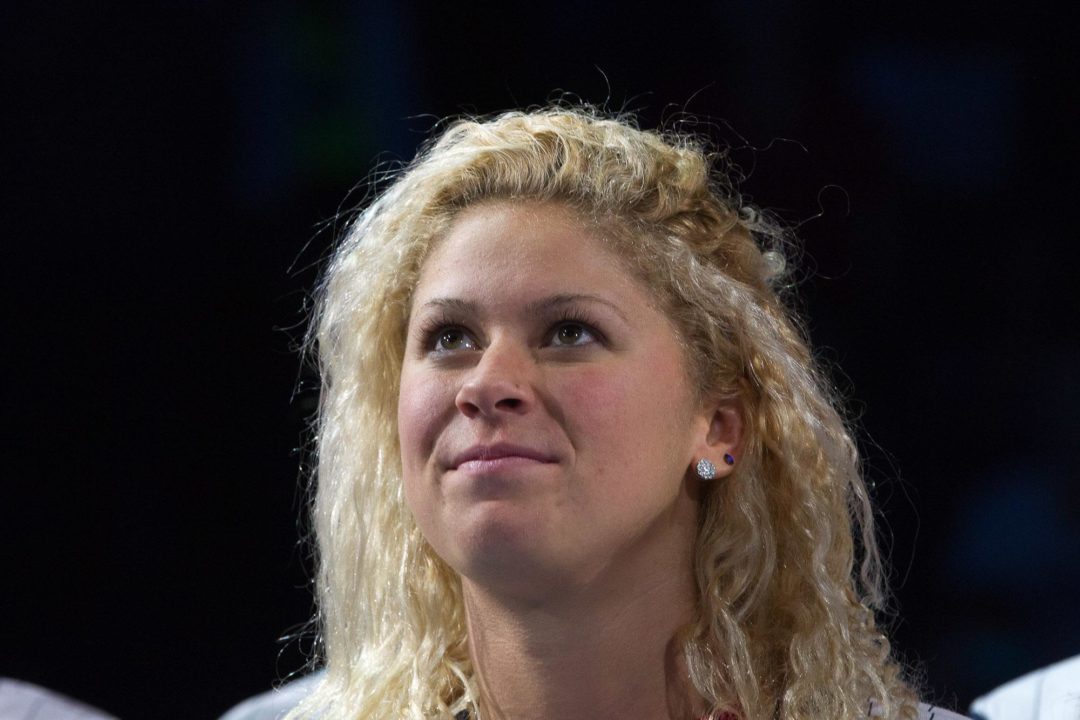 Superstars like Elizabeth Beisel have inspired many to venture into competitive swimming; few of those began at age 23. Ashley Wozny begins her journey now. (Photo Courtesy: ©Tim Binning/TheSwimPictures.com)

Never Too Old to Dream: A Swimming Neophyte’s Journey

One rainy Sunday morning, just about a month after the end of the Summer Olympics, I decided I wanted to become a swimmer.  Not to be cliché, but I felt so inspired watching the likes of Franklin, Beisel, and Schmitty… these girls have accomplished so much in their lives and are younger than me.  Instead of being discouraged, I was motivated.  It was a gradual process; Sunday through Tuesday I watched all of the YouTube videos about stroke technique, and read all of the blogs I could find.  I didn’t want to show up at the pool and just flail around, after all!  Later that week I went out and bought my first proper swim suit and goggles (took me about 20 minutes, plenty of texts and a tweet or two to decide), matching of course!  Saturday morning I went for my first swim.  I didn’t swim very much, or very far, but I was hooked.  I had read about the addiction to the water, but I really just thought swimmers were nut jobs that had ingested too much chlorine over the years.  Turns out I was wrong… there’s something to be said about a sport which never seems to plateau.

I first attempted the Week One: Workout One from the Speedo Pace Club’s Beginner Weight Loss category.  Only 950 yards – seems easy right?  Wrong.  It turns out swimming is a LOT tougher than the Olympians make it look on TV!  Embarrassing admission: I barely got through half of the workout.

After that first swim, even though I didn’t do well, I couldn’t wait to get back in the pool.  The following week I went swimming Wednesday, Thursday, Friday, Saturday, and Sunday; I just couldn’t get enough!  My slight obsession had grown to epic proportions.  I took time at work to soak up all the swimming knowledge and know how that I could, and spent time in class on twitter interacting with fellow swimmers (I don’t endorse this!), and that is how I got in touch with SwimSwam.

SwimSwam tweeted about swimming in college and I decided to respond to it regarding my situation: What is an inspired twenty-three year old with almost no swimming experience, aside from how-not-to-die-in-the-water lessons, who wants to begin swimming competitively to do?  Braden Keith was awesome enough to reach out and lend some advice; I owe him thanks because he was the person to point out how silly I was for not attempting butterfly.  He linked me to an article he wrote on teaching the stroke to children and beginners alike, and the way he explained it made more sense than any video I had watched… and I’m a visual learner.  Armed with this new knowledge, I went swimming that night and by the end had built up enough courage to give it a go.  It wasn’t graceful, and surely wasn’t Phelpsian, but I did it!   For the first time, I managed to swim butterfly for a full pool-length.  It.  Was.  Awesome.  I couldn’t stop smiling for the rest of the night.

I wasn’t as active as I should have been growing up but I did play soccer, volleyball, ran track, and have recently gotten into CrossFit, but not a single one of these sports have provided me with the results, the motivation, and the thrill that swimming has.  After only two months, I’ve made much more progress in this sport than I ever have in any other.  I’ve joined a Master’s team, and am swimming an average of 1,500 yards in each workout; a far cry from what some people can do, but I’m proud of it!  My current goal is to train hard for the next year so that I am able to qualify for Master’s Nationals in 2014.  It’s going to be a lot of work, but it is a challenge that I’m ready for!

I would be remiss to not mention the swimming community.  As I just noted above, the progress I’ve made in my swimming over the past few months has been much more than I could have ever dreamed of!  I truly believe this has been in large part to the wonderful people I’ve had the privilege of watching, meeting, or speaking to as of late.  Every single swimmer, coach, blog, and twitter that I have connected with has been so welcoming and supportive of my endeavors.  The swimming community, except for the one lady at the community center who never responded to me when I tried to make conversation, have been so kind and I couldn’t ask for anything more!

To any and all of you out there reading who are in the same position I was two months ago – get in the water!  You will not regret it!  I am so thankful that I jumped in that first time, that I’ve been able to learn so much, and that I was invited to share my story.  My journey in this sport is just beginning – I’ve got a lot of kick sets, drills, endurance building, jargon decoding, and pain ahead of me but I cannot wait for it.  If I’m lucky, I’ll get to share it with you!

Welcome to the swimming community– you’re now in it for life! Just wanted to say fyi, you mentioned that you wanted to qualify for USMS nationals for 2014. In case you want to try it sooner for 2013, or in case you can’t quite meet the qualifying times, the last time I checked, competitors may enter up to three individual events without meeting the national qualifying time. I’ve gone twice despite having only qualified in one event, and still had a blast.

Thank you! I’ve replaced my usual BVLGARI perfume with the lovely scent of Chlorine and I’m not even mad!

I really appreciate this tip! A lot of work can be done in 6 months, give or take, and I have gotten really lucky having an awesome Master’s Coach who’s been helping me develop my technique the past few weeks. I shall revisit this idea come March!

hahaha You can still wear the BVLGARI too! Check with your coach to make sure the 3-event rule still applies. If so, I’d go no matter what, because it will inspire you even further. My first nationals, I was 2nd to last in two of my events and dead last in one of them, but my teammates didn’t even notice, they were just thrilled that I was there hanging out with them and swimming my best times.

You’re right – I do need something to mask the chlorine! I do kind of love it though.. reminds me of the hard work I put in.

I’ll check into it this week! I’m hoping to compete in some statewide meets first.. start small and then attack the big dogs!

I can confirm that the three-event rule still applies. The current prevailing philosophy behind USMS Nationals is one of participation, because it’s more than worth the experience for anyone who wants to take part. I often encourage new swimmers to come check out a Nationals… many of them go back more than once 🙂

The best way to keep masters swimming fun is to set some boundaries. I speak from experience. Avoid volunteering. Resist interacting with the people in charge. Don’t accept the things you hear at face value. Decline invitations to join committees, and never go to one of the national conventions. Veer away from social situations involving alcoholic beverages. Bring your spouse, significant other, or close friend along whenever possible. Those are the basics. Have fun, and good luck!

Anyway you can link to the Braden Keith article???

Certainly! Here it is: http://swimswam.com/2010/03/my-golden-method-for-teachingimproving-butterfly/