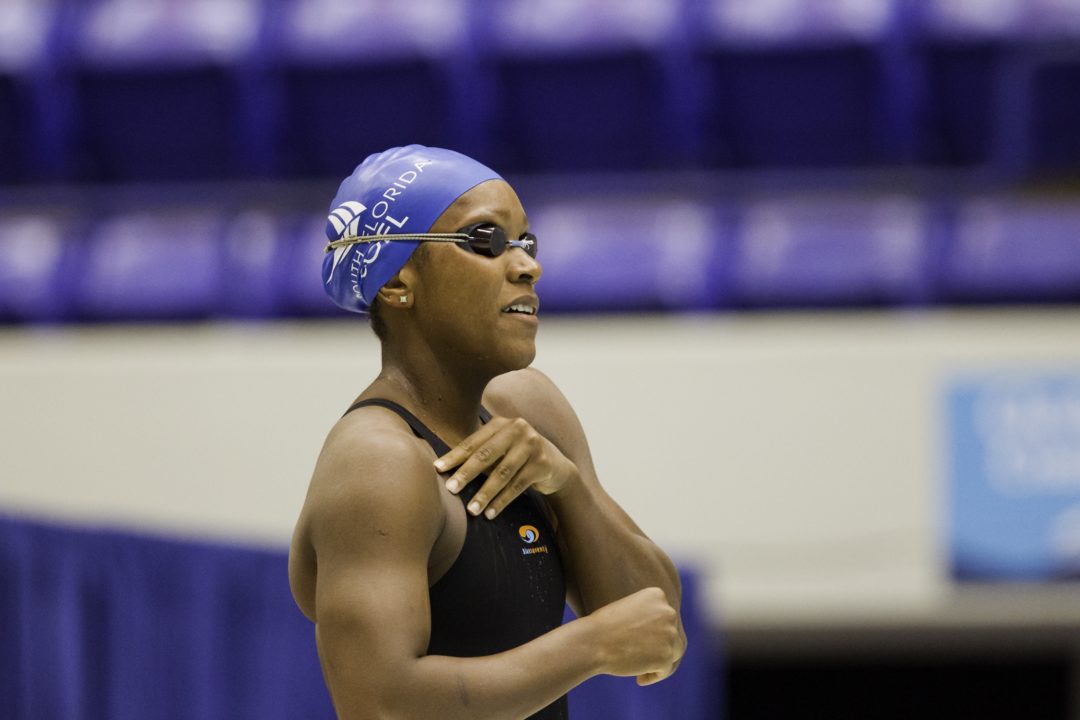 For the 2nd night, Jamaica's Alia Atkinson was the story of the night at the 2012 Canada Cup (Photo Courtesy: ©Tim Binning/TheSwimPictures.com)

This report was contributed by Mike Thompson, a Canadian swim coach and journalist, who is one of the leading voices in Canadian swimming. Check out his blog at CoachMikeSwim.Blogspot.com, and his weekly Canadian-themed podcast here. You can also follow him on Twitter at@CoachMikeSwim.

Alia Atkinson racked up another 2 victories on day 2 of Canada Cup in Etobicoke, ON. Alia won the women’s 50 breast in Canada Cup record time of  29.87; a record which she previously set in the preliminaries earlier in the day.  Martha McCabe and Tera Van Beilen were second & third respectively with 31.34 and 31.58.

For Atkinson, that was another Jamaican Record, and pushed her to 10th of all time. Atkinson is so incredibly strong, which is how she won an NCAA title (though in the 200) at A&M. Her long course has really come a long way since then, including a 4th-place finish at the Olympics in the 100 in 2012, but her short course hasn’t suffered one bit. Atkinson’s best swimming may be yet to come, and it’s encouraging to see the South Florida trained swimmer sticking around in the sport for now.

Alia also won the 100IM in a time of 59.96 (another personal best and National Record), but was dethroned in the 50 fly by 16 year old Noemie Thomas of Vancouver. Thomas clocked a 25.99 to Alia’s 26.85 and Katerine Savard’s 27.00. Savard had won the 200 fly earlier in the day over the hard charging Thomas (2:08.84) who ran out of pool to finish just behind Savard (2:08.52); she was also just .22 seconds off of Savard’s National Age Group Record in that event.
The crowd-pleasing race of the night on the men’s side was either the 200 free where Dominique Massie-Martel of Laval University came out swinging from lane 1 to win in a time of 1:47.78, well ahead of the rest of the field (Zanatta 1:48.23 & Allen 1:48.62). If not that, then the biggest cheers were drawn by the ultra-tight mens 100 breast final where Dillon Peron of the University of Manitoba squeeked out a victory (1:01.32)  against Toronto’s Warren Barnes (1:01.35).
Other highlights of the evening included:
– 18 year old Edward Liu winning the men’s 100 fly in 53.12 in what would be deemed an upset. Coleman Allen of Vancouver was 2nd (53.52) and Daniel Ramirez of Oklahoma Baptist University was 3rd (53.64).
– Karyn Jewel won 400IM (4:40.36) ahead of Ottawa’s Erika Seltenreich-Hodgson (4:42.45) and Toronto’s Vanessa Treasure (4:43.60).
– Canadian Olympic Team Member Andrew Ford of Guelph, ON won the 200IM in a season best 1:59.30 just ahead of Zach Summerhayes of the University of Toronto (1:59.84) & Serbian National (University of Calgary) Bogdan Knezevic (2:00.68).
– The always exciting Canadian Women’s 200BR was highlighted by Canadian Olympians Martha McCabe (2:23.20) and Tera Van Beilen (2:28.07) who finished 1st and 2nd respectively. 3rd was Sophia Cieplucha from Georgetown, ON (2:29.41).
Live results can be viewed here.
Canada Cup ended tonight Canadian Swimming will turn it’s attention to “The Big Splash”, (Canada’s version of The Golden Goggle Awards) on Monday November 26th in Toronto. Live webcast of the event can be found here.