Wozny: Not All Pools Are Created Equal 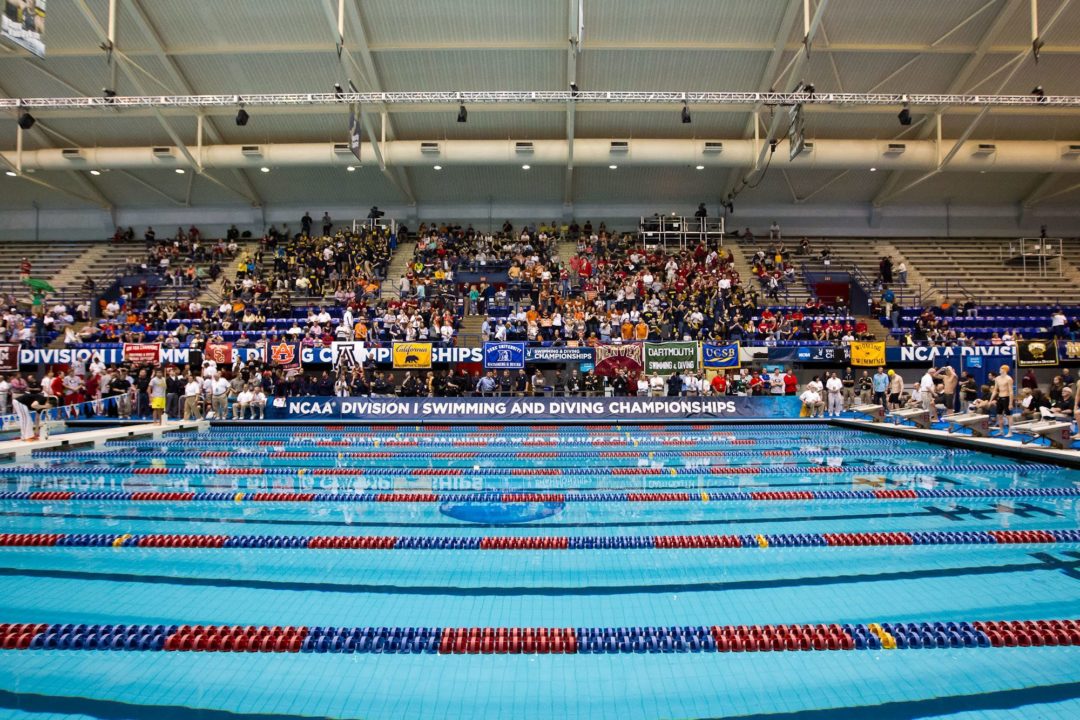 A pool is more than four walls and some water. Every pool has a special meaning and feeling to each of us. (Photo: Tim Binning/TheSwimPictures.com)

Our workout today comes from Mount Kelly Swim, and is meant to be a simulation of a swim workout with a warm up, activation, and main set

I got to thinking the other day about how many different pools I’ve had the chance to swim in since last September. There have been about nine if I am remembering correctly. From the outside looking in you might think that they’re all the same: chlorine, water, lane lines, maybe an overflow gutter if you’re lucky. Most of you, I’m sure, know differently. When I went on my swimming research binge, I read all about pool variances with a raised eyebrow. How does pool depth or temperature, or anything else for that matter, affect my swimming? This point is proven more resolutely as the amount of different pools I swim in increases and I gather first hand experience. Also proven is that not all pools are created equal.

The very first pool I swam in was Oakland University, my alma mater. I cannot say how happy I am that I dove in here to begin with. It’s very possible that I’m biased, but in my humble opinion nearly everything about this pool is perfect. Good temperature, chlorine levels aren’t out of control, and on Sunday mornings it’s usually set long course, which is nice to shake things up since I typically train SCM. This aquatic center also has three pool records set by Olympians: Peter Vanderkaay set his American Record in the 500 Free there, Kara Lynn Joyce is on the board for the 50 Free, and Allison Schmitt for the 200 Free.  The geek inside me gets so excited to swim in this pool every time I get the chance.

Quite a few of the other pools I’ve swum in have been so incredibly bad that I think I might’ve given up on the sport had I started there. The second pool I swam in when I first began was just… so bad. There are only three 23 yard lanes (…what?), it was about 85-90 degrees (is this a pool or a spa bath?!), and they don’t allow PAYING PATRONS to use any of their equipment. The only reason I frequented this place for so long was because it was close. I’m pretty sure no one that goes there really knows how to swim; most times I went I had to share a lane with someone who took two and a half minutes to get from one end to the other.  Nothing against “lap swimmers,” but kindly remove yourself from my lane if you’re not even going to ask if you can join me then proceed to crowd me.  I recently went back to this pool after about 3 months of training at my new pool and a few things happened.  First, I was so shocked at how fast the walls came when before they seemed to take forever.  It was really awesome to see such a definite sign of my progress.  Second, since this pool is at a community center it’s built for open swim too which explains the temperature.  I’ve learned that I have absolutely no desire to ever swim in a pool like this again without goggles… guess I’ll just stick to the rivers and lakes I’m used to.  Third, and last, one of these aforementioned lap swimmers gave me the funniest compliment ever:  You’re so great – you look like a dolphin in the water!  Well, thanks… I think.

I have just returned from a trip to London – the thought of staying dry for a whole 8 days sounded horrific so I made sure to find a pool within close proximity to my hotel.  Luckily, I found one that was less than a mile away.  It was really great to do something familiar while on vacation, but I’m still not sure if I’d consider it just as bad or worse than the crap pools I’ve swum at in America. Just to give you an idea, it was a standard 25m pool but it only had 3 lanes and each were maybe 13 feet wide. I had never really considered the importance of lane lines until that day; it was like swimming in the middle of the ocean without enough of them. The walls were covered by these 6×12 tiles that were slippery as all get out so I really couldn’t flip turn, and I’m pretty sure the shallow end was about 1m deep. The only good things that came out of this swim was getting to spend some time with a friend from Germany and my fly felt better than it ever had before.  However, I feel like I can attribute the latter to a slight drop in altitude.

A few weeks ago I participated in an indoor triathlon – my first one – and I ended up coming in second place in my age group. The format was 20 minutes to get as much done in each event with 10 minutes in between. Naturally, I was most excited for the swim. I don’t typically ever just swim laps, so I was curious to see if I could actually swim the entire duration and how far I could go in that time. Turns out I could swim for 20 minutes straight and I went 1000m. Until that day I had only swum about 300m at once so this was a major accomplishment for me! My lungs were on fire but I refused to stop. My turns felt good (it had a depth of 14 feet at one end – molto buono!), and my stroke was so consistent. Not only was this my first triathlon, it was also my first sort of competition in the water. I’m sure that had something to do with my resolution to not stop. I also fell into the most comfortable pace; I could have gone another 500 meters. Oddly, this pool was quite warm as well but everything else about the swim was so great for me that I hardly minded.

On a more personal note I’ve got my first meet in sight!  Because I’m a lot ambitious, and a little ridiculous, it’s long course and outdoors.  Crazy, right?  Every blog and article I’ve read about swimmers at their first meet, whether it be ever or just in a long while, was about them racing a 50 or 100 stroke just to get back in the swing of things.  Me?  Hahaha, I’m shooting for the 200IM and the 400 Free.  I might throw a 50 in there just to shake things up and alleviate some of the nerves, but that’s wholly dependent on what the line-up ends up being.

I know I say this nearly every time I post, but I can absolutely not believe how much progress I’ve made in 6 short months.  I’ve met so many great people and I appreciate every single one of you who reads this – you keep me motivated.  My times might not be fast enough to qualify for Nationals yet, but I’m getting close.  Stay tuned for greatness!

Have some fun and start tracking the pools you swim in. A few years will go by, you’ll look at your list and the memories of the pools, the people you met, the town, the workout you did will flood back.

As far as entering the 200 IM and 400 free at your first Masters meet: more power to you! If you’ve put in hours of training, why waste it on just a 50? If you really want some fun, go for the 400 IM, the Greatest Race Of All Time.

Your question is exactly how I feel… not to discredit sprinters, but the 200IM is a better amount of 50s for me.

I actually laughed out loud at the mere suggestion of the 400IM… maybe one day, or later in the year. As much as I don’t want to limit myself, I’m not sure I’m up for that kind of torture just yet!

Thank you! My coach was a little shocked when I told her my plans, but I think it just goes to show how serious I’m taking this. My original decision was to do the 50 fly, 400 free, 100 back, AND 200 IM… but that just seemed way too scattered.

I’ll be sure to write about my results afterwards!

there was one pool i had to swim in during summer league… it was 30 meters long, so converting times to anything meaningful was impossible (i swam swimming 50s back then, and 60 meters doesn’t mean much compared to 50 yards). 100’s would have been better because they swam 3 lengths, or 90 meters which isn’t far off 100 yards, but the only “100” i got to do was the 100 IM, which was a 120 compounding that it was probably less than four feet deep the entire way down, and definitely 3’6 of lower of a good bit but the craziest part was the blocks. for whatever reason they were not really anchored down, which meant they could be… Read more »

Oh my gosh, those blocks sound mildly terrifying! I can’t imagine that being very safe; did anyone have any accidents? Also, they let you dive into that shallow of water? I wish I had that option at my pool.. I need to get my butt on some blocks and start practicing my starts ASAP.