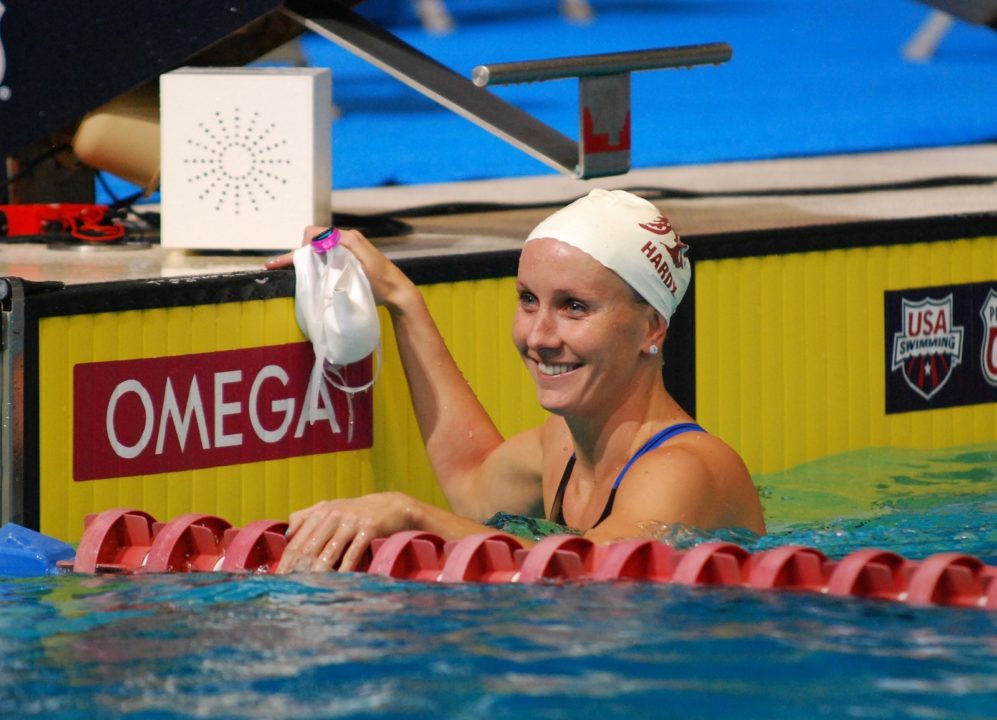 Jessica Hardy has swum in many swim meets. Ashley Wozny has not. (Photo: Janna Schulze/SwimSwam.com)

Considering the fact that I’ve only been swimming since last September, and only actually training since late November, something that’s been on my mind is ‘when will I actually feel like a real swimmer?’  Will it be after a full year of training?  After I’m able to swim a certain amount of yardage?  After I swim a certain time?  USA Swimming Correspondent, Mike Gustafson, mused that “you’re not a real swimmer until you complete a long course 200M fly.  No one-arm.  No DQs.”  If that’s the case, I might as well just stop writing now because there is no way in you-know-what that will ever happen.  Fact is, because I started so late I’ll probably always feel a little less legitimate.  Never having experienced waking up for morning practice, weekend long meets, tortuous sets that have to be repeated because someone won’t do it right, etc.  But I can officially say that I feel a little bit more like a real swimmer after having competed in my first meet.

If you read my Not All Pools Are Created Equal blog you might remember that my plan was to swim the 400 Freestyle and the 200 Individual Medley with a possible 50 thrown in there.  Well, I learned the hard way why elite swimmers don’t participate in many outside shenanigans when they’re in training.  A month or so ago, I was out playing tennis and I rolled my ankle about five minutes in.  I walked it out like a good sport until it stopped hurting, so I thought all was well.  Not so fast, champ.  Later that evening I could hardly walk up stairs, and it was swollen pretty badly.  Two weeks later it still hurt to dolphin and whip kick, so I unfortunately had to scratch the 50fly and the 200IM.  I did, however, still swim the 400 Free.

I’m not a very intense person by nature, so the whole listening to my iPod and shutting out the world before my event bit just wasn’t going to cut it.  Instead, I sat around joking with my family and friends, did some dancing, and had fun… there’s even a video of me jumping into the pool with glee and a funny face.  The happy-go-lucky schtick is more my style; just call me the Missy Franklin of Master’s Swimming!  I think the most difficult part about it all was right before my race.  The day before was the first time I ever got up on a starting block.  I must have practiced at least 30 dives, which is not too many, but enough for me to get a general idea.  Coming into the sport later in life has many advantages, and having high body awareness is one of them; I have been fortunate to pick up on a lot of the technical aspects of swimming fairly easy.  My Mom had some quick reflexes and got a sweet shot of me diving; turns out I totally smoked the dude next to me, which made me feel pretty great!  I expected nerves, but as I stepped there was not a single butterfly in my stomach.  I felt calm, cool, collected, and ready to GO.  As I stepped up I remembered something my friend, and SwimSwam contributor, Troy Gennaro, told me.  He said “don’t freak out, its the same distances and strokes that you do everyday in practice. If you can do it there, you’ll do great!”  Thanks buddy!

I definitely picked the right meet for my first; it was incredibly casual and low key.  My coach came to support me and was notably the only person actually cheering for anyone.  Wozny Nation totally ran that pool deck during the 400 Freestyle.  Having the important people in my life there meant everything, and they pretty much swam the race with me in spirit.  I might not have been moving very fast, but they certainly kept me going.  Regarding my time, you all have to pinky promise not to laugh at my turtle paced swimming.  My fastest SCM time had been 7:28.25 (converted to 7:34.64 LCM), which is what I entered as.  I was a little nervous about being the slowest in the pool, so my main goals were to not finish last, and keep my stroke together as much as possible.  Not only did I achieve the first goal, I also bested my time by quite a bit.  I never properly timed myself in a LCM pool so I’m not sure how much of an improvement this swim actually was, but I touched at 7:16.10.  Yes, that’s a really slow 100… I’m well aware.  However, between my performance at the meet, and the swims I watched at Trials in Indianapolis, I’ve got plenty of motivation to take back into the pool with me!