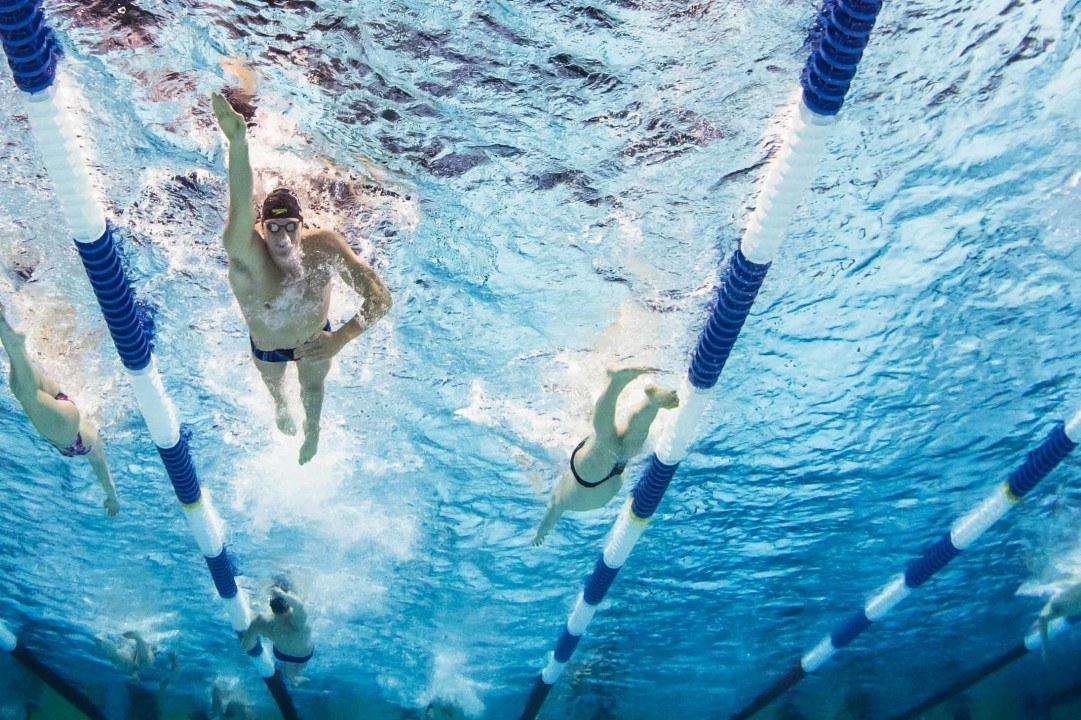 The Fresno State women won the Beach Cup this past weekend, which included San Diego, Marymount, and Pepperdine. San Diego wound up in 2nd, with Marymount and Pepperdine in 3rd and 4th respectively. Read on for full recaps from each team. Stock photo via Mike Lewis/Ola Vista Photography

The Fresno State women won the Beach Cup with 817.5 points this past weekend, which included San Diego, Marymount, and Pepperdine. San Diego (589) wound up in 2nd, with Marymount (404.5) and Pepperdine (321) in 3rd and 4th respectively. Read on for full recaps from each team.

SAN DIEGO – The Fresno State swimming and diving team’s 239 points through day one of the Beach Cup in San Diego on Friday afternoon has given the Bulldogs the lead over San Diego (184), Loyola Marymount (131) and Pepperdine (112) through six events.

“We got off to a good start today,” Fresno State head coach Jeanne Fleck said. “It’s been an important week for the team training and bonding in San Diego and I have a feeling we’ll swim even better tomorrow.”

Senior Leah Hatayama and freshman Ugne Mazutaityte both placed first in freestyle events and freshman diver Irina Nikolaeva scored the highest in the 1-meter dive to set the pace for the ‘Dogs.

Hatayama won the 50 free for the eighth time this season with a time of 23.75 seconds, .64 seconds faster than second place. Ally Short (So), Katelin Britton (So), Tarryn Rennie (Jr), Hannah Nabors (So) and Brooke Rodriguez (Sr) all scored points for the Bulldogs in the event.

“[Hatayama] has a lot of confidence this year,” Fleck said. “There’s a lot of tough competition in the Mountain West in the freestyle this season and it will be exciting to see how that motivates her as we get closer.”

Mazutaityte, most notably known for her strong backstroke performances, won the 500 free (5:05.84) by 3.81 seconds. Other ‘Dogs notching points in the event were Casey Kennemann (So), Danielle Powers (Sr), Vanessa Dugan (So) andEmma Monnich (Fr).

Fresno State’s divers grabbed the top three spots in the 1-meter event, led by Nikolaeva’s personal-best score of 286.35. Shelbie Holden (Jr) took second with 271.35 and senior Lacie Ruth rounded the Bulldogs out with a score of 258.75.

The Bulldogs came in second and fourth in both the 200 medley relay and the 800 free relay.

“This was a really good meet,” Fresno State head coach Jeanne Fleck said. “We have a lot of depth this year, so even when we don’t place first, we have a lot of swimmers earning points, and that’s really important in these meets. However, we need to work on some little things and sharpen up. We need to get better and we’re excited to get back home and finish off with a bang against San Jose before the Mountain West Championships.”

Mazutaityte continued her dominance in the backstroke events as she won the 100 back with a swim of 57.52 seconds and the 200 back by 8.87 seconds faster than second place with a time of 2:01.77. The Bulldogs took six of the top seven spots in the 100 back with strong supporting swims from Lindsay Ruiz (Sr), Kali Conlon (Jr), Emma Monnich (Fr),Ally Short (So) and Karissa DeRousseau (Sr).

The Bulldog divers continued their strong performance this weekend as they took the top three spots in the 3-meter event courtesy of senior Lacie Ruth (256.85), junior Shelbie Holden (249.90) and freshman Irina Nikolaeva (244.45). The divers will now head to the UCLA Bruin Diving Invitational on Sunday to compete in the platform dives.

Fresno State’s final meet before the Mountain West Championships will be at home against San Jose State on January 30 at noon at the Fresno State Aquatics Center.

SAN DIEGO, Calif. – The Toreros swim and dive team completed day one of the 2016 Beach Cup on Friday at the USD Sports Center Pool. After the first session of competition Fresno State leads with 239 points followed by USD (184), Loyola Marymount (131) and Pepperdine (112).

Bri Jurries earned the Toreros only individual victory of the day when she beat LMU’s Hannah Calton by just over half a second with a 2:07.41 in the 200 IM. Jurries also contributed to USD’s first place finish in the 200 medley relay. In total USD won three of the five races on Friday.

Sisters Danielle and Jackie Taylor were big contributors to both relay victories – 200 Medley and 800 Freestyle – and added second and third place finishes in the 50 free. Danielle set a personal best during the first 200 meters of the 800 free relay finishing with a 1:51.90.

The teams will be back in the pool tomorrow at 10:00 a.m. for the second session of the Beach Cup. The third and final session of the event will take 1:00 p.m. tomorrow.

The Toreros started Saturday’s action with the team of Jackie Taylor, Bri Jurries, Danielle Deiparine and Danielle Taylor taking second place with a 1:38.46 in the 200 free relay.

J. Taylor earned two second place finishes on Saturday while anchoring three relays. In the 200 free she finished 1:55.49, less than a second off of first and in the 100 free she swam a 52.88.

USD also received strong contributions in the backstroke events from senior Sarah Reierson. Reierson placed second in the 200 back with a 2:10.64 just in front of USD teammate MK Clancy (2:12.05). In the 100 back Reierson earned a third place finish with a 1:00.91. She also contributed to the 400 medley relay team with Jurries and the Taylor sisters that came in second with a 3:55.05.

Sammi Cohn placed fourth in the 100 breast with a 1:08.74. Overall the Toreros recorded 25 top-five finishes over the tree sessions. Freshman divers Lexi Held and Elizabeth Petty added 24 points over the two days of competition.

The LMU swim team sits third overall after one day of competition at the 2015 Beach Cup. Fresno State (239 points) leads the pack of four teams, followed by San Diego (184), LMU (131) and Pepperdine (112). The two-day competition is being held in San Diego, Calif., and is hosted by USD.

The Lions also had a pair of top-five finishes in the 50 freestyle, with Kristen Brennand taking fourth in 24.98. She was followed shortly thereafter by Kristen Clarno at 25.07.

On the relay front, LMU’s A relay in the 200 medley and 800 freestyle took third place. Kailee Mora, Mary Kate Reid, Calton and Brennand combined for a time of 1:49.38 in the 200 medley, while Stephanie Horwitz, Clarno, Isabel Willisand Calton finished the 800 relay in 7:50.13.

Individually, Horwitz (5:14.37) found herself just outside the top-five in the 500 freestyle, earning sixth place overall in the race. The same was true for Mora in the 200 IM, as the junior placed seventh in 2:11.98 to earn seven points for the Lions.

The LMU swim team finished third overall at the two-day 2016 Beach Cup, swimming against Fresno State, San Diego and Pepperdine in San Diego, Calif. The Bulldogs won the team competition with 817.5 points, followed by the Toreros (589), Lions (404.5) and Waves (321).

Kristen Clarno, who led the Lions in the 200 freestyle with a fourth-place finish (1:55.97), helped LMU to a pair of top-five finishes in the 100 freestyle, claiming third in 54.15. She was followed shortly thereafter by Kristen Brennand, who matched Fresno State’s Hannah Nabors for a tie of fourth with a time of 54.53.

Stacy Maier contributed a fourth-place finish for the Lions in the 200 backstroke, earning 11 points in the team score after touching the wall in 2:13.69.

Stephanie Horwitz took to the water in the meet’s longest event, the 1650 freestyle, placing fifth overall with a mark of 18:04.92. Mary Kate Reid also managed a top-five finish, with her fifth-place finish coming in the 100 breaststroke (1:08.83), before Mora returned to the water after her fourth-place finish in the 100 butterfly to take fifth in the 200 breaststroke (2:28.24).

LMU’s relay teams finished in the top-three in all three relays on Saturday, including taking second in the 400 freestyle. Clarno, Brennand, Isabel Willis and Calton combined in the 400 free relay, turning in a time of 3:34.03. The Lions finished less than a second out of first in the 200 freestyle relay, finishing third behind Fresno State (1:38.40) and USD (1:38.46) with a time of 1:39.23.

The Lions will return home for their next meet, hosting Pacific on January 23 at 1 pm. The meet will be the final home meet of the year, and the last event before the annual PCSC Championships, and will serve as LMU’s Senior Day.

SAN DIEGO, Calif. – The Pepperdine women’s swimming and diving team completed competition on day one of the Beach Cup hosted by San Diego, finishing with 112 points.

Jessica Mosbaugh (Los Alamitos, Calif./Los Alamitos HS) had the Waves highest finish on the day, placing third in the 200 IM with a 2:08.00.

Allison Naasz (Lodi, Calif./Tokay HS) finished fifth in the 200 IM as well and Julia Sneden(Charlotte, N.C./Providence Day School) was just behind her in sixth, giving the Waves three of the top six spots in the race.

The Beach Cup concludes tomorrow. It is the Waves final event of the regular season before they host the PCSC time trials on January 30.

SAN DIEGO, Calif. – The final day of competition at the Beach Cup took place on Saturday and the Waves finished strong at the meet after just 10 days of training after the mid-season break.

Sabrina Altman (Kula, Hawaii/Seabury Hall) scored a ninth place finish in the 200 backstroke and Naasz finished seventh in the 100 free.

The Waves scored well in the 200 breaststroke with a Lauren Allard (Arlington, Va./Yorktown HS) finishing seventh with a 2:31.77. Chan Finished eighth and Henley finished ninth.

Pepperdine finished the day with the 400 free relay, finishing sixth.

The Waves will be back in action on January 30 when they host the PCSC Time Trials.