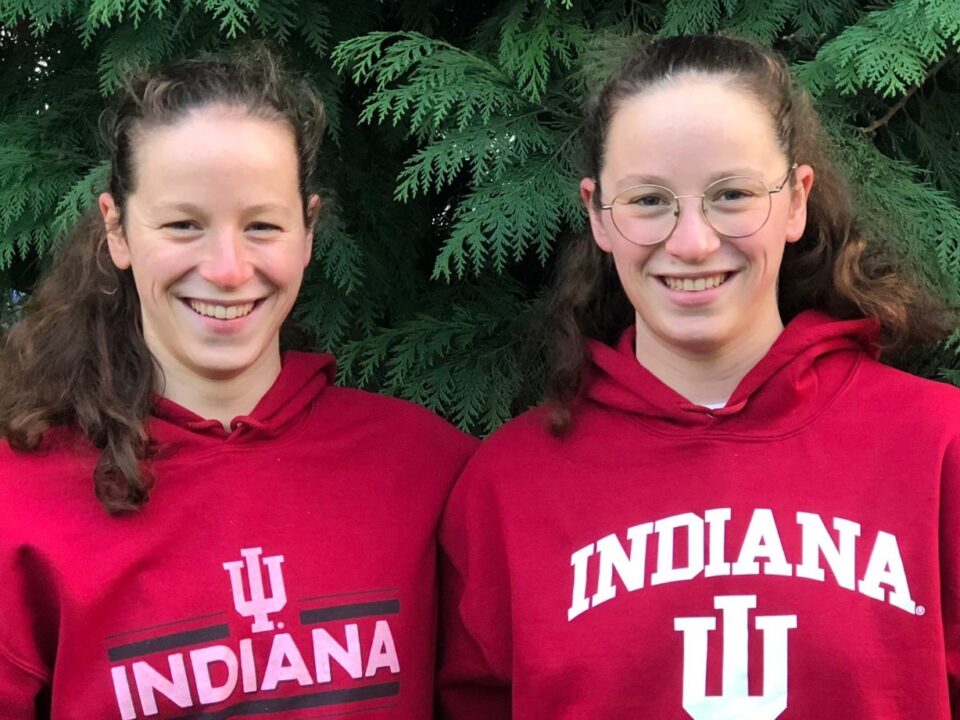 France's Delmas twins, Lucie and Justine, will be immediate impact players when they arrive in Bloomington for the 2024-25 school year.

Justine Delmas and Lucie Delmas, 17-year-old twins from the Paris suburb of Conflans-Ste.-Honorine, have announced on their respective social media accounts that they have verbally committed to attend Indiana University together. The high school juniors will graduate in June 2023 but will remain in Paris to prepare for the 2024 Olympic Games. They will head to Bloomington in the fall of 2024.

The sisters train under head coach Guillaume Benoist at CNO St.-Germain-en-Laye and have been a sensation in French swimming for the past six years, when they began breaking French regional and national age group records at the age of 11.

“I’m very happy to announce my verbal commitment to continue my athletic and academic career at Indiana University ! 🇺🇸 I can’t wait to join this new amazing team with the head coach @raylooze and other coaches @emeaton1 @longjos134 @corychitwood 😈 Proud to be a futur Hoosier 😋 A huge thanks to all the people who have given me this opportunity 🤩 Go HOOSIERS 🔴⚪️”

Justine specializes in the 50/100/200 breast and 400 IM. She made the French senior team for FINA World Championships (25m) in Abu Dhabi in December. A week earlier she was crowned national champion in the 50 breast, 100 breast, and 200 breast at the 2021 French Short Course Nationals. She also competed for France at the European Short Course Championships in November. In July, she competed at European Junior Championships, where she won the 200 breast and broke the French National record (2:25.12). She also contributed to France’s silver medal in the 4×100 medley relay with a 1:07.5 breast split. Those performances put her on the French senior team for short course Euros and short course Worlds.

Justine has also shown promise in IM and mid-distance freestyle, the latter of which could earn her a spot on freestyle relays, in addition to the medleys. Her converted 200 breast time would have won the conference title at 2021 B1G Championships. She also would have scored in the A finals of the 100 breast and 400 IM, the B final of the 200 free, and the C final of the 500 free. She would have been just outside of finaling range in the 200 IM.

“I’m very excited to announce my verbal commitment to Indiana University ! 🇺🇸 Very glad to continue my swimming and academic career at IU 🥳 Looking forward to joining this amazing team ! 🙂 Happy to be able to be coached by @raylooze, @longjos134, @emeaton1, @corychitwood ! Thank you to all the people who support me in this adventure ! 🤩 Go Hoosiers !! 🔴⚪️”

Lucie represented France this summer at European Junior Championships and took home a bronze medal in the 200 fly (2:10.44) and a silver in the 4×100 medley relay. Her 200 fly time was a personal best and broke the French NAG records for both the 16s and the 17s. She also went a best time in the 100 fly (59.06) which lowered the 16s NAG. She qualified for the French Euro Juniors team at French Nationals in June, where she earned her first senior national medals in the 200 fly (silver) and the 50 fly (bronze).

Lucie’s best times, converted, would already score at B1G Championships in the A finals of the 100 fly and 200 fly. She would have placed 3rd and 2nd in the respective events, and she would have been IU’s top performer in both. She also would have made the C final of the 400 IM and 200 breast.

Holy they’re Both so good wut 💀

*They are the first verbal commitments for the class of 2028