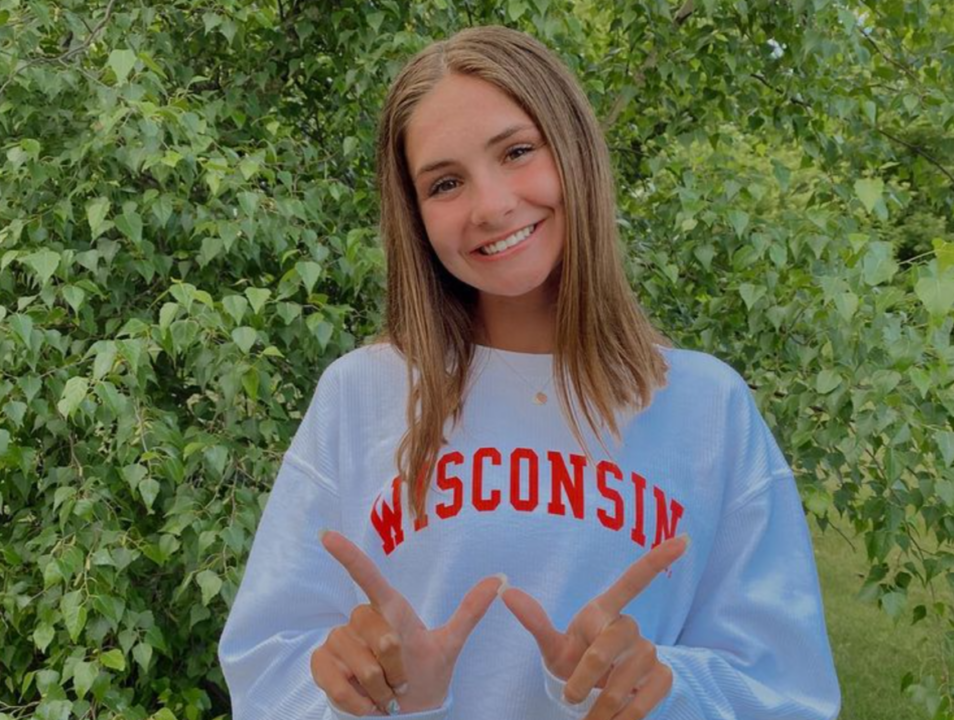 Freestyler Abby Reid has announced her commitment to remain in-state and swim for the University of Wisconsin, adding to a large pool of in-state swimmers. Current photo via Abby Reid

Freestyler Abby Reid has announced her commitment to remain in-state and swim for the University of Wisconsin.

“I am so excited to announce my verbal commitment to continue my academic and swimming career at the University of Wisconsin!! Huge thank you to all my family, friends, coaches, and teammates for the constant support and encouragement! Go badgers❤️”

Reid, who is from Verona, WI, is a rising senior at Madison Edgewood High School. At the club level, she competes for Badger Aquatics Club. At the recent Sectionals meet in Pleasant Prairie, Reid was a finalist in the 50 freestyle, finishing 26th overall (27.91).

When she arrives in Madison, Reid will provide Wisconsin with some much-needed depth in the sprint freestyle events. Last season, her best time in the 100 freestyle would have ranked 4th on the roster, giving her a potential spot on the 400 freestyle relay. The team only had 5 swimmers contest the event individually, making it one of their weakest events all season. Reid’s best time in the 50 freestyle would have also ranked 5th on Wisconsin’s roster last season. Reid also has a solid time in the 100 butterfly, which could lead her to develop into an Erika Brown-type swimmer if she places greater focus on that stroke.

Although she is still slightly off of what it took to final at the 2021 Big 10 Championships (23.16/50.11), Reid still has a year left to improve her times. At that meet, Wisconsin finished 5th out of 13 teams on the women’s side. Led by 2020 Olympian Phoebe Bacon, the badgers ranked up a total of 750 points. Wisconsin’s women went on to finish 19th overall at the 2021 NCAA Championships, with Bacon claiming the individual title in the women’s 200 backstroke.

Y’all ever gonna talk about that Hungarian kid?