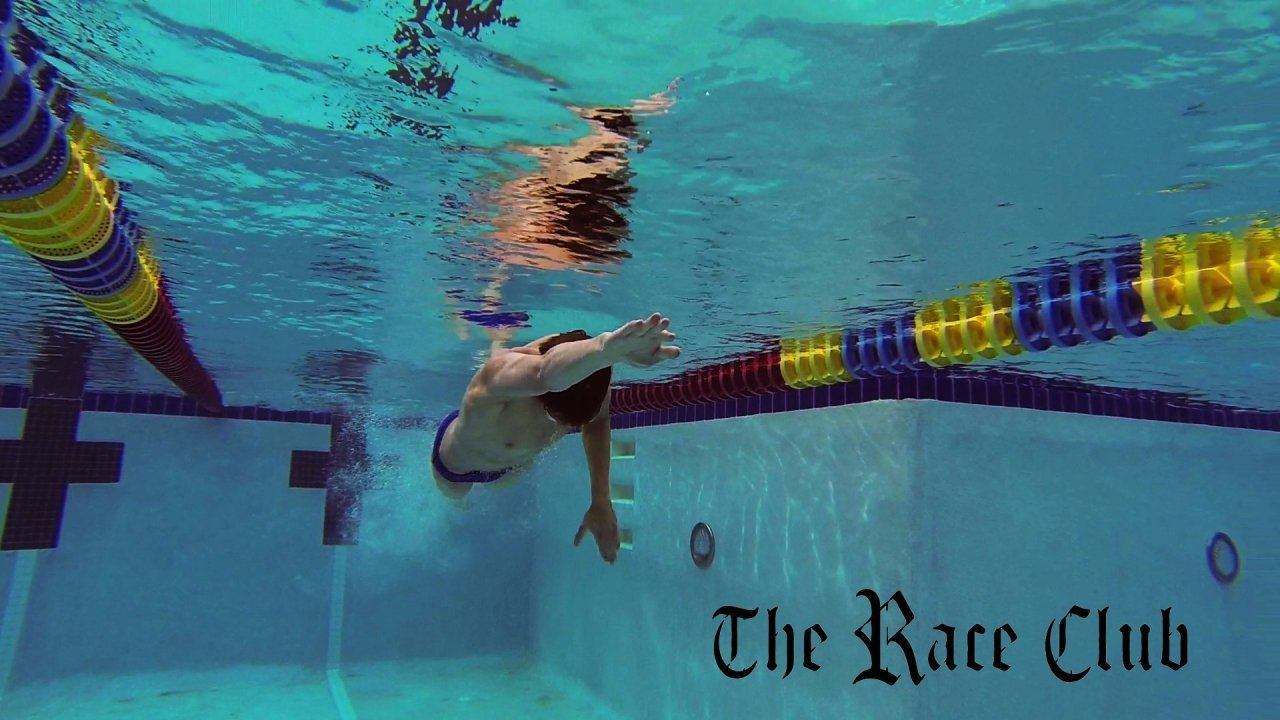 Gary Hall Sr.: "What happens between the time the feet leave the wall and the breakout is the most controversial and variable part of the freestyle flip turn. It is also when the most time is either gained or lost."

The Streamline – The Phelps Method

What happens between the time the feet leave the wall and the breakout is the most controversial and variable part of the freestyle flip turn. It is also when the most time is either gained or lost. The first controversy is over the best way to streamline. While not all coaches agree, I believe the technique that Michael Phelps uses is the fastest way possible. His elbows are squeezed together behind his head (not against his ears), such that two arms become nearly joined as one. His arms are pushed forward in the shoulder joint as far as possible, which tightens and lengthens the entire body. The chin is held very near the chest.

Since the body is leaving the wall (with a strong push) at a speed of around 8 miles an hour, the push had better be straight and the arms streamlined. Otherwise, with the frontal drag forces being proportional to the velocity squared, any non-streamlined shape will amplify the problem. The streamline must be maintained diligently all the way through the underwater pathway, including the breakout.

The second controversy has to do with the number of underwater dolphin kicks to be taken. In my opinion, that depends on the speed of the underwater dolphin kick versus the speed of the swimmer on the surface doing freestyle. The faster the kick relative to the swim, the more kicks underwater should be taken up to the number needed to reach the maximum allowable 15 meters (For Phelps that is seven kicks). Since most swimmers have kick speeds considerably slower than their swim speeds, they should be taking the minimum number of dolphin kicks to reach the breakout. Typically, on a turn, that is two dolphin kicks and on a start, three kicks. In an effort to be like Michael, too many coaches are advocating that their swimmers stay underwater too long. Build the kick first.

The technique of the dolphin kick is also frequently wrong. The kick needs to start from the hip rather than the knees to avoid increasing frontal drag from too much knee bend. The kick cycle time needs to be fast and the forces need to be applied in both directions with the feet, not just with the down kick. No whale kicks….just snapper kicks. Too often, swimmers apply way more effort to the down kick than to the up kick. A strong up kick will make the subsequent down kick more forceful. I often tell my swimmers not to let go of the water with their feet, so that they apply force in both directions.

When the swimmer leaves the wall, the feet should be planted with the toes pointing upward. The rate of rotational speed back to the stomach is important. The swimmer does not want to stay on his back long, nor does he want to flip over too quickly on to the stomach. The best rotational speed seems to be a steady, continuous rotation from back to side to stomach. So long as the body is straight, a slower speed of rotation will not slow the body speed down, nor will a faster rotational speed increase the body’s velocity. When it comes to rotation off the wall, a steady medium speed wins the race.

Pushing Off On Your Side

Some coaches advocate that the swimmer stay on his side for as much of the underwater segment as possible, with the final quarter turn to the stomach occurring just at the moment before breakout. The rationale for doing this is that the swimmer is faster on his side (less frontal drag) than on his stomach. While I have no objection to using this technique, I do not agree that the frontal drag of the human body is less on its side than it is on its stomach. I believe it is about the same, as the kicking speed is about the same in both positions.

Finally, the question of when to start the first dolphin kick is important. Since the body’s speed is so high when the toes leave the wall, bending the legs for the first kick too early will decelerate the body’s speed too much. Gliding too long, even with a great streamline, also creates a problem as the speed will have slowed so much by the time the first kick occurs that the propulsion must be greater, overcoming the loss of inertia, to get back up to speed. As a general rule, the larger the mass of the swimmer and the stronger the leg push off the wall, the longer the glide can be before initiating the first kick. For the most part, swimmers will error in gliding too long, rather than not long enough.

There are vast differences among swimmers’ dolphin kick speed, so more time is gained or lost from the freestyle flip turn on the underwater portion than during any other segment. If one wants to develop a great freestyle turn, it is essential to have a strong dolphin kick and apply it aggressively.

Use a great streamline, hold it throughout the underwater, initiate a strong dolphin kick at the right time and in both directions, use the right number of kicks and rotate evenly and steadily to your stomach. No, it is not easy to swim fast nor to turn fast.

Read more about Freestyle Flip Turn: The Push Off http://www.theraceclub.com/aqua-notes/freestyle-flip-turn/

Thanks for these articles Gary! If you/anyone else knows: what is the controversy about the best way to streamline?

kage – the Cal women use a hands-apart streamline. I assume that’s what the controversy is.

Thanks for responding. Huh, had never heard of that, wonder what the thought is behind that.

I thought the main controversy was about whether to have your arms behind your head or over your ears. (Some people think you have a smaller frontal profile in the latter position.) Both camps in that debate advocate keeping the hands together, right?

Whether to separate the hands is a different issue. Denis Pankratov was the first person I saw who used hand separation to increase his torso flexibility, so he could undulate more easily.

Yes..in either position the wrists/hands should overlap. When the arms are placed behind the head and the chin is on or near the chest, the head does not really protrude out more than the chest….which is why ( I think) most coaches would teach the other technique. The arms behind the head enable the swimmer to subluxate the shoulders forward more easily, which sculpts or excavates the abdomen and lengthens the entire body. It also tightens the skin.

With the greatest respect to Cal, hands apart will always create more frontal drag than overlapping the two hands/wrists. With hyperextension of the elbows, one can turn two arms into one unit…which is the best position.

What about the oxygen debt tolerance capacity differences between swimmers and it’s effects on the final 15 meters of a race?

Great point. In order to stay down for full 15 meters at the end of any tough race, one needs a great dolphin kick and a favorable VO2 Max. Some do not have the aerobic capacity to stay down…no matter what.

Some squeeze their ears – would that not be the controversy relative to phelps?