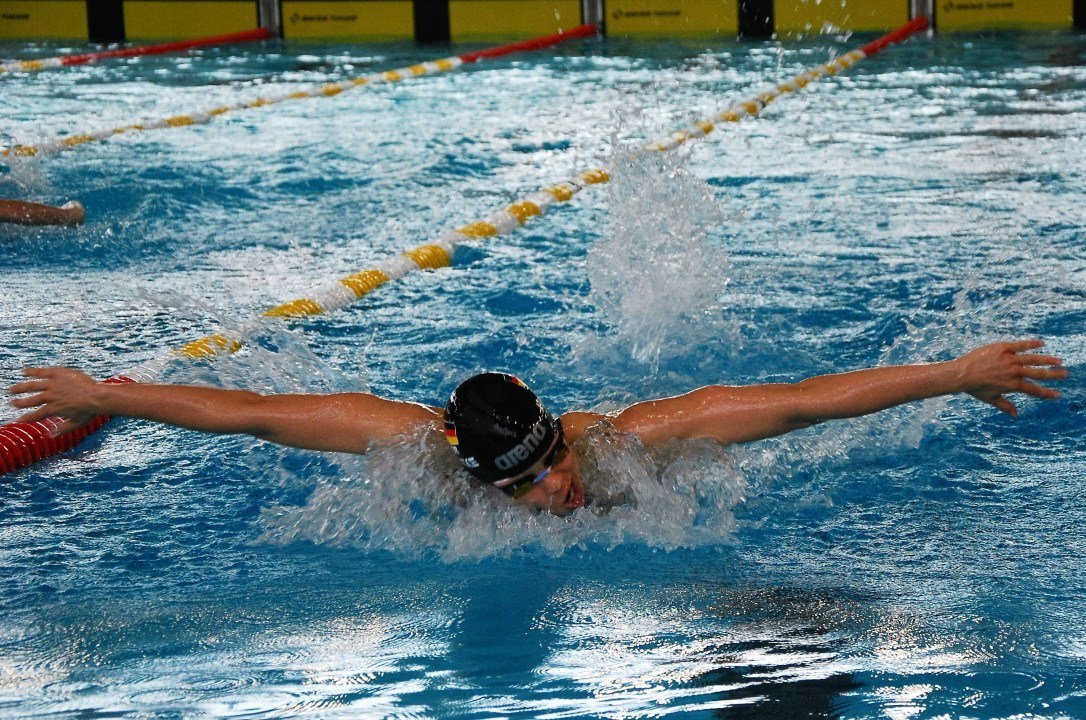 She is the first German woman who made it into the World Championships team and will join  Poul Zellmann (400m freestyle), Damian Wierling (50m freestyle),  Philip Heintz (200m IM) and  Florian Wellbrock (1500m freestyle).

Yesterday’s highlight was another #1 in the current FINA World ranking, powered by Philip Heintz in the 200m IM with a time of 1:55,76.

Anna Dietterle made it under the U23 norm in prelims but didn’t stay under the qualifiying time in the final, she finished third, Nina Kost is the new 2017 German champion in 54,99.

Freestyle talent Damian Wierling already has qualified for Budapest but he missed the nomination in the 100m freestyle during the prelims session but got a little revenge in the A final where he dipped under the U23 time in 48,68.

200m backstroke Olympic finalist Christian Diener, who is a real competition swimmer and normally is there when it counts, wasn’t able to hit the nomination standards.

And also for 2016 Olympian Jacob Heidtmann the time limits were too fast today.

The athletes must reach nomination standards in prelims and finals and only Olympic events are relevant for the World Championships.

German head coach Henning Lambertz said that he expects only a few participants because the German nomination standards are really tough. The German Swimming Federation only gives an extra chance to youngsters, born 1995 or later, with special qualifying times.

The qualifying standards are very close to the German record and no woman reached them during the prelims session. Vanessa Grimberg won the gold medal in a new personal best time of 1:07,80. She and Jessica Steiger are the fastest ladies in the breaststroke events at the moment.

German record holder  Jacob Heidtmann missed the qualifying time in prelims, he was clocked at 4:15,37. But he is the former and actual German Champion in 4:15,87.

Anna Dietterle made it under the U23 norm in prelims but didn’t stay under the qualifiying time in the final, she finished third, Nina Kost is the new 2017 German champion in 54,99.

Damian Wierling already has been qualified in the 50m freestyle but he also wanted to show his 100m freestyle power, he missed the standard in prelims but came back in the in final, clocked at 48,68. Marius Kusch, a student-athlete at the Queens University of Charlotte, NC, took the silver medal in 49,25 and has a hot iron in the fire to participate in the 4 x 100m freestyle relay.

Franziska Hentke swam to the top of the world ranking in 2:06,18. Youngster Julia Mrozinski showed her real potential, she finished second in 2:10,99 after a unsatisfying result in prelims.

Martina van Berkel, who trains in Germany but starts for Switzerland internationally, grabbed silver in 2:09,57.

Christian Diener was full of joy after his participation in the 2016 Olympic final in the 200m backstroke and normally he can handle stressful situations very well but today however he wasn’t fast enough for a spot on German the World Championships team.

Last year at the German National Championships,  Alexandra Wenk established a new German record in the 200m IM in 2:11,33. She doesn’t participate at this year’s championships because of a training deficit. At the moment, there isn’t a German woman who is able to swim times around 2:11 or 2:12.

Maxine Wolters took the win in 2:13,57 ahead of another US Student-athlete, Franziska Weidner who studies at the University of Hawaii, Manoa.

German record  26,83, Hendrik Feldwehr
(not possible to qualify for Budapest)

The 2017 German Champion in the 100m breaststroke, Christian vom Lehn, also wins the sprint distance in 27,77.

This has been brought up before, but I think about how great Mary T. Meager was in the 200 fly. There is no other athlete whose times in ANY event that would be world ranked #1 from 36 years ago. THIRTY-SIX YEARS AGO!!!! Amazing. T’s 2:05.9 is still incredibly competitive and would qualify for finals at both the Olympics and Worlds. All of this in textile, no goggles and barely any under waters. Incredible.

Mind-blowing talent. Sadly, due to recent revelations in sport, it does make you wonder. Sign of the times eh.