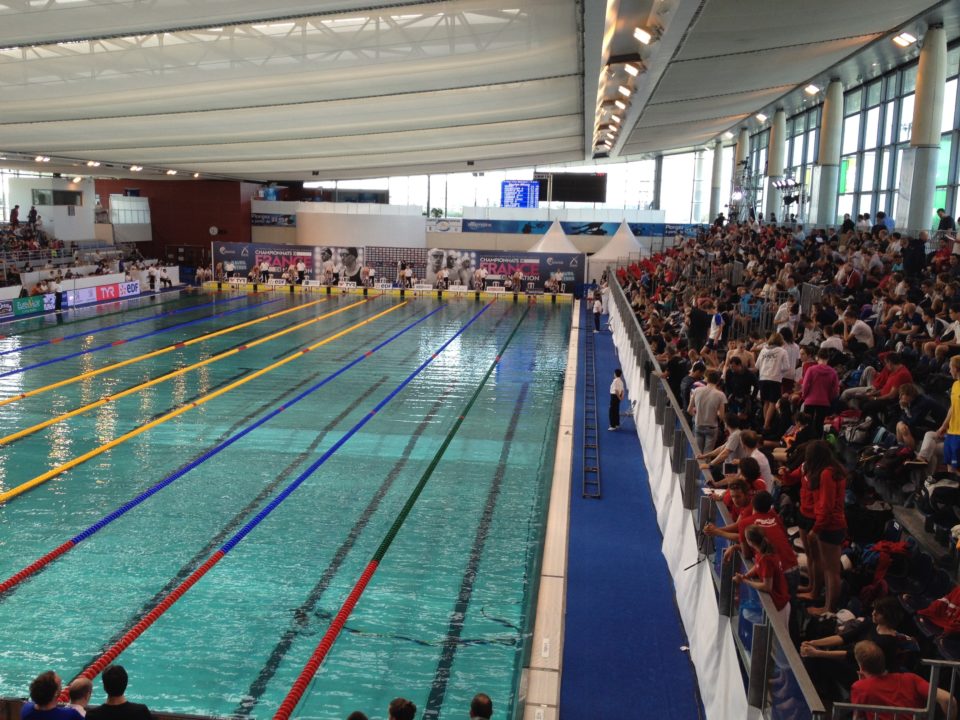 The French National Long Course Championship in Chartres has concluded its fourth day by crowning new national champions in women's 50 breast, 200 IM, and 100 back and in men's 1500, 200 breast and 200 fly. Current photo via S. Bole

Women’s 50 breast: Following morning prelims which saw Adeline Williams of Toulouse (32.04) and Coralie Dobral (32.17) of Montauban both under the qualifying standard for Euros, the final heat of the women’s 50 breast was a little slower. Dobral got the win in 32.14 but she was the only one under the 32.20 cutoff. Second place went to Claire Polit of Montpellier (32.25); third was Chloé Cazier of Beauvaisis (32.27).

Women’s 200 IM: Evelyn Verraszto continued the Hungarian sweep of men’s and women’s individual medley events, defending her 2013 title with 2:11.86. Charlotte Bonnet of Nice took silver in 2:13.33, while Lara Grangeon of Calédoniens rounded out the podium with 2:15.25. Bonnet and Grangeon were the only French women to make the Berlin cut of 2:16.09.

Men’s 200 breast: Avenging their second- and third-place finishes in the 100 breast, Antibes teammates Thomas Dahlia and Quentin Coton each dropped a second from their previous best times to finish 1-2, respectively, in the 200. Dahlia touched in 2:11.43; Coton went 2:11.60. The pair were the only two qualifiers for Berlin (2:13.76 cutoff). Third place went to William Debourges, also of Antibes, who finished with 2:14.23.

Men’s 200 fly: The French don’t seem to have any trouble qualifying butterfliers for the European Championships. The top five finishers in the 200 all came in under the 2:00.03 cutoff. Defending champion Jordan Coelho of Etampes won a much closer final than in 2013: his 1:56.95 was only 8/10 ahead of runner-up Jérémy Stravius (Amiens) 1:57.73, versus the four-second lead that characterized last year’s race. Thomas Vilaceca (Montauban) and Paul Lemaire (Toulouse) came in third and fourth, respectively, with personal best times of 1:58.87 and 1:58.88. Stravius also logged a best time.

Women’s 200 free: The top eight seeds all came in with seed times under the Berlin cut of 2:00.58; only two of them went under 2:00 in semi-finals: Coralie Balmy (Mulhouse) with 1:58.82 and Camille Muffat (Nice) with 1:59.52. This event is probably the French women’s strongest on the international scene – it is the one in which they have the most depth, as evidenced by their bronze medals in the 4×200 relay at both the 2012 Olympics and 2013 World Championships.

Women’s 200 fly: The top three semi-finalists all swam under the Berlin qualifying time of 2:13.69: Lara Grangeon (Calédoniens) went 2:12.61 and both Barbora Zavadova (Czech Republic) and Marie Wattel (Nice) touched in 2:13.37. It should be a tight race tomorrow.

I am not worried at all for Yannick. I think he will still smash it this summer.

The only good thing is that now he will not swim the 100 free in individual next summer.
All for the 200 free/400 free double.

I don’t really know what their plans are, but If Bowman and Agnel want to experiment with 100-200-400, they should have started and done it this year, which is a non-worlds and non-olympics year.

Something must have gone horribly wrong… I definitely agree with you.. Kazan wont be good place for experiments, would rather be a test event for Rio IMO

I post the interview of Yannick Agnel.
It’s in French but with the modern translation tools you can understand most of his quotes. 🙂
He said he had no energy during the race.
http://www.lequipe.fr/Natation/Actualites/Agnel-panne-d-energie/456784

Bobo, no cuisine updates…you are in Chartres !

You are in Chartres!
I wish you a good end of trip.
Weather is good.

Nothing to say about the state of breaststroke, IM and backstroke on the women’s side. 😥

Great 200 breast battle between Dahlia and Coton. Decent times at the end.
The breaststroke hopefuls Dencausse and Lesparre have a great future ahead of them.

Ok. Exciting duels to come for today.
Manaudou vs Agnel in the men’s 100 free final
Muffat vs Bonnet in the women’s 200 free final