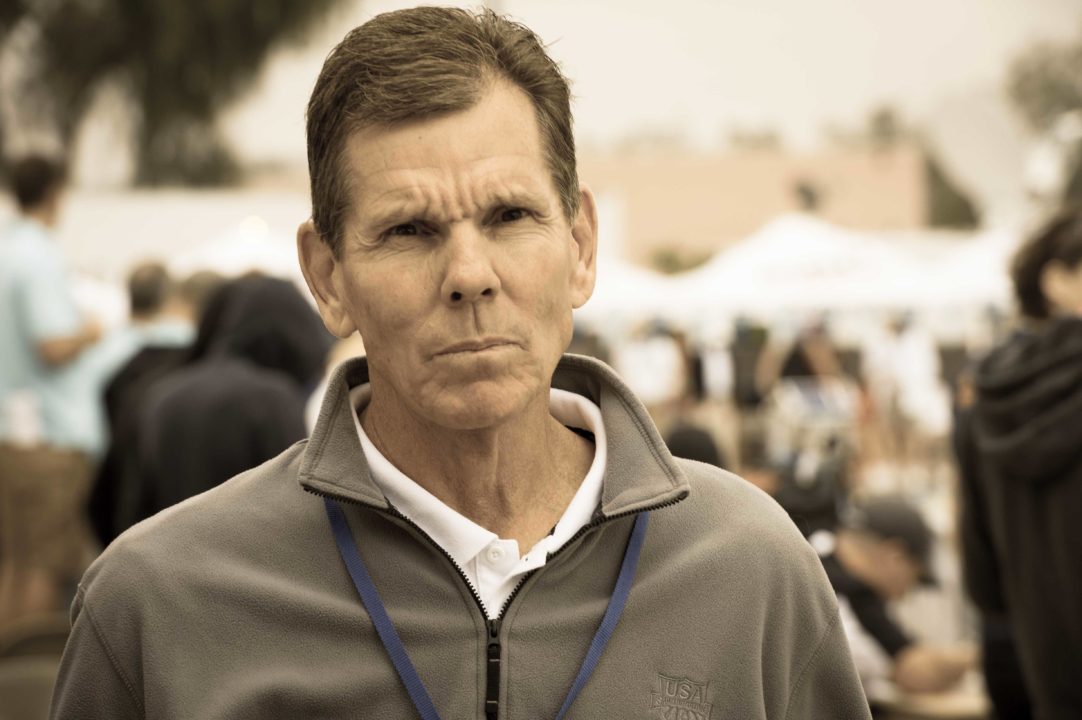 While the IOC has said that it plans to go forward with the Olympics beginning on July 24th as planned, Busch believes they should take place in 2021. Archive photo via Mike Lewis/Ola Vista Photography

Former USA Swimming National Team Director Frank Busch added his voice to the conversation about the global COVID-19 pandemic caused by the coronavirus and the 2020 Tokyo Olympic & Paralympic Games.

“In my very humble option, I really do feel the Olympics should be canceled…  And I think the USOC should be the leader on that,” says Busch in an article by the Tucson.com.

While the IOC has said that it plans to go forward with the Olympics beginning on July 24th as planned, Busch believes they should take place in 2021 instead. With the infrastructure already in place and so many swimmers’ and teams’ training interrupted by pool closures, Busch believes the USOC and Olympic broadcaster NBC should mount a campaign to postpone the 2020 Summer Games.

“We could go to Tokyo next year,” continued Busch, “Just postpone it a year; all the facilities will be there. Everybody could take a couple of months off now to allow this country and the world to get past this tremendous health challenge. It would just make so much sense if the USOC would take leadership and then, obviously, NBC.”

Many collegiate and professional swimmers are now training from home, though some are still trying to find solutions nearer their university training centers.

“I spoke to a coach who has several Olympic medalists and they are now using a three-lane pool at a YMCA in Florida,” says Busch. “I have no idea how you can properly prepare for the Olympics using 25-meter community pools.”

“Why not just take the pressure off our athletes and allow people to get the hell away from everything for a couple of months?” says Busch. “It doesn’t make sense to worry about whether you will qualify for the Olympics or not when there are far more important issues in the life of every person.”

Arizona State Head Coach Bob Bowman also stated that he believes postponing the Olympics one year and making them officially “Tokyo 2021” is, given the many interruptions athletes are facing with training, the best thing to do.

“If they did postpone it, it would take a lot of pressure off this situation right now,” said Bowman in an article by the Associated Press. “People are scrambling. Most people are not training. If we had a little more time to get ready, that would probably be a good thing.”

If the Tokyo Games were pushed to next summer, then FINA would have to skip the 2021 FINA World Aquatics Championships, which are set for Fukuoka on the Japanese island of Kyushu, south of the main island, Honshu, where Tokyo is located.

Many other countries have shut down pools altogether. At this point, it’s not a level playing field, let alone putting people’s lives in danger. Trump stated they expect the peak of the pandemic to be July, August or later in the US. The IOC needs to do the right thing and postpone.

I giggle to myself to read how he doesn’t know how people can train for the Olympics in 25-meter pools… welcome to the Pacific Northwest where most of our Olympians prepare in 25-YARD pools!

Exactly. I believe that Jenny Thompson did it before heading to college

wow, wtg Florida … that state is the reason it’s going to spread all over. well done sunshine state.

You mean the state that everyone came down to from other states, bringing it in and passing it around, before leaving?

“I have no idea how you can properly prepare for the Olympics using 25-meter community pools.”

Oh I don’t know. That’s more than a lot of folks have right now.

Ha! Exactly! Our son who planned on training hard for trials after NC’s hasn’t seen a pool in a week!

If he’s in Austin, tell him to go to Austin Swim Club.

Wish you could “postpone” recruiting. Many people like myself are forced to train at such pools

They did postpone it…
You’re not doing yourself favors exposing yourself to this. No idea how bad this could effect you, and you’re talking about your lungs.

Stay home, ride your bike in places away from people to stay in shape if you want.

The Olympians take breaks and get back in shape. (Wish someone told me that in high school)

Nobody is forcing you to do anything.

Even if a team is operating why are these parents allowing their kids to go?

@XMAN, we all know the answer to that one 😉

Sometimes athletes genuinely want to go to train. Some of
The biggest fights I ever got into with my parents during my high school years were about whether or not I was going to go to practice

Well my four year old wants to go the park today and started crying about it.

What club are you with that is still training? It was my understanding that most have stopped.

I commend Busch & Bowman for speaking up at this point. As a practical matter the only sensible way to balance the equities is for the IOC to formally move the Games out one calendar year.

Think àbout it.
You would have sick athletes returning.
, Both Frank & Bowman are right wait next year.