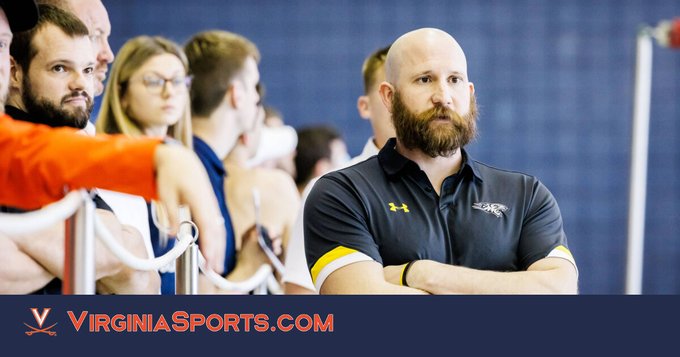 Shrum, a 2008 UVA grad, will return to his alma mater after spending the last six seasons as the head swimming and diving coach at Towson University. Current photo via @UVASwimDive/Twitter

Shrum, a 2008 UVA grad, will return to his alma mater after spending the last six seasons as the head swimming and diving coach at Towson University. Prior to his time with Towson, Shrum also served as a volunteer assistant with Virginia.

Shrum will take over the assistant coaching position that has been held by Wes Foltz for the last six seasons at UVA. The reason for Foltz’s departure is unknown.

“The synergy of our staff is important to me, and the staff has been integral in our success the last five seasons,” Desorbo said.

“Better yet, Jake is a great person and I’m looking forward to sharing the pool deck as well as many laughs. Beyond that, Jake is a UVA alum, he has already battled for the Hoos and I’m happy to welcome him home!”

“The synergy of our staff is important, and the staff has been integral in our success the last five seasons. Jake will fit right in and help continue our drive for excellence.” – Todd DeSorbohttps://t.co/Jqd1qvSoYq

Over the course of his six seasons with the Tigers, having joined them in May of 2015, Shrum helped lead both the men’s and women’s teams to new heights, including the men claiming their first-ever CAA Championship in 2020-21.

In 2021-22, Shrum coached Brian Benzing to NCAA honorable mention All-America honors with a 13th-place finish in the 100 breaststroke at the NCAA Championships.

On the women’s side, Shrum led Towson to a seventh-consecutive third-place finish at the CAA Championships in 2022, while the men’s team also placed third this past season.

During his time at UVA as a volunteer assistant, the Cavalier women won a pair of ACC titles and improved from an 11th-place finish at NCAAs in his first year up to a fifth-place finish in 2015.

Shrum earned a bachelor’s degree in computer science from Virginia in 2008. As a student-athlete, he was a four-time varsity letter winner and was a member of three ACC Championship teams.

I wonder what the pay difference between head coach of Towson vs assistant coach at UVA?

UVA family wishes Wes Foltz nothing but the best.

why did he leave towson?

when your alma mater calls, you answer. Puts him in a great position to get the head coaching job there or at another power five program eventually too.

Did you just answer yourself?

didn’t notice that the guy was also named swimmer, guess i have to get more creative with my handles

During Jake’s first year at Towson, our program fell apart. Our head coach of 15+ years was forced to resign amidst a major scandal, and the culture was as toxic as they come. Suddenly, Jake was thrust into a head coaching roll he was wholly unqualified for.

Jake was the steady hand that kept our program together through that time, and for that, I will always be grateful. Despite the fact that we didn’t have the resources of some other teams, I feel we’ve consistently punched above our weight class and built a culture to be proud of (I’m convinced we have one of the best record boards in MidMajor).

Congrats on the homecoming, Jake. UVA got a good… Read more »

Doc Shrum must be jumping for joy in heaven! Jake is a phenomenal hire!

What a hire! Congrats Jake!