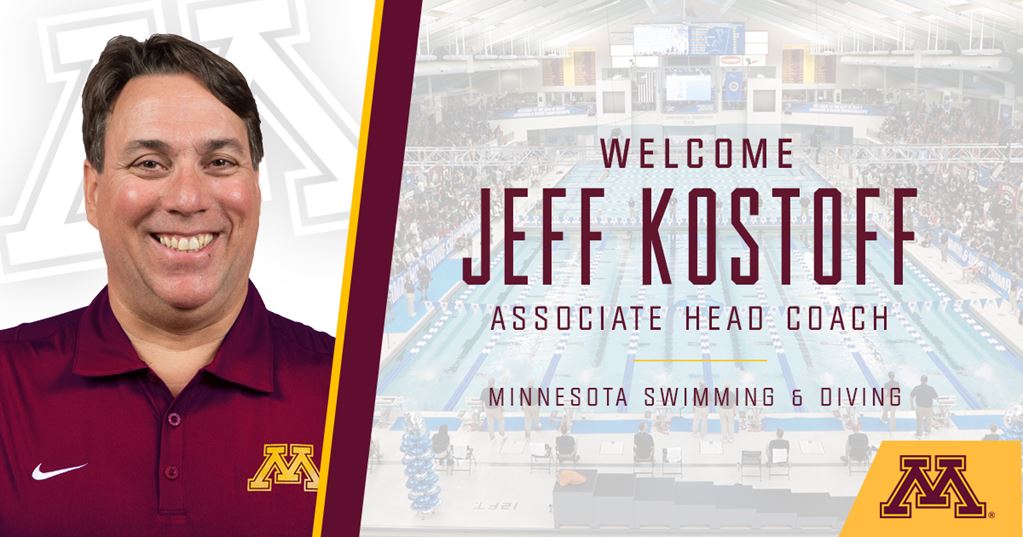 After three years at Indiana and three at his alma mater Stanford, Kostoff is headed to Minneapolis to join the Gopher staff. Current photo via Minnesota Athletics

Kostoff will officially assume his new position on Aug. 30, according to the press release.

“We are very fortunate to add Jeff to our staff. Jeff is an experienced and exceptional coach, and by all accounts an even better person,” Kremer said. “We are looking forward to having him on deck and getting started on this new season.”

Kostoff, known primarily for his work with distance swimmers, spent the last three seasons as Ted Knapp‘s assistant in Palo Alto. Knapp retired after 35 years with the program following the 2018-2019 season, and new head coach Dan Schemmel brought in Wisconsin’s Neil Caskey as his assistant. Under Kostoff’s watch, the Cardinal won the 2017 Pac-12 title, and Abrahm DeVine became the program’s first national champion since 2014.

Prior to Stanford, Kostoff was an assistant under Ray Looze at Indiana University from 2013-2016, where he worked with U.S. National Team-ers Zane Grothe and Lindsay Vrooman. Kostoff also spent four years as an assistant at the University of Maryland, and nine years in the club coaching scene from 1991-1999.

In his own swimming career, Kostoff was a five-time NCAA champion for Stanford (class of 1987) and two-time Olympian; he set 12 American records from 1982-86.

Jeff was the most personable and swimmer oriented coach I had in my collegiate career- Minnesota is very lucky and will be very successful with him there!

Great hire by Minnesota. Jeff brings credibility to their program. I am not sure how he will deal with the cold weather.

Bloomington isn’t too warm either, he’ll be fine.

He will get through the cold winters just fine; it just takes some getting used to. He will not turn into an iceberg! He seems like a great addition to University of Minnesota Swimming

Have you been in Minneapolis in the winter? Pretty sure they have ice-berg parking on all of the streets.

Have you been to the Bay Area in the summer? I think it’s where the icebergs go to ride out the warm months. My coldest winter was a summer in San Francisco.

I went to U of MN. The roads are well maintained but it is true that the snow banks are quite high and very gritty looking. I will take Minnesota over the Bay Area any time. More affordable than most places.

He coached me some when he was at IU. He has a great laid-back-coach demeanor that is still motivating. I hope things go well for him!

Ran the mile in 401 from what I remember.

His high school record lasted for years and years

Yes, his public school record in the 500 only fell six months ago: https://swimswam.com/jake-magahey-breaks-oldest-national-hs-yards-record-in-500-free/ And no high school swimmer went faster in the 500 until Jack Conger did in 2013.

Several high school age swimmers swam faster than that record before Jake Magahey…just not at a high school meet. High school records are pretty deceiving for that reason.

He’s got a great smile, obviously happy about the move. Congratulations Jeff!

He’ll be able to afford a house.

Actually Minnesota is a fairly decent place. I think the cost of living decrease and promotion will more than make up for the cold winters.