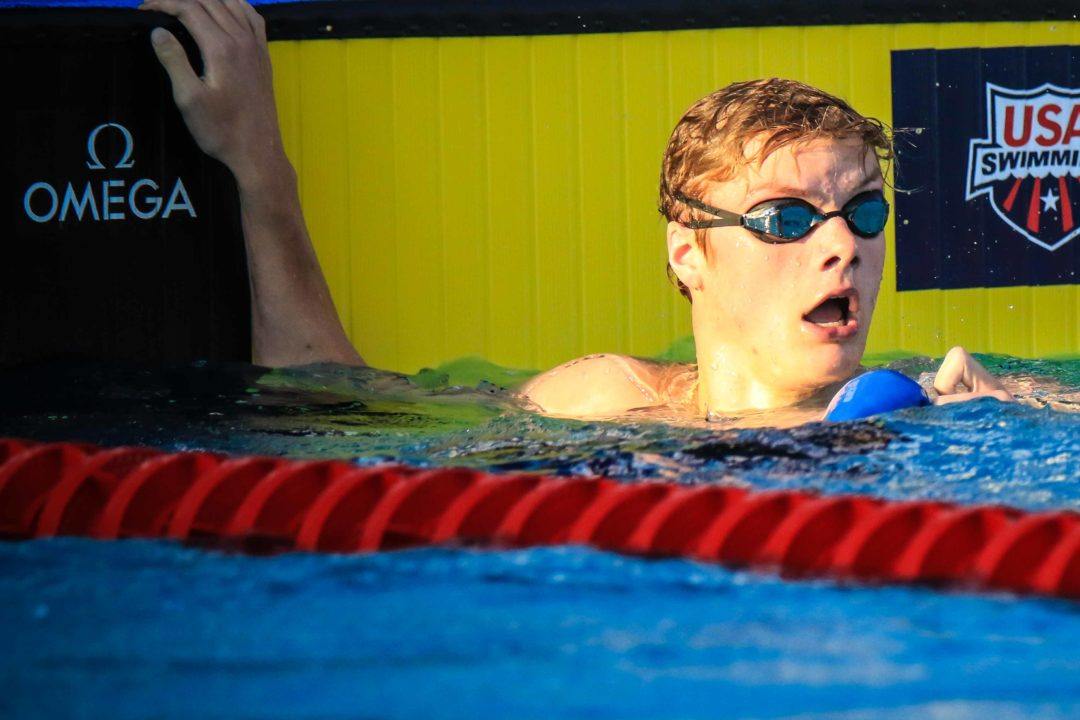 Magahey (above) took out Jeff Kostoff's public school record in the 500 free that stood for 36 years. Archive photo via Jack Spitser/Spitser Photography

Mill Creek High School junior Jake Magahey broke the National Public High School Record in the boys’ 500 yard free on Saturday at the Georgia 6A-7A State Championship meet. He won the race in 4:15.63, which breaks the oldest boys’ National High School Record on the books: the 4:16.39 done by Jeff Kostoff of Upland High School in Upland, California on May 14th, 1983. Kostoff is currently an assistant coach for the men’s team at Stanford.

The overall high school record remains the 4:12.87 swum by Grant Shoults of Santa Margarita Catholic in California on May 14, 2016. This swim isn’t actually Magahey’s best: at the Speedo Winter Junior East Championships in December he swam 4:14.61.

The new oldest boys’ record on the books (pending ratification of this swim and Brendan Burns’ 200 SCM free from earlier this year) is Kyle Bubolz’s public school short course meters record in the 50 free of 22.61. Bubolz set that time in 2004. The oldest remaining yards records, the most common course in high school swimming, are David Nolan’s trio of public school records from 2011. He broke the 200 IM (1:41.39), 100 free (42.34), and 100 back (45.49) records on the same day at the 2011 Pennsylvania State Championship meet.

The oldest record for either gender and either course (and only remaining pre-2000 record) is Tracy Caulkins’ 100 short course meters breaststroke. She swam 1:07.47 in January of 1981 while racing for Harpeth Hall in Tennessee, which is the independent and overall high school records.

Video of the finish of the race, courtesy: Scot Pittenger

Amazing, fantastic swim!! 4:15 smokin’ fast. And Incredible record to break. I remember swimming “against” amazing Kostoff in the early 80’s (I was waaaaaaaaaay behind him!). But didn’t Jack Conger (4:13) and Grant Shoults break H.S. record in consecutive years a few years ago..??

Anyone know if Nolan is still swimming? I thought for sure he was going to the Olympics after he clocked in 1:41 in HS.

He retired iirc. He was solid in the 200IM LCM but unfortunate for him he had to deal with Phelps and Lochte. I think Nolan is maybe the best swimmer I can think of to never make a world’s or Olympic team. I think he retired with some untapped potential in LCM.

the back of my head is in this video 😎

Carson Foster isn’t swimming the IM this season, he swam 200 free and 100 back this weekend at HS Sectionals. Jake Foster is swimming the 200 IM, but 1:42 is a stretch. 400 IM is his thing… Rumor is the Carson is trying to graduate early and get to Texas to train for trials with his brother. i.e. This could be it for both Fosters in HS swimming.

Fosters are out after this year. FACT!

FYI, future IU Hoosier Brendan Burns broke the 200 SCM NISCA record on the same day as Destin and was faster. SwimSwam reported it. It was kind of funny that the oldest NISCA SCM record was broken twice in one day by 2 kids in the same LSC.

Just weird they keep track of scm records in HS when only 10% (at most) of high schools swim scm! To me they really aren’t “National” records. How many states have their Hs state champs in scm?

That’s why no one really “counts” them… They are done in small meets right after or right before bigger meets like Jrs, Srs, or state meets if there is a chance some records could be broken. To be fair, those records are VERY fast… but its like having the SCM record for NCAAs as well.

Remember that year…. 2004 (I think) where they did NCAAs in SCM?… and almost every record was broken

Why are there separate records books for public and private high schools? NCAA records are the same for all type of colleges as far as I know.

Private schools can bring in talent from all over a city, state, or even country. Public schools are limited to just kids in that district. Doesn’t really affect individual times, but having separate records is great if only for relays.

That is definitely a mistake