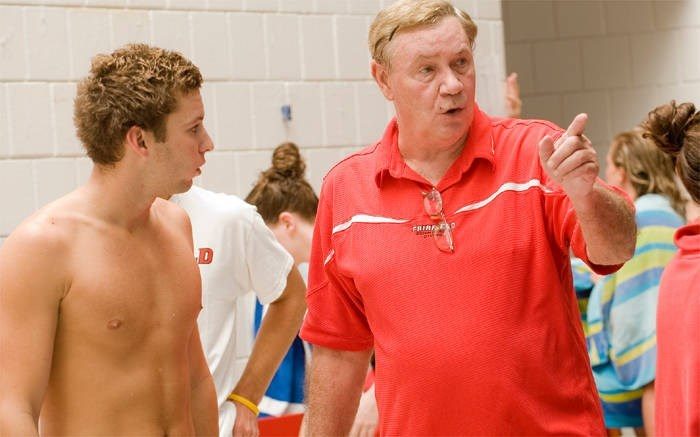 Farley spent 9 years as the head coach of the Princeton men's swim team, and was the first-ever coach of the women's team. Archive photo via Fairfield Athletics

Former Princeton swim coach Bill Farley died in late August at his home in Sacramento, California. He was 73 years old.

As an athlete, Farley finished 4th in the 1500 free at the 1964 Olympic Games in Tokyo. After finishing his college career at Michigan, where he won 10 NCAA All-America awards, he went to serve in several head coaching positions, including his first coaching position as the head coach of the Princeton men’s swim team in 1971. In 9 years with the program, he amassed a 275-69 dual meet record, coached 8 NCAA finalists, 1 NCAA champion and 1 Pan American Games champion.

He also launched the Princeton women’s team and served as its first head coach.

In 1979, he returned to spend 2 years as the head coach at his alma mater, Michigan, where he had a 23-5 record, put 8 swimmers on the All-America team, and let the squad to two second-place finishes in the Big Ten.

After time spent coaching around the world and working outside of the sport, he returned to the NCAA in 2002 as the head coach of Fairfield University in Fairfield, Connecticut. In 12 seasons there, he led the men’s and women’s teams to 107 victories, making him the winningest coach in program history. His teams broke 76 school records and won 10 individual event titles at the MAAC Championships, including the first-ever women’s championship in 2006. He retired from Fairfield after the 2013-2014 season.

A prayer service has been organized on October 2nd in Menlo Park, California, followed by a social gathering in Farley’s honor at The Dutch Goose afterward.

Full obituary below, authored by a small committee led by Mike McCaffery, Princeton class of 1975.

It is with sadness and fond memories that we write to inform you all that Bill Farley passed away in late August at his home in Sacramento.  Bill was 73. We will always remember him as a great coach, mentor and friend.

William Winfield “Bill” Farley was born in Fort Devon, Massachusetts on November 10, 1944.  He was active in all sports until at the age of 15, he dedicated himself to swimming for the legendary USC Coach Peter Daland, who was then coaching the Los Angeles Athletic Club.  LAAC produced a long list of world class swimmers, including legendary distance swimmers Roy Saari and Murray Rose.  Charlie Campbell ‘73 remembers being a 10 year-old age grouper in the outside lane in the LAAC pool watching Farley and his cohorts with awe.

After graduating from St. Francis High School in La Canada, California, Bill went on to become one of the most decorated and accomplished swimmers in University of Michigan history.  Bill won multiple Big Ten Conference Championships in the 200, 500 and 1650 yard freestyle events. He was named All-American in 1964, 1965 and 1966. It is rumored that he set the American Record in the 1000 yard freestyle in a practice time trial at Michigan, after a full lunch of spaghetti and meatballs. He graduated from Michigan in 1966.

After his swimming career at Michigan, Bill retired from competition with ambitions to be a college swim coach.  He received his Master of Science in Education from Eastern Michigan University in 1969.  While still in Ann Arbor, Bill coached a young Peter Daly ’76 at Ann Arbor Swim Club.

Bill had a long and successful career as a college coach, including as Head Coach of his beloved Michigan Wolverines, and over 10 years as Head Coach of Women’s and Men’s teams at Fairfield University in Connecticut.  At Fairfield, Bill completely turned around a losing program, becoming the winningest coach in Fairfield swimming history.  He also produced 150 All-Academic athletes while at Fairfield.

But Bill’s coaching record at Princeton is what we all remember. He arrived at Princeton in 1969 at the age of 24 to coach the freshmen men.  From 1970 to 1979, Bill coached the Men’s Varsity to six straight Eastern Seaboard Championships, and five Ivy League Titles.  During this period, he amassed a dual meet record of 275 wins and 79 losses, a .776 winning record.  Bill coached multiple All Americans, eight NCAA finalists, and an NCAA Champion, Charlie Campbell ‘73, who also won Gold at The Pan American Games in 1971.  Charlie’s relationship with Bill, started in that LAAC tank, came full circle at Princeton.  Bill taught Charlie how to properly shave his face.  Bill also taught Jim Clarke ’77 how to be a well-behaved and conversant roommate on swimming road trips.  Jim said recently, “Under Bill’s leadership we became a team.  As a team we worked incredibly hard.  We learned to care about each other, support one another, and depend on each other.” Mal Howard ’75 said, “He was by far the best coach I ever had.  He had a way of getting the very best out of every one of us.  It is hard to believe he was only 26 years old when I arrived at Princeton in 1971.”

Bill’s record as Head Coach of the Women’s Varsity was even more impressive, since he essentially started that program from scratch.  From 1971 to 1975, he led the Women to two Eastern Championships and a 3rd place finish in the 1973 National Championships.

He produced two National Champions, nine All Americans, and a National Championship American record setting freestyle relay.  In a “pre-Title IX” era, Bill created an extremely high-quality program and an outstanding competitive opportunity for Princeton Women, an exception to college programs of the day.  Bill welcomed women of all abilities to practice with the men’s team in the shared and constrained space of the old Dillion Pool. Carol Brown ’75 said, “Bill encouraged me to try out for the 1976 Montreal Olympic Rowing Team.  His support, and my swimming-based fitness were instrumental in my bronze medal result.”

Several members of the Women’s and Men’s teams who benefitted from his coaching and friendship tell stories about Bill.  These stories are equal parts quirky and touching.  Bill was caring, compassionate and weird, all in one package.  Stories about Bill can only be told by the people who lived them.  We hope to have an opportunity to tell and hear those stories at some point in the not too distant future.

The Friends of Princeton Swimming is discussing an appropriate tribute to Bill.  There will be more news on that in the near future.

A huge loss for the swimming community. A consummate professional and a better man. Condolences to Farley family.

Bill Farley was a tremendous coach. Loved being around him. He had a gift for instilling belief. He made it fun to work hard. Outstanding at reinforcement. Swam for him at Ann Arbor Swim Club (the pre-Club Wolverine), just 10 swimmers on the entire team, three lane pool, no late ropes. Then two summers later, in a private training group of four, with AMs in a 200m x 50m pond. PMs outdoors scy. I’m grateful to have had Bill Farley as an influence in my teen years. My successful days coaching are those I carry forward something of what he gave me.

Had the pleasure of meeting Bill during his Princeton days when I would visit to cheer on the late Lloyd P. Wallace and then again as we worked together at Fairfield University. The team grew under his leadership and excellence.