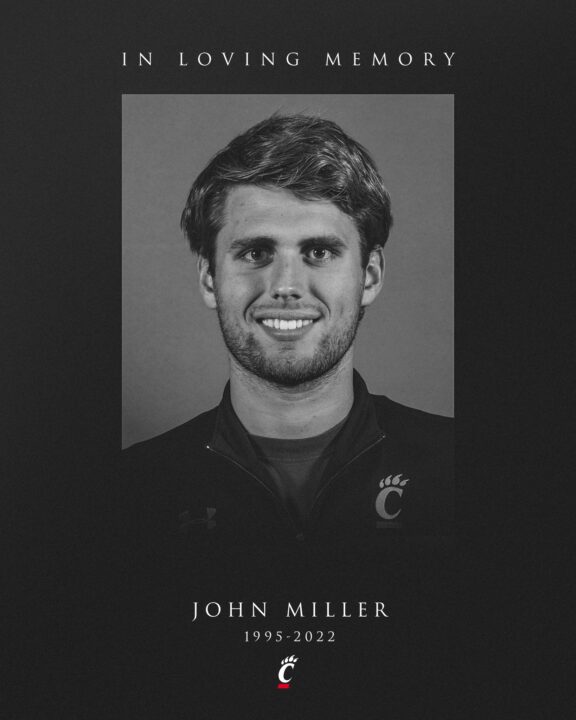 26-year old John Miller, a former swimmer at the University of Cincinnati, was killed two weeks ago in a hit-and-run collision. Current photo via Cincinnati Athletics

A former University of Cincinnati swimmer was killed two weeks ago in a hit-and-run car crash. 26-year old John Miller died at the scene after being hit by a vehicle.

Police say they were called to Cincinnati’s Walnut Hills neighborhood around 3:28 a.m. on July 17 after a Kia Spectra hit a pedestrian. The driver, 49-year old Donte Bennie, fled the scene of the crash, but was located by police shortly thereafter. Bennie was not injured in the crash.

Police are investigating the incident and have not yet determined if excessive speed or impairment were involved.

A GoFundMe has been launched to help with funeral costs. Organizers also hope to raise enough to establish a memorial bench at Otto Armleder Dog Park in Cincinnati, Ohio, where friends and family say he went daily with his dog, Murphy.

“John was a son, brother, dog dad to Murphy, teammate, and true friend to many,” DiPietro wrote. “John had a genuine heart of gold, dedication matched by few, and was loved by all who had the pleasure of calling him their family and friend. He will be greatly missed.

“It is in times of sadness and loss when we must come together to help one another and support those we care for, as John would have done for us.”

Miller was a native of Baton Rouge, Louisiana, where he set a club record in the 1650 free.

After graduating from Cincinnati with a degree in chemical engineering, Miller took up engineering jobs with multiple companies. Earlier this year, he took on a new role as an automation engineer with Cincinnati-based Jedson Engineering.

While in college, Miller volunteered with the Jose Cerda Navarro Aquatic Foundation.

So sad to hear about this. John was my host on my visit to Cincinnati in 2015. Although, due to a number of reasons I didn’t end up at UC, he was a HUGE part of the reason I wanted to commit there in the first place. I felt I had a lot in common with him, his work ethic and his positive attitude, and I wanted so badly to be his teammate. Additionally, his pride for where he went to school was so contagious to be around too. I remember walking on my tour of the campus with him, and he and his teammate would jokingly tease the people who wore shirts from other colleges, that to me was… Read more »

John was a terrific person. I remember him as a great person, hard worker and tremendous teammate on Crawfish Aquatics. His death is a tremendous tragedy for all who knew him. Prayers for his immediate family and all of his many close friends.

So awful to be mowed down when minding your own business. My condolences.
Life is short and every day is a gift.

Absolute tragedy. Thoughts and prayers to his family and teammates