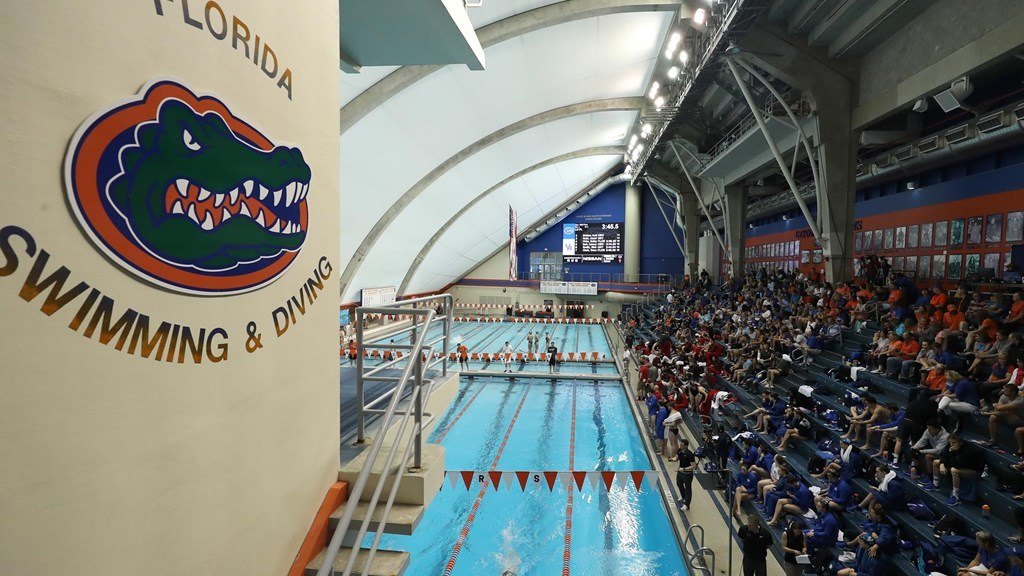 Five women and seven men will be recognized for their contributions to the Florida swimming and diving program over their four years of competition as the Gators host Tennessee at the Stephen C. O’Connell Center Natatorium. Current photo via Florida Athletics, Tim Casey

GAINESVILLE, Fla. – Saturday is a special day in which we honor our senior class. Five women and seven men will be recognized for their contributions to the program over their four years of competition. The No. 6/8 Florida swimming & diving team hosts No. 9/13 ranked Tennessee at the Stephen C. O’Connell Center Natatorium.

Last time out, the Florida men’s and women’s swimming & diving teams traveled to Auburn, Alabama for a matchup with the nationally ranked Tigers. The men defeated the No. 25 Tigers, 182-118, but the women fell to No. 7 Auburn, 187-113.

The meet starts on Friday with the women’s 1-meter and the men’s 3-meter. On Saturday, the meet starts with a celebration for our senior swimmers and divers beginning at 9:30 a.m. Events are scheduled for a 10 a.m. start on Saturday.

ENTRANCE:  Spectator entrance will be Gate 2.  Please be aware that there are metal detectors at this entrance.

Them Gators will be cryin after this one.
The Big Mean Laddie Vols Machine will tsunami those poor little she-gators.
Now the MEN’s meet should be pretty close but with the South African mid-year WhodunitHoulie and DeCoursey the heir apparent to Dressel at this years SEC MEET, and the ZigZeng led AMAZING Mans Vols diving FORCE aint no Florida tradition gonna help the home team. I say show no mercy TN!!! Florida gettin ready for the worst home whoopin since ever

4
-20
Reply
The Voice of Reason
Reply to  SaintJoseph

Do you know the reason we know the toothbrush was invented at the University of Tennessee?

1
0
Reply
SaintJoseph
Reply to  The Voice of Reason

0
0
Reply
The Voice of Reason
Reply to  SaintJoseph

If it had been invented anywhere else, it would have been called the TEETHbrush.

4
-1
Reply
SaintJoseph
Reply to  The Voice of Reason

Haha good one OR perhaps the GUMbrush?

0
0
Reply
Swimmer
Reply to  The Voice of Reason

What does that have to do with this meet?

0
0
Reply
Swimmer
Reply to  The Voice of Reason

Because they wanted to have better teeth than everyone else?

And gums! Gingivitis can add to bad breath! Them TN swimmers are great at holding their breath (bad or not) while kickin real fast underwater sorta like fishes!!! Yeee HAAA GO ManVols and GirlVols!!!

Ooops looks like I forgot ta carry the 1 into the 100 column…darn. Those She-gators and Hegators got lucky at home.The Man Vols and Girl Vols musta caught a flu or something. Oh well…next year!!!