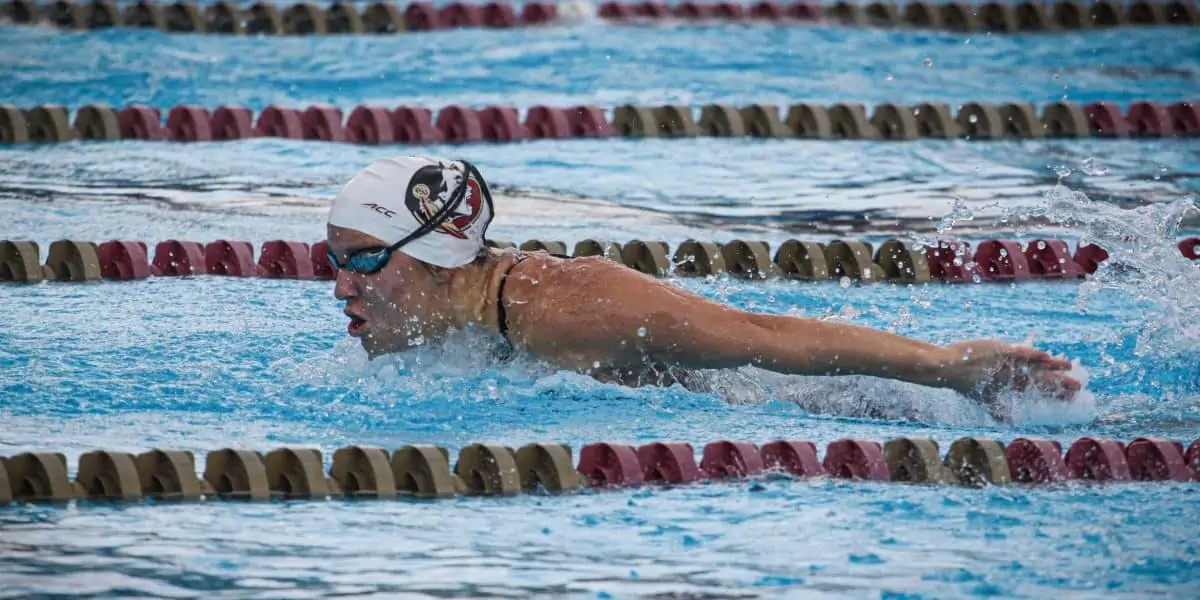 Jenny Halden of Florida State likely secured an NCAA Championship invite, making her the second woman on the team to do so this season. Archive photo via Christa Salerno/Florida State Athletics

Swimming on the first day of a “Last Chance” Invitational on Saturday, at least one swimmer locked up an NCAA Championship invites on Saturday in Athens, Georgia as part of a UGA-hosted NCAA Qualifying Meet.

In the women’s 100 fly, Georgia’s Courtney Harnish swam 51.96 in the 100 fly in prelims before scratching the final. This is the second-straight season where she’s gone to the Georgia Last Chance Meet and swum a new best time in the 100 fly – last year, she went 52.39.

The more significant qualifying result came in finals, where 21-year old Florida State freshman Jenny Halden swam 52.15. That time is fast enough to have qualified for every NCAA Championship meet in history (last season, 52.34 qualified), and with cuts expected to be slightly slower than normal this year, that should get her in for Greensboro.

Halden is originally from Norway.

Her preious best time from the ACC Championships of 52.62 ranked her tied-for-40th in the country. Her swim on Saturday jumps her up to 26th place. With the last of the pre-nationals women’s NCAA D1 conference championship meets wrapping up this week, that makes her a lock for an NCAA invite.

Another Florida State freshman, Pia Murray moved herself into ‘bubble’ territory in the women’s 200 back. Murray swam a 1:55.21 in the event final, which is her best time by 1.6 seconds. That moves her from ranking 75th in the country this season into 44th place nationally.

There are a few swimmers ahead of her who plausibly won’t enter the race at the NCAA Championships – like Paige Madden of Virginia, Kate Moore of NC State, and Alex Walsh of Virginia. Those few spots improve Murray’s chances, though she’ll still probably need some ‘help’ to earn an invite.

The Seminoles ended the day by improving their seaosn-best time in the 200 medley relay from 1:36.97 to 1:36.79. That leaves them .39 seconds short of the “A” cut they need to be eligible for NCAA Championship relays (Halden is only their 2nd likely individual qualifier for the meet).