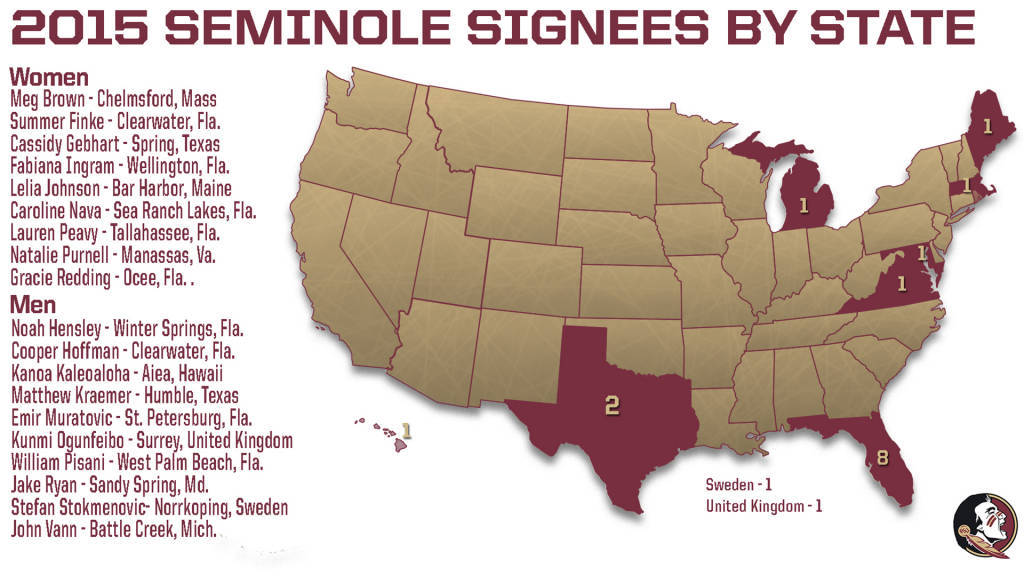 Kate Douglass continued her dominant performance at the 2020 Tennessee Invite by earning the top time from prelims in the 100 free with a 47.77.

Kate Douglass went the fastest 50 fly relay split in history tonight, then became the seventh woman ever to break 50 seconds in the 100 fly.

Douglass also moved into a tie for 5th place in the all-time rankings in the 100 yard fly on day 2 of the 2020 Tennessee Invite.

TALLAHASSEE, Fla. –The Florida State swimming and diving head coach Frank Bradley has put together a 2015 signing class of 19 members which has the potential to elevate the program beginning next season. The women’s team will have nine new athletes while the men will welcome 10 this fall.

“This class has the ability to come in and have an immediate impact,” Bradley said. “Everything about this class raises the bar – speed, depth, training and they’re loaded with overall talent. I feel this group understand the standard of where we want to be on top of how to balance being a student-athlete.”

In addition to their accomplishments in the pool, 11 athletes rank among the tops of their classes academically.

“On the women’s side we’ve filled our holes in the lineup with this class,” Bradley said. “The men’s class completely turns around the team. We graduated so much from last season and this year we just didn’t have the development. This younger group will come in and fight for spots and get better right away.”

Finke is a four-year MVP for Countryside High School. As a member of St. Petersburg Aquatics, she is a 2012 and 2016 Olympic Trials qualifier in the 800 free. She has competed regularly on the national level since 2011, including the 2014 Open Water National Championships.

A platform specialist, Gebhart placed 10th in both the 2014 USA Diving Senior and Junior National Championships. She was also fifth at the 2014 USA Diving Zone C Prelim in 3-meter synchro after taking second on platform and eighth on individual 3-meter.  Gebhart was fourth at the 2015 6A State Meet in Texas on 1-meter with a score of 483.85 after taking sixth a season before.

A member of the Puerto Rican Swimming Federation, Ingram is a two-time 2A FHSAA State Championships silver medalist – taking second in 2014 in the 50 free after earning silver in 2013 in the 100 back. She is a two-time Suncoast MVP where she was named to both the Palm Beach Post and Sun Sentinel first teams all four years. Ingram helped the 200 medley and free relays to state titles as well as an All-American status in 2014.  While at Suncost, she is the co-founder and president of the Women in Science and Engineering, a Scholastic All-American, a National Hispanic Scholar and a member of the National Honors Society.

Entering her 12th year as a swimmer, Johnson was named the Performer of the 2014 Class B State Championship Meet and was awarded the Performer of the Year in 2014 after breaking both state records in the 50 and 100 free races.  After sitting most of her sophomore season with mono, she came back to help Mount Desert Island to a state title by contributing all-state honors in the 50 and 100 free races.  Johnson placed sixth in the 50 fly at the 2014 Long-Course YNCA Nationals at IUPUI and is tabbed as the top recruit in Maine by collegeswimming.com.

Nava is a junior and senior national qualifier while representing Pine Crest Swimming. She is a First-Team All-County Miami Herald and Sun Sentinel selection in 2011-2012 while earning All-American accolades in the 50 free in 2012 where she was the runner-up at the FSHAA State Championships. Nava is a two-time Westminster Academy Athlete of the Year. She has made the Headmaster’s List since sixth grade and is a member of the National Honor Society where she ranks in the top 15 percent in her class.

A local signee, Peavy continues a family tradition following in her grandparents as well as her dad’s footsteps by attending Florida State. She helped Chiles to four-straight state titles while co-captaining the squad that took the crown her senior year.  Peavy was selected to the All-Big Bend Team all four years while being named the Sophomore Swimmer of the Year in 2012. While swimming for the Area of Tallahassee Aquatic Club under former FSU head coach Terry Maul, Peavy is a two-year junior national qualifier. As a student she is a four-year Scholar Athlete-Award winner as well as a Principal’s Honor Roll member.

A three-time NCSA Junior National gold medalist, Purnell is a Virginia High School 6A North A Finalist in 2013 and 2014 in the 100 breast. She is the school record holder in the 100 breast and 200 IM and is a Washington Post All-Metro honorable mention in 2014. As a member of Nation’s Capital Swim Club – the same team as current world record holder Katie Ledecky, Purnell was awarded the Coaches Award in 2012-13 and the Iron Horse Award for her dedication to the sport in 2014.  Purnell competed at the 2014 Winter National Championships in the 100 and 200 breast as well as the 200 and 400 medley relays. She has also earned a USA Swimming Scholastic All-America status and is a member of the National Honors Society.

In her 13th year as a swimmer, Redding was fifth in the 50 free and seventh in the 100 fly at the 2014 FSHAA State Championships. She is a junior and senior national qualifier in the 50, 100 and 200 free events as well as the 100 and 200 fly races. Redding was a member of the 4×100 free relay that placed in the top eight at Winter Junior Nationals in 2014 representing Highlander Aquatics.

An all-around prospect, Hensley is the young brother of current FSU junior Cole Hensley. He is a two-time 4A state champion in the 100 fly. He added another title in the 200 free to his list in 2014. He was the 2013 and 2014 Orlando Sentinel All Central Florida Male Swimmer of the Year. He is a three-year junior national qualifier while representing the Blue Dolphins. Hensley is also an Academic All-American.

Hoffman was a four-year MVP for Countryside High School where he earned All-American honors in the 50 free his junior season. He is on the honor roll and a member of National Honors Society. Hoffman’s grandmother attended Florida State and a cousin was a captain on the cheerleading squad.

A Hawaiian All-State individual and relay champion and All-Star, Kaleoaloha is also a water polo player. He is the defending champion in the 100 free and was runner up in the 50 in 2014. He has also excelled in the flatwater kayak where he was crowned the champion of the USA Canoe and Kayak.

Kraemer is a three-year all-state selection and a 2014 District Most Valuable Swimmer. He is the Texas Region 6 4A regional record holder in the 200 free and as a member of the 200 and 400 free relays. He is a junior national qualifier and a former USA national record holder as a part of the 200 free relay. As a freshman Kraemer also ran cross-country where he was a regional qualifier. He is an outstanding student where he is expected to graduate in the top five percent of his class. He is a member of National Honors Society and a USA Swimming Scholastic All-American.

In just under three-years competing in the sport, Muratovic is a two-time state champion, first winning the 50 free his junior season with a 20.81 before taking the 100 free as a senior for Ridgewood High School. He also ran track and played basketball.  Muratovic was on the honor roll for all four years. He is a national qualifier in the 100 free.

One of the brightest rising stars in the United Kingdom, Ogunfeibo represented his country in the Portuguese Open Championships as a part of the England Youth Talent Team, picking up silver in the 200 medley relay and bronze in the 200 free relay. He was a member of the ASA London Region in the Catolnia Senior Championships in 2014, where he captured a trio of bronze medals in the 50 and 100 back as well as the 400 medley relay. Ogunfeibo is the national record holder for the 16 year old boys’ LC 50 backstroke at 26.27.

Pisani took silver in both the 100 back and 200 free events at the Florida 2A State Championships in 2014 and he holds junior national times in both events.  He helped Suncoast to a silver medal in the 200 free relay and a seventh place finish in the 400 free relay. His 200 free at the meet was the fourth best performance at the meet according to collegeswimming.com.

Ryan was a golfer and a basketball player before he gave up those sports in order to swim his sophomore year. In just two seasons, Ryan went from a 5:26 500 free to a 4:37 and a 2:00 to a 1:42 standard in the 200 on top of being named Sherwood’s MVP and record holder. He also tested the open water aspect of the sport, placing third in the non-wetsuit 4.5 mile Annual Bay Bridge Swim.  Ryan is a Potomac-Valley and AP Scholar. Both of his parents were involved in aquatics – his mother, Alice was a US Synchronized Swimming National Team member and his father David was an Olympic Trial qualifier that swam for Virginia Tech.

Stokmenovic comes to Tallahassee through the pipeline from Indian River State College. He was the 2014 NJCAA National Champion in the 50 free before he set the national record leading off the 100 back in the 400 medley relay. Individually he placed second in the 100 fly and 100 back.  A native of Sweden he is a multi-gold medalist on both the senior and national level.  He was also a soccer player before he enrolled at Indian River where he made the Dean’s List.

The 2014 MHSAA DII Swimmer of the Year, Vann is an All-American in the 100 fly and the 200 free events. He was an NCSA finalist in the 100 and 50 free in 2014 and is a two-time state champion in the 100 fly in 2012 and 2013.  He is a two-year Scholastic All-American at Lakeview High School where he is also on the honor roll, a member of National Honors Society and Student Government. Vann comes from a family of athletes as his sister Ellen is a current member of the Florida Gulf Coast swim team and his sister Kate and brother Bill were former Michigan State triathletes.