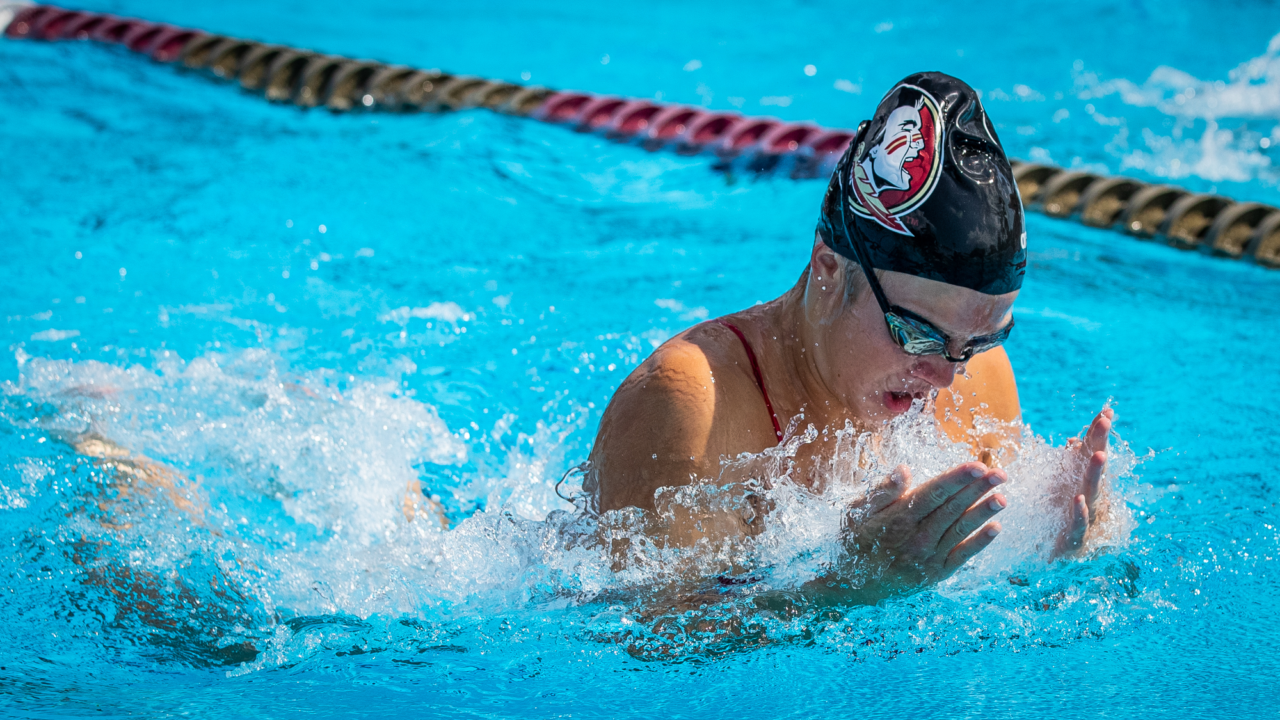 The rookie Peter Varjasi went 44.5, while on the women's side, Nina Kucheran (pictured) split the breaststrokes with Minnesota's Lindsey Kozelsky.

Florida State’s women dominated in the sprints, thanks in large part to junior Emma Terebo. She swept the sprints in 23.19 and 50.57 – considering she was 23.9 last year against Minnesota (and only 51.8 in the 100 free in October), that’s a strong early-season showing. Terebo also split 22.8 and 22.9 on a pair of relays.

The marquee matchups were in the breaststrokes, where Florida State’s Nina Kucheran and Minnesota’s Lindsey Kozelsky were both projected NCAA scorers last year, though Kucheran struggled at NCAAs and didn’t score. Kucheran got the first win, besting Kozelsky 1:00.42 to 1:00.66. But Kozelsky fired back with a 2:13.79-to-2:14.79 win in the 200.

Florida State has generally done very well with international recruiting, and it looks like they brought in a couple intriguing talents this year, too – freestylers Mohamed Ghaffari and Peter Varjasi came up with key wins against the Gophers.

Ghaffari went 1:38.90 in the 200 free, winning a touchout with Minnesota’s Tim Sates (1:38.95). That was one of a bunch of touchouts, and none seemed to go Minnesota’s way. Ghaffari is a Tunisian national teamer who has been 1:49.9 in long course meters. A 1:38.9 this early suggests his speed is translating pretty well to the short course pool.

The breaststroke was wide open because Minnesota ace Max McHugh didn’t compete for a second straight meet. McHugh was a freshman sensation last year and is the top returner nationwide, but suffered a gunshot wound this offseason and hasn’t yet competed since the shooting in July.

The Gophers did win the 200 free relay, which is a notable accomplishment against a Florida State program that has been excellent in the men’s sprints. Matt Thomas led off in 20.58 and Sates anchored in 20.33. Thomas had earlier won the 100 fly in 48.96 – about a tenth faster than he was at this meet last year.

TALLAHASSEE, Fla. –   On a chilly Friday evening at the Morcom Aquatics Center, the (No.17/24) Florida State swimming and diving teams were on fire against RV/18 Minnesota, claiming two strong victories.

Between both teams, the Seminoles won 23 events, including four sweeps of first, second and third place.

“It worked out great for us tonight,” FSU head coach Neal Studd said. “Our team fixed some things from last week that we were working on, which is what we were most happy about. We had a great day and we’re really excited with how we competed across the board.”

The women started off the night with a big win in the 200 medley relay behind the team of freshman Tania Quaglieri, sophomore Nina Kucheran, sophomore Aryanna Fernandes and junior Emma Terebo, with a time of 1:39.78.

The Golden Gophers won the 1000 free, but sophomore Kertu Alnek answered with a season best swim in the 200 free for the victory at 1:49.43.

Minnesota won the next three events before Fernandes won her second event of the night in the 100 fly, posting a time of 53.82.

The team of Moynihan, Terebo, Fernandes and Alnek closed out the meet with a victory in the 200 free relay with a time of 1:32.62.

Florida State was dominant on the boards, finishing in first and second place in all four diving events on the night.

“They did a good job for where they’re at in the season,” FSU head diving coach John Proctor said. “Especially under these conditions. Everybody showed up and we got it done.”

The Seminoles closed out the first part of the meet with a sweep in the 50 free as Ksiazek led the way in first with a time of 20.58, followed by freshmen Ian Cooper at 20.77 in second and rookie Domen Demsar in third at 20.91.

The Seminoles will travel to Atlanta, Ga., to face Georgia Tech on Oct. 26 at 11 a.m.  For more information on FSU swimming and diving, visit Facebook, Twitter and Instagram.

MINNEAPOLIS – The University of Minnesota swimming and diving teams dropped their first road duals of the season Friday evening against the Florida State (FSU) Seminoles. The Gophers took several notable steps forward from their season opener, but were unable to come through against a powerful FSU team.

Sophomore Abbey Kilgallon delivered an early first place finish for the Gophers, winning the 1000 freestyle with a time of 10:04.51. The U performed strongly in the long distance event, as junior Abbey Erwin touched the wall shortly thereafter, posting a third place time of  10:13.03.

In the women’s 100 back, the Maroon and Gold came up big with a one-two finish. All-American Tevyn Waddell touched the wall first, swimming the event in 55.10. Junior Emily Cook came in second with a time of 55.85.

Cook also sped her way to a first place finish for the U later in the evening, winning the 200 back with a time of 2:02.31. The Gophers posted four of the top five times in the event, with Jordan McGinty, Patricia Van Law and Lillianna Brooks following Cooks’ lead.

Following up her quality performance in last week’s meet, senior Lindsey Kozelsky held steady against FSU by swimming an NCAA B-cut time in the 100 breast (1:00.66). It was ultimately a two-three finish for the Gophers, with freshman Grace Bennin touching third with a 1:04.42 time.

Later in the evening, Kozelsky broke through and won the 200 breast, completing the event in 2:13.79.

In the 500 free, Kilgallon claimed her second top finish of the dual, touching the wall in 4:55.57. Kate Sullivan finished second, as her 4:57.25 time made it a one-two finish for the Gophers.

In the diving well, sophomore Jae Sarkis and freshman Jaclynn Fowler paced the Gophers in both events. Sarkis placed third in the one-meter, with Fowler close behind, finishing in fourth. Both divers totaled NCAA Diving Zone qualifying scores in the three-meter: Fowler with a third place score of 283.50 and Sarkis with a fourth place score of 282.30.

It was a solid night for Minnesota on the long distance front, as junior Cameron Kelley won the 1000 free for the men as well, touching in 9:18.12. Aidan Dillon finished third in the event for the U.

On the heels of last week’s breakout meet, junior Tim Sates kept some momentum going by finishing second in the 200 free with a time of 1:38.95. It was one of two top-three finishes on the night for Sates, who finished third in the 100 free as well (45.48)

Junior Eitan Yudashkin also recorded a second place finish, swimming the 100 breast in 56.42. Evan Yoder touched the wall in 57.75, making it a two-three finish for the Maroon and Gold.

In the 200 breast, the aforementioned duo made their presence known yet again. Yudashkin and Yoder improved to score a one-two finish with respective times of 2:03.60 and 2:05.29.

Minnesota’s team of Matthew Thomas, Tuomas Pokkinen, Yudashkin and Sates closed out the night with a win in the 200 free relay. Thomas also won the 100 fly with a time of 48.96.

Junior Maxim Royzen had the top score in both diving events for the Gopher men. In the one-meter, his third place score of 311.47 was also an NCAA Diving Zone qualifying total. Sophomores Aiden Werner and Ryan Phillip finished fourth and fifth, respectively.

In the three-meter, Royzen again placed third with a 313.95 score, while Werner finished fourth.

Notable
Kilgallon was the sole Gopher to haul in multiple first place finishes in the dual (500 free, 1000 free).

Coach Studd really seems to have things moving in the right direction in Tallahassee! Go ‘Noles!