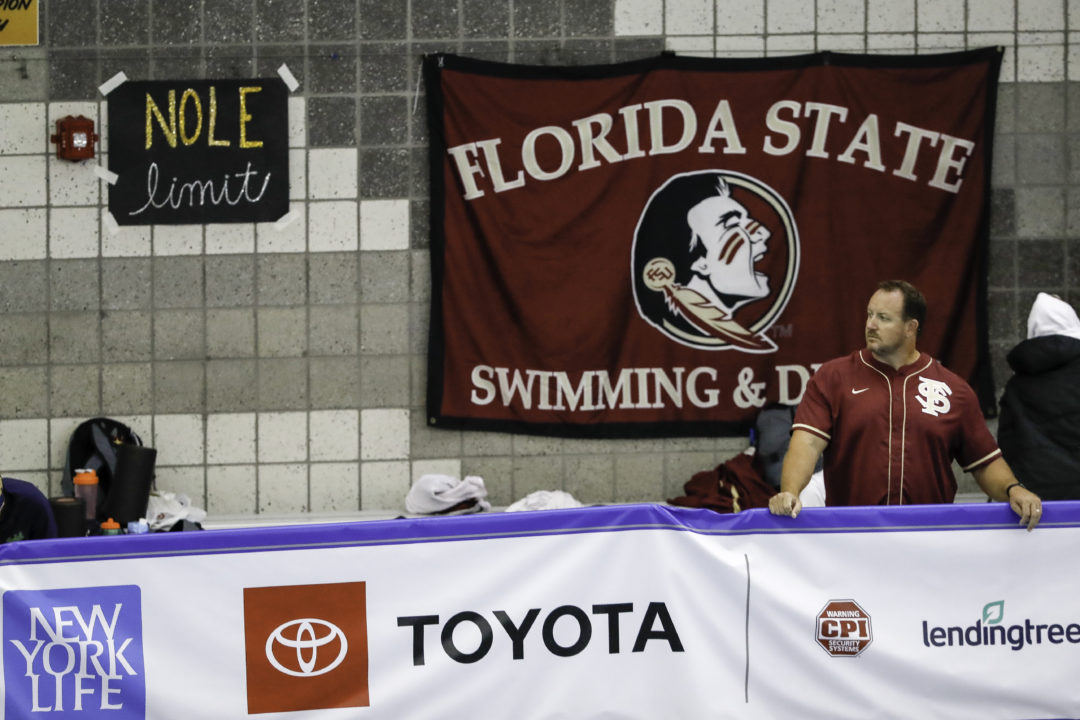 None of the positions that are being cut are expected to be coaching positions. The school also announced a 20% reduction in operating costs. Archive photo via Jeremy Esbrandt/FSU Athletics

Florida State University has announced reductions in 25 full-time positions and pay reductions for most of its athletics staff as part of a 20% reduction in the department’s athletics budget for next year. This comes as universities across the country grapple with the economic fallout of the coronavirus pandemic that threatens the future of college athletics.

The department says that there is a “strong possibility” of furloughs to further reduce costs.

Florida State head coach Neal Studd says that while he doesn’t yet know who all was cut, and that many are open positions that won’t be filled, but that he doesn’t believe any coaching staffs will lose positions.

The school’s highest earners will take the biggest cuts. According to Tomahawk Nation, an SB Nation site dedicated to Florida State Athletics, head football coach Mike Norvell will take a 25% pay cut on his salary next season of $4 million.

The school formally announced on Friday the full schedule of pay cuts, but it appears as though the department’s highest earners, above, will take the biggest hits.

Other Swimming & Diving Staff Salaries (Based on last season’s salaries):

The school has also eliminated positions in its Booster club.

The department’s financial situation was on rocky footing prior to the outbreak of the coronavirus. In fiscal year 2018, in spite of a $23.7 million increase in revenue that ranked it as the highest revenue department in the ACC, the school ran a $3.6 million deficit. The school was able to balance its budget, thanks in part to a $6.15 million transfer from the Booster club, in fiscal year 2019.

Florida has seen one of the most dramatic rises in new coronavirus cases in the country over the last month. On June 10, the state’s 7-day average of new cases was 1,210. Now, a month later, that average has climbed to 9,087 new daily positive tests. Much of that growth has been concentrated in central and southern Florida. Leon County, where Florida State is located, has seen 2,160 coronavirus cases and 8 deaths attributed to COVID-19. That is just the 22nd-most cases among Florida counties.

While both the Pac-12 and Big Ten have announced that their football teams, among other fall sports, will cut their schedules back to conference opponents only in 2020, the ACC has not yet made the same move. The conference, which includes Florida State, has, however, said that its member schools won’t begin competition in fall sports until at least September.

This doesn’t surprise me. I hate seeing anyone get laid off or their salary cut, especially during these times. I was down there on business and went to a football game the day after former coach, Jimbo Fisher, left town in Dec, 2017 for Texas AM and I was shocked at the poor condition and upkeep of the athletic facilities, including the swimming facility. There appears to be some sort of disconnect between the boosters and the school’s athletic department and the place has become a dump compared to other ACC schools that I’ve been to. There was a fan sitting in front of me complaining about why would Jimbo leave FSU. All I could think was why wouldn’t he… Read more »

No. Jimbo left because the football stadium and the practice facility, like other athletic facilities they use, are dumps.

Is it me or is that a surprisingly low salary pool for what is often thought of as a “big time” athletic department?

Believe me, FSU is not big time anymore. It used to be, especially for football, but they let things go.

Now this is all with exceptions – Athletic departments have ways of not disclosing a full salary (don’t have to disclose if part of a salary comes from donors, etc) and no one other than those involved really knows what coaches make off of summer camps (when they happen…)

I am actually very excited to see this article. I worry about schools cutting sports as a quick reaction. I want to applaud the AD for working with highly compensated staff and reducing their pay. I am happy to see an AD willing to reduce 25 positions rather cut athletes. I now that budgets are going to be reduced. I appreciate an AD who is able to do this without cutting sports.

Agreed. The football coach taking a 25% cut is a highly significant move. Let’s all focus on making it through this and living to fight another day, as opposed to making permanent, drastic decisions that close doors.

This AD does not have the typical AD background. He worked outside of athletics at FSU and was an interim appointment who was extended to a permanent hire. He may think of solutions that an AD who comes from within an athletic culture may not (time will tell). Similar to Louisville’s Vince Tyra, who has a similar background, they have come up with solutions so far that haven’t included elimination of programs (crossing fingers).
Coburn also has worked with the Seminole booster club finally bringing them under the athletic umbrella. That created a huge issue in the past and has contributed to the facility issue which led to Fishers departure (along with some recruiting misses).

Au contraire, swimmers at FSU have been cut leading into this season. Some were seniors!

The program hasn’t been cut nor have any sports been eliminated. If swimmers were cut, that’s a coach decision.