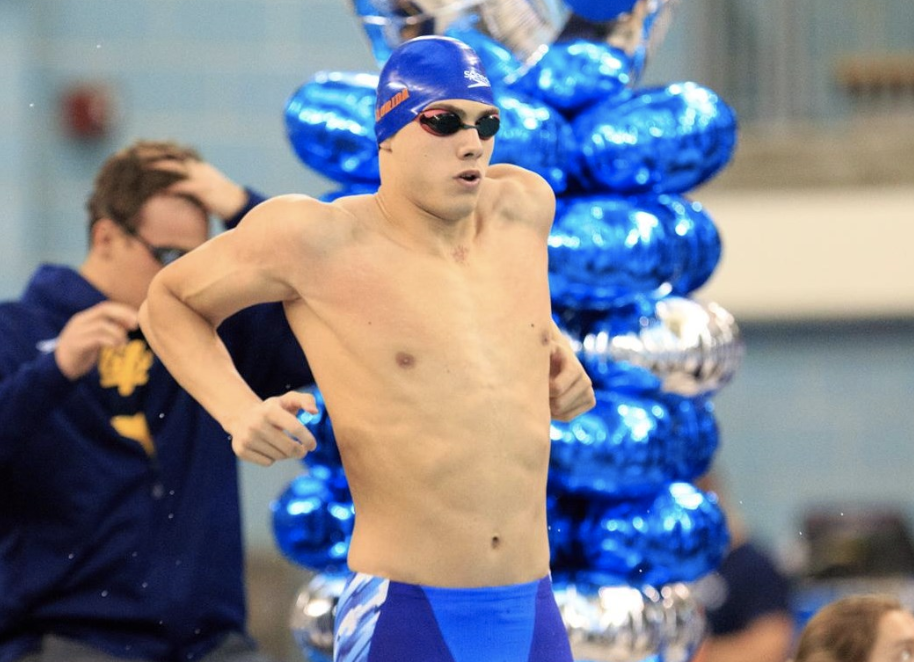 The Gators will compete with the Volunteers in their last dual before the 2020 SEC Championships next month. Archive photo via Justin Casterline/University of Florida Athletics

GAINESVILLE, Fla. – The No. 9 University of Florida men’s swimming and diving team will face off with No. 12 Tennessee in their final regular season dual meet on Saturday, Feb. 1 in Knoxville, Tenn.

Florida (7-1), holding an 18-meet win streak in regular season finales, is coming off a dominant Senior Day performance over Auburn on Jan. 25 in front of a capacity crowd in the Stephen C. O’Connell.

Kieran Smith led the Orange and Blue to their second conference victory of the season with a three-win performance that earned him SEC Men’s Swimmer of the Week. The sophomore would a post new career-best in his 100 free (43.50), and post additional wins in the 100 back (47.96) and the 400 IM, beating the field by over two seconds.

The 400 free was won by a relay of Khader Baqlah, Will Davis, Eric Friese and Smith, who beat the second-place finishers by almost three seconds.

Alex Farrow would go out with a lifetime-best dive in his last competition at the O’Dome, winning the 3-meter with an overall tally of 370.28, 1.35 higher than his previous best.

Currently, Florida holds 16 top-10 swims in the SEC, with six of those finding the top-five.

This year’s regular season finale will mark the 46th matchup between the two programs. Florida leading the all-time series 26-19, including winning the past 11 duals between the two schools.

Looking at the Volunteers

The Volunteers will host their Senior Day against the Gators coming off their first loss of the season at the hands of the Georgia Bulldogs on Jan. 25.

Prior to the loss, the team was on a six-meet win streak, beating North Carolina Wilmington, South Carolina, Virginia, Louisville, Purdue and Georgia Tech to start off the 2019-20 season.

The Volunteers’ sprinting efforts have been led by Alec Connolly, who was named SEC Men’s Swimmer of the Week on Oct. 29. He currently is second in the conference in the 50 and 100 free, posting B-cuts in both events.

Their distance events are carried by Taylor Abbott, who also received conference recognition as the Swimmer of the Week on Nov. 12. He currently sits with the fourth-fastest 1,000 free swim, while possessing the fifth-best 1,650 free swim in the conference.

Head coach Anthony Nesty– “Tennessee will give us one last challenge before we head into the postseason. With it being their Senior Day, we know they will be ready to go. We will just have to rely on our training and be ready to compete right from the beginning.”

Head diving coach Bryan Gillooly– “Tennessee is a great way for us to finish off the dual meet season and make some final adjustments heading into postseason. Their facility is similar in a lot of ways to Auburn, Georgia, and IUPIU, so it is a good opportunity for us to get comfortable in that setting. Obviously, the intensity won’t be the same so I will be looking to create some of that from within. The team competitions are always very close so I think diving will play a big role in the final tally. All of the divers have taken a lot of pride in the overall team success in these head-to-head matchups and we would love to close out the season with another W.”

The Gators will now enter championship season, beginning with the SEC Championships on Feb. 18-22 hosted by Auburn. Last season, the team won its seventh-straight conference title with 1,233 points over the four-day competition.

Next up on the docket after SEC’s will be the NCAA Diving Zones on March 9-11.

The team will then come back together for the 2020 NCAA Championships on March 25-28 in Indianapolis, Ind.