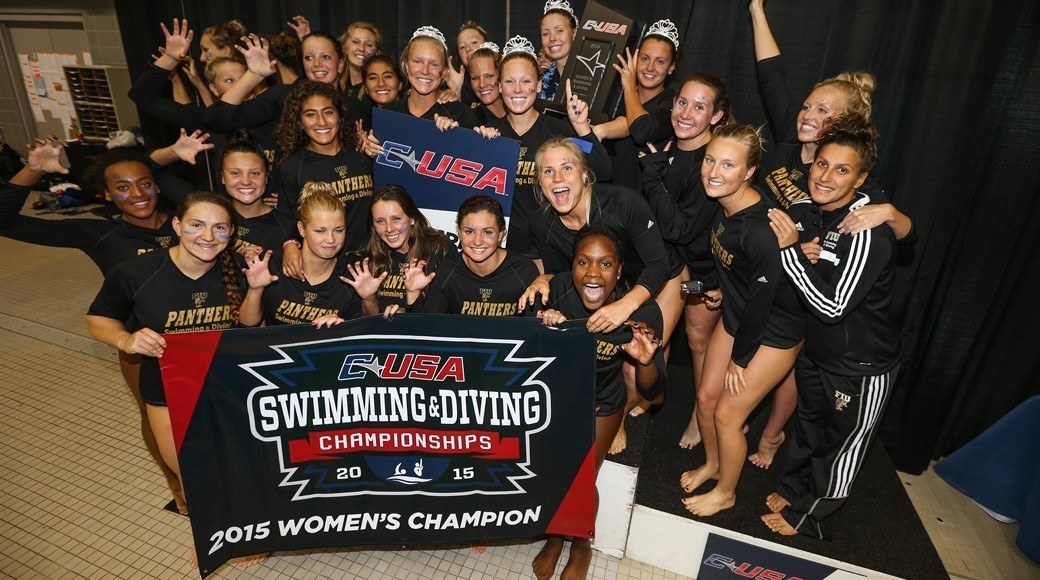 Saturday night features the final night of competition that would end with a Conference USA Champion being crowned. Rice looked to climb back into second place, and they got off to a solid start with senior Erin Flanigan’s victory in the 1650 (16:27.98). Platform diving was up next and FIU’s Lily Kaufmann was able to win and help here school to start to build up their lead in the team scores. WKU only had one diver finish in the top 8, so Rice didn’t lose a lot of ground in the process.

Freshman powerhouse Silvia Scalia (FIU) was then able to race to an impressive 1:53.80 in the 200 back. This broke the FIU school record that had previously been held by Scalia’s current teammate Johanna Gustafsdottir.  Scalia should get an invite to NCAAs with that drop tonight.  FAU junior Agi Bucz then won the next event with a 49.01 in the 100 free. Casey Clark (Rice) ended up in second by stopping the clock in a 49.01.

Veteran swimmers took up the top spots on the podium in the 200 breast.  Claire Conlon from WKU wasn’t able to complete the breaststroke sweep as Johanna Gustafsdottir finished on top in a 2:12.35. Conlon took out the first 100 in an impressive 1:01.81, but Gustafsdottir’s patience worked to her advantage in the end.

WKU senior Susan Marquess pushed the final event of the meet from the start and ended up winning the 200 fly (1:56.91). This time came very close to the school record that was set by Olympian Claire Donahue back in 2009 (1:56.41). The meet was then finished out by a 400 free relay victory by FIU (3:18.85). The team of Silvia Scalia, Paulina Zelazna, Jenny Deist, and Joahanna Gustafsdottier were able to better the FIU school record by almost two seconds.

At the end of the meet FIU was able to come out on top and defeat two time defending champions Rice University by 104 points.  Rice was able to climb out of the hole that they had created from an unfortunately 400 medley relay DQ earlier in the meet. That and diving ended up being the difference maker as FIU was crowed the Conference USA Champion.

In a very tight race, WKU was able to come away with the Conference USA Invitational meet title for the Second year in a row with a slim 15 point margin over ODU. Daniel McGee (WKU) won the first event of the night with a 15:30.40 in the 1650. This ended up being an eleven second victory of ODU’s Bernardo Figueiredo.  WKU then continued their victory streak with a 1:46.15 200 back win by John Myhre.  This was led by a final that included a field that was half composed of WKU swimmers. Platform diving was then won by WKU’s Zach Batus, but ODU had divers finish in 2nd and 3rd.

The 100 free was won by Mattheiu Burtez in a time that bettered the FAU school record (43.48). Burtez dropped over two seconds from his prelim swim, and was able to step up when it counted tonight.  WKU was then able to get back to the top of the podium with a 1:55.26 200 breast victory by Fabian Schwingenschlogl and second place finish by teammate Tj Bland (1:56.24).

Ending out individual events for the Conference USA Invitational Reed Mathews finished over four seconds ahead of the nearest competitor in the 200 fly with a 1:44.65. This time would have been good enough to make NCAAs in 2013, but in 2014 the last invite swimmer was a 1:43.81. Although an impressive swim, the 1:44.65 might not be enough for Mathews to get the invite.

FAU was able to win the final relay in a time of 2:59.47. The team was lead off by 100 free champion Burtz, but it was too little too late as WKU had already clinched the team title. This invitational for the men saw many lead changes and all the WKU swimmers/divers had to find to the end in order to pull out the overall win.

Congrats to Coach Horner and the girls!