EMU Fights Back to be Crowned 2015 MAC Champions 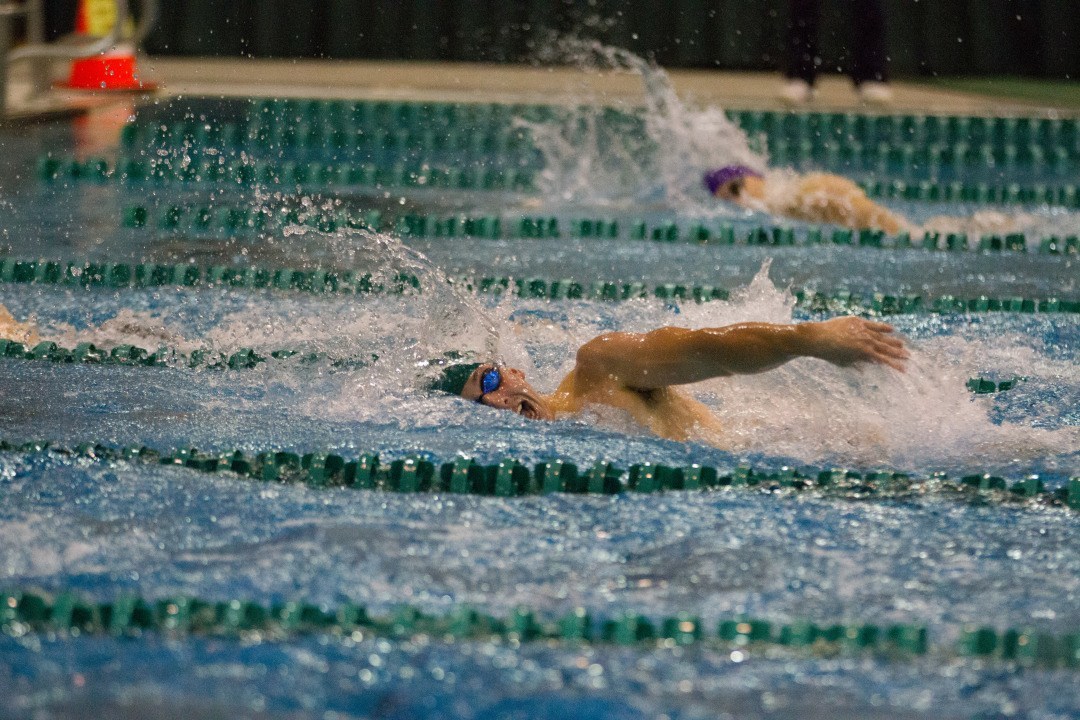 With the help of their deep diving roster, EMU is able to fight back from a 24 point point deficit going into the final day of competition Archive photo via EMU Athletics

Miguel Davila (MOST) was able to start of the final night of competition on a high note for his team by winning the 1650 in a new pool record time of 15:06.54. Runner-up Kyle Linchtenberg (EMU- 15:19.78) was able to stay close at the start, but Davila made his move early to distance himself from the field.

Missouri State backstroke star Paul Le (MOST) claimed the victory in the 200 back, thus completing the backstroke sweep at this year’s MAC Championships. Le finished in a 1:41.69 and was well ahead of the field for the entire race. This time jumps Le up into a three-way tie with Drew Cosgarea (Stanford) and Rob Harder (Yale) for the 25th fastest time in the country so far this year. He is already on the bubble with the 200 IM he swam on Thursday night. EMU’s Cole Bateman finished second in the 200 back tonight with his 1:45.30.

The 100 free saw a familiar face make it to the top of the podium. Thursday night’s 50 free winner, Joe Baumgartner, stopped the clock first with his 43.73. This went well under his 44.24 Miami (Ohio) school record that he set during the 2014 MAC Championships. Brian Moore (EMU-43.74) and Till Pallmann (SIU-43.94) would claim the next two podium positions.

EMU senior Mike Fisher would reset the MAC meet record in the 200 breaststroke. His 1:54.97 pushes him up the 23rd fastest time in the NCAA, so he will likely receive an invite. University at Buffalo’s Scott Huang would touch close behind with a final time of 1:55.64.

The last individual swimming race of the meet would see SIU’s Lucas Aquino take down a meet record that was set back in 1999. This record had been held by Kevin Northup when he swam at Miami (Ohio). Aquino was able to drop a total of 3.36 seconds off the time he was entered at for the meet. Kacper Cwiek (MOST) finished in second (1:48.26) and Matt Wilson (1:48.30) raced to third.

The 3 meter diving event was where EMU was able to make up a lot of ground and regain the lead. Alexander Chan scored 409.95 to win the event and lead a 1-3-7-8 finish for the Eagles. Missouri State’s only diver in the final, Garret Nevels, would finish in 4th.

Missouri State would claim the 400 free relay to close out competition at the 2015 MAC Championships. The team of Paul Le (44.59), Isaac McKnight (44.29),  Vitalii Baryshok (44.18), and Uvis Kalnins (43.54) would battle SIU from the very beginning in this event. The Bears would end up with the victory in the end with their final time of 2:56.50. The relay win wasn’t enough, though, and EMU would finish 20 points ahead of Missouri State to claim their first MAC team title since 2013. Southern Illinois would beat University at Buffalo by two points to finish in third.

Eastern won in 2013 which is more recent than 2011, the men’s team hasn’t lost 2 MAC championships in a row in something like 30 years