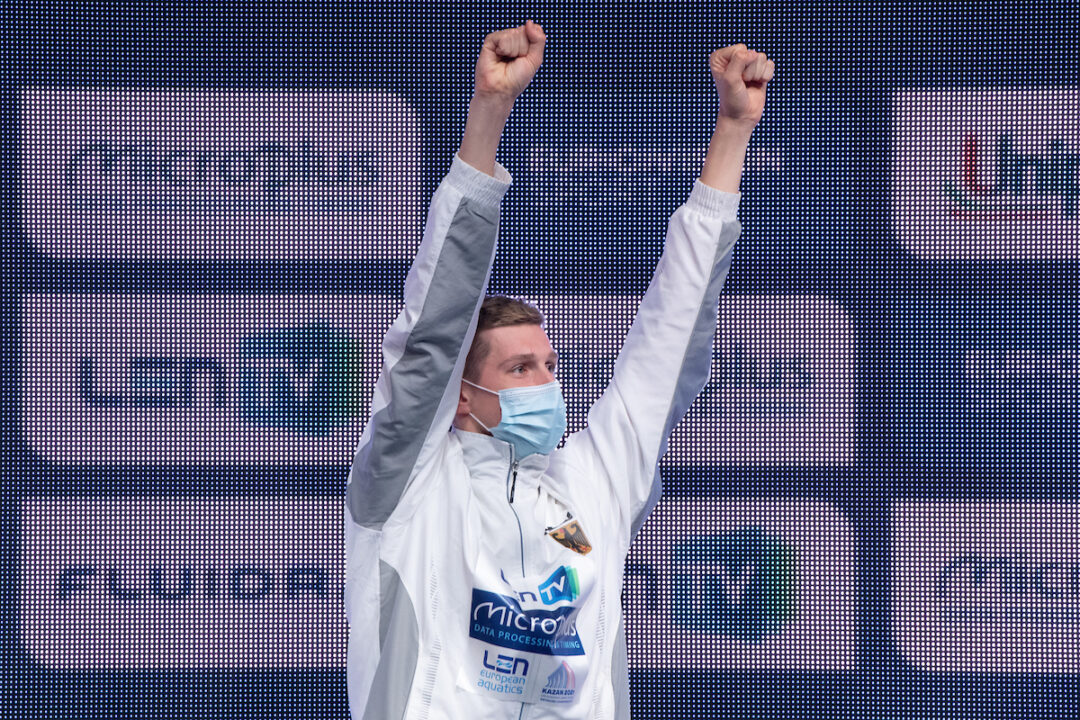 Wellbrock broke Gregorio Paltrinieri's 2015 world record of 14:08.06 by over a second in 14:06.88, winning gold by more than four seconds. Archive photo via Giorgio Scala / Deepbluemedia / Insidefoto

Just days after winning the open water 10km event in Abu Dhabi, Germany’s Florian Wellbrock put on an incredible display in the pool on the final night of the SC World Championships, breaking the world record in the men’s 1500 freestyle.

Wellbrock broke away from Ahmed Hafnaoui and Mykhailo Romanchuk around the halfway mark of the race and soared to gold in a time of 14:06.88, lowering Gregorio Paltrinieri‘s world record by more than a second.

Paltrinieri, who finished fourth in the event, set the previous world mark of 14:08.06 at the 2015 European SC Championships in Netanya.

Just last month, Wellbrock won gold at the 2021 European SC Championships in Kazan, establishing what is now the former German Record of 14:09.88.

The 24-year-old ended up negative-splitting the race here in Abu Dhabi, thanks to his big back-half effort after pulling away from the field. Wellbrock was out in 7:04.33 at the 750, and then closed in 7:02.33.

Comparing the two world record paces, Paltrinieri was out slightly faster than Wellbrock at the halfway mark, exactly 1.5 seconds, but Wellbrock erased that gap from the 800-1000 mark. From there, the German slowly but surely inched ahead of WR pace to ultimately crack the all-time standard by nearly 1.2 seconds.

Hafnaoui out-kicked Romanchuk on the last 50 to win silver in 14:10.94, obliterating the African and Tunisian Record of 14:18.79 previously held by Ous Mellouli, and Romanchuk, the defending champion coming in, finished third in 14:11.47. The two swims rank seventh and eighth on the all-time performances list.

We’ve now seen five swims sub-14:10 in history, four of them coming in the last three years. Grant Hackett‘s world record of 14:10.10 had stood for 14 years before Paltrinieri busted through in 2015.

Just as the pool competition was getting underway in Abu Dhabi, FINA held a two-day open water event which served as its World Series Grand Finale. Wellbrock won the men’s 10km race, and also anchored the Germans to third in the mixed 4x1500m relay.

Absolute legend.
I remember the emotion when he broke the LC 1500 WR . That record should have stood for longer.

no men’s 800m at these WC’s which is odd, might be due to a reduced order of events due to COVID.

Edit: odd because these new Olympic events have to be contested at WC’s prior to acceptance to the olympics but maybe that only applies to LC international meets.

I think it is because this meet is 6 days (LC is 8 days) there are no Semifinals for the 200’s and no 800 for men or 1500 for women and as far as I know it has been like this before. The new thing was all the additional relays.

Fukuoka is going to be interesting. Both Wellbrock and Romanchuk didn’t perform to expectations in the 1500 in Tokyo. Paltrinieri was recovering from mono at the time as well. Finke surprised all of the above, and should only get better. Hafnaoui had a tremendous breakout swim today. He could very well be another link in the chain battling for a medal in Fukuoka.

Would’ve definitely been a close race. We also must remember Finke was by himself all 3-4 times he’s been 14:12. I haven’t seen him “Finke” a distance race prior to the Olympics outside of the 400 IM

7
-5
Reply
Ledecky will go 3:55 in Paris
Reply to  Sun Yang's technique is next level

3
-2
Reply
There's no doubt that he's tightening up

Lmao at that top 10 performance list, all these swims from the past few years then there’s Hackett from before Hafnaoui was even a sperm

so glad this event wasn’t cancelled.