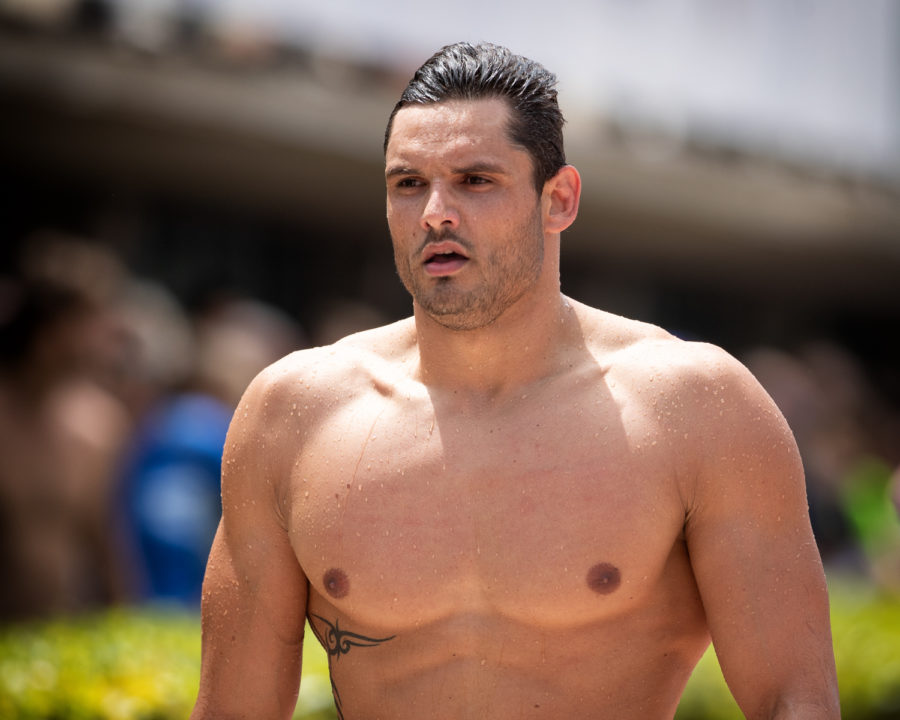 Florent Manaudou showed off a little more endurance than he's had in the past with a fast relay split in the 200 free last weekend at a French Intersquads meet. Archive photo via “Rafael/Domeyko Photography”

Manaudou, who turned 29 on Tuesday, is known primarily for his sprinting abilities. He’s the current World Record holder in the 50 free and 50 back in short course meters, and also holds French Records in the 50 fly, 50 breast, and 100 IM. In short: if it’s in water and requires a lot of fast-twitch muscles, Manaudou is very good at it.

Where he doesn’t have the same strong history, however, is in races longer than 50 meters. He has been 47.98 in the 100 free, but also has some infamous collapses on his resume from early in his career: including at the 2011 World Championships where a 54.02 in the 100 fly on the medley relay, that he split 23.68/30.34, left a French team with a shot at gold out of the final altogether.

Manaudou has built an impressive career out of sprinting, and now, after his return to full-time swimming after a foray into professional handball (which he credits the ISL for motivating), endurance becomes even more important. Showing up at the Olympics and racing just the 50 free and 400 free relay across 8 days is less of a viable option in the ISL’s compact and high-intensity team-based format.

And Manaudou has shown that the Manaudou of old might have turned a new leaf in terms of finishing races. He split 1:46.07 on a relay, which was the fastest split of the field by more than a second – and that’s a field that included swimmers like Jeremy Stravius and Jeremy Desplanches.

This becomes even more crucial with the level of emphasis that the ISL places upon the ‘skins’ events at the end of the meet. This race, which features 3 rounds of 50 freestyles separated by only 3 minutes, ends every meet, and is worth significantly more than any of the meet’s other races. That includes in both dollars (triple a normal event), team points (27 points for the winner, versus 9 for a normal event), and MVP scoring (worth 50% more than a normal event).

In his first ISL meet in Indianapolis, Manaudou beat his teammate Ben Proud in the final 50, but swam only 22.97 in that final round (albeit without much pressure from a team perspective).

A week later in Naples, he made the final and raced against American Caeleb Dressel, and this time finished in 2nd place. Dressel swam 21.33 in the final, and Manaudou was only 23.13.

While his Energy Standard Club is essentially locked-in to a place in the final in December in Las Vegas, their win their is not guaranteed – especially after a very good performance by London Roar in Group B. Energy Standard probably need to find a way to get at least 1 swimmer into the men’s final of the Skin event and lock out the Roar (it’s hard to see Dressel not making the final). With such a short turnaround between 50s, if Manaudou is adapting his training for that dense race lineup, this 200 free could be some sign that it’s taking hold.

Manaudou and the Energy Standard Club are scheduled to race again on November 23rd and 24th in London at the European Derby meet.

Manadou may be improving in his endurance which is great in a lot of ways, but I still believe his true strength and talent lies in his sprinting. You can tell he looks a little uncomfortable in the water when he swims anything longer than a 100, but when he swims 50s the raw speed that he shows is just beautiful to watch

I uhhh, don’t recall either that 54.02 or Tom Shields swimming at Pan Ams

Good article, except it reads like “The ISL motivated his foray into handball” rather than his return to swimming.

He’s a beast! Love it

Is he training with Energy Standard or in France

If Manaudou can build more endurance maybe he can even challenge Dressel in the 100 free in Tokyo. Dressel, Chalmers and Manaudou would be an amazing race

questionable, and even if he can, Chalmers is looking like he can do something unreal

He beat a hurt dressel

You mean that time he beat Dressel in Rio?

Or for the third time you mean Leisurely 1:29 ? Short memory

What’s the third other than Pan Pacs and Rio?

Next year would be the third I meant , if Chalmers can do it .

No way. Big fan of Flo, but straight arm freestyle, which is so effective for 21 seconds, is death over 100 LCM. He had some relay 47’s in his earlier prime, but no way he can go sub-47.

Yes because Abbey weitzeil and Ryan held have terrible 100 freestyles

The discussion was about medalists at Tokyo. And that ain’t going to be Weitzeil or Held. And yes, Abbey’s free comparatively deteriorates compared to her elite peers after 21 seconds. Just ask Simone and the other 5 of 6 women (or more) in the world who can beat her in an LCM 100.. As for Held, that’s not straight arm freestyle anymore than Dressel’s is for his best time this summer. Check it out https://www.youtube.com/watch?v=Glihy8rh84I

Held definitely has medal potential with that 47.4

They both have/had the same coach in Coley Stickels. I would say it worked ok for them.

And Weitzell doesn’t do straight-arm free for the 100 LCM either. https://www.youtube.com/watch?v=AhC1U6pZfDw. Sure, you can splash around in a 100 SCY when your underwaters take you to 12-15, but it’s unsustainable in 100 LCM.