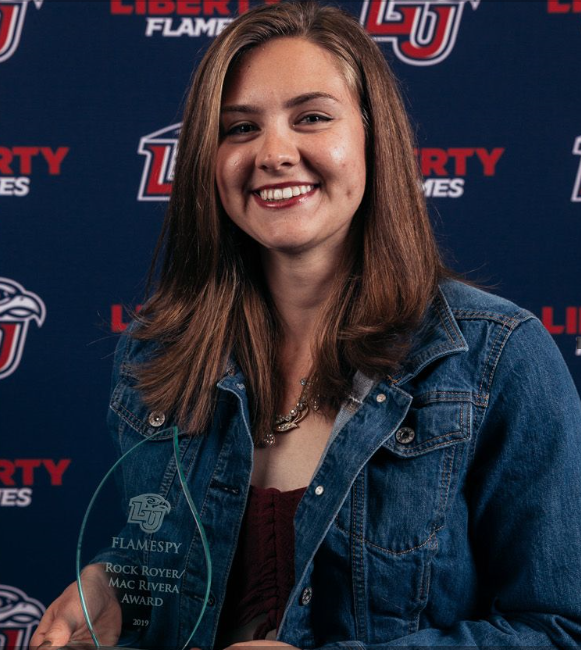 Alicia Finnigan, a senior on the Liberty women’s swimming & diving team, has been named the recipient of the 2019 Rock Royer/Mac Rivera Award. Current photo via Liberty Athletics

LYNCHBURG, Va. – Alicia Finnigan, a senior on the Liberty women’s swimming & diving team, has been named the recipient of the 2019 Rock Royer/Mac Rivera Award. The award was announced as part of the FLAMESPY Award show on Monday evening.

In 1974, the Rock Royer/Mac Rivera Award was established to honor the top graduating senior student-athlete at Liberty University who best exemplifies the standards and lives of both of these great Christian men.

Rock Royer was Liberty’s first football coach in 1973. Mac Rivera was a member of Liberty’s men’s basketball team from 1972 until 1975. Both Rock Royer and Mac Rivera tragically died at a young age, with Royer dying in a plane crash and Rivera passing away after a fall.

This award encompasses more than just athletic ability. It recognizes the Liberty University graduating senior student-athlete who has maintained an exemplary testimony on the playing field, in the classroom and among the student body.

“A model student-athlete in every sense of the term, Alicia is deserving of this prestigious award and exemplifies everything we here at Liberty admire in not just our student-athletes, also our students as well. In my humble opinion, there is no finer ambassador of our athletic department and university as a whole than Alicia Finnigan.” stated Liberty Women’s Swimming & Diving Head Coach Jake Shellenberger.

Shellenberger added, “Athletic success. Academic success. A great leader and lover of God and her teammates. One who overcame adversity to excel at the elite levels of Division I athletics. Living out her faith and taking up her cross daily. All of these attributes define Alicia Finnigan, and we are extremely proud to call her an Alumna of our swimming & diving program.”

As a senior, Finnigan helped the Lady Flames earn their second conference title in program history and first since 2014. She won the 200 butterfly at the CCSA Championships as a sophomore, junior and senior and posted a program-record 10 career podium finishes. The senior holds the program record for the 200 fly (1:55.58), and was named the 2018 CCSA Women’s Swimmer of the Year.

Finnigan competed well on the national stage, scoring three times at USA Swimming National meets. She placed fifth in the 200-meter butterfly at the 2018 USA Swimming Winter Nationals. In 2016, Finnigan competed in the U.S. Olympic Team Trials, and she has already qualified for the 2020 Olympic Trials. She also participated at the NCAA Division I Women’s Swimming & Diving Championships as both a sophomore and junior.

Finnigan was named the 2018 NCAA ELITE 90 Award Winner for having the top GPA of any student-athlete competing at the 2018 NCAA Division I Women’s Swimming & Diving Championships. She helped Liberty post the best team GPA (3.79) of any collegiate swimming & diving program during the fall of 2018.

A native of Sugar Land, Texas who holds a 4.0 GPA, Finnigan will graduate in May with a bachelor’s degree in interdisciplinary studies and a minor in Chinese. She is the first Liberty swimmer to be named a CSCAA Scholar All-American four times, and she was voted to the 2018 CoSIDA Academic All-America second team. Finnigan plans to begin graduate school in 2019. Fluent in Mandarin Chinese, she would like to coach swimming in China.

“When I began my college search, I wielded two criteria to help me make my decision: I wanted a place that was comfortable enough to become my second home, but also one that was uncomfortable enough to grow me. Any place that couldn’t do both of those things wasn’t worth four years of my life. After becoming convinced that Liberty could provide both of those things, I can now happily report that choosing Liberty on that basis has turned out to be perhaps one of the best decisions of my life, and it’s all because of the people who make up the heart of this school,” Finnigan said.

“At Liberty I have found family in teammates, classmates, coaches, and even professors who were all willing to invest in my life, not just what’s on the surface. The strength I pulled from them carried me in times of disappointment, setback, heartache, and yes, as is frequently found in college athletes, utter exhaustion.”

“The people surrounding me gave me the gift of home away from home and filled my life with love like I’ve never experienced before. But they didn’t stop there. The people who defined my time at Liberty absolutely pushed me to my limits and beyond in the best way possible. In the pool, in the classroom, in my relationships, in my pursuit of God—in every area, I had to grow, and in every area, I had people walking alongside me to help me do just that. Because of this, my time at Liberty has simultaneously become a cornerstone and a launchpad, and I know the experiences I’ve had and the people I’ve met will help guide me for the rest of my life.”

Finnigan is the first-ever Liberty swimmer to win the Rock Royer/Mac Rivera Award.

Finnigan is the 52nd overall recipient of this distinguished award, and this is the 46th year Liberty Athletics has presented its top athletics honor to a well-deserving graduating senior student-athlete.