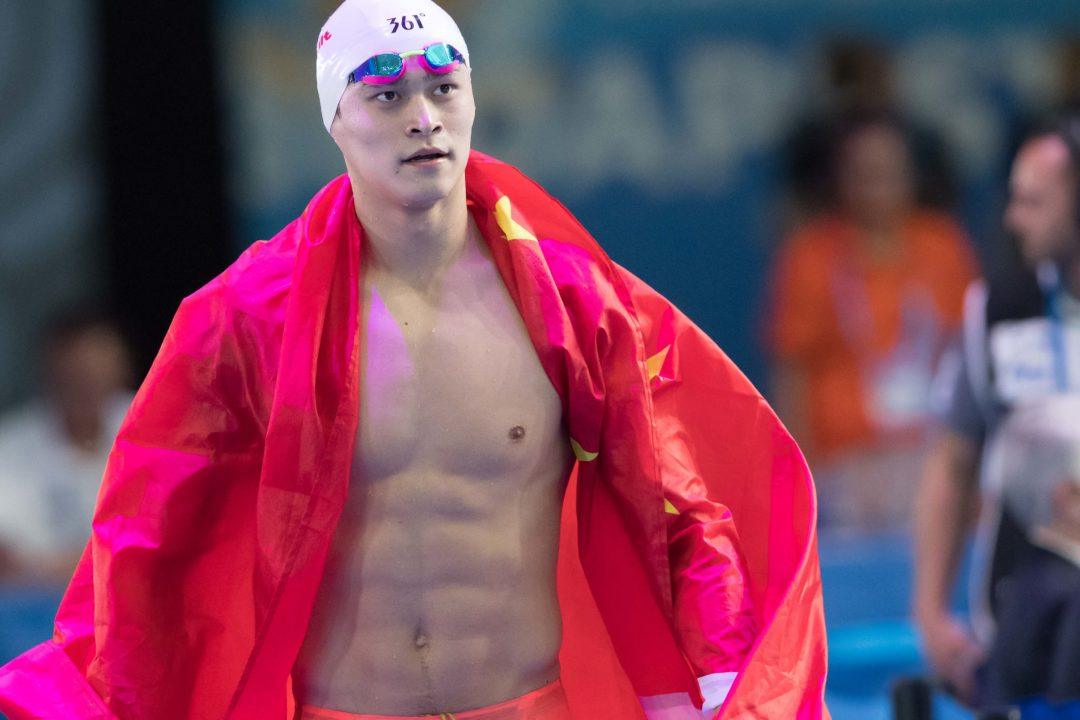 FINA issued a statement regarding the reaction to The Sunday Times' report that a vial of Sun Yang's blood was smashed during an out-of-competition drug test last September. Archive photo via Mike Lewis/Ola Vista Photography

FINA is aware of the reports in the Sunday Times and other media outlets regarding Chinese swimmer Sun Yang. In accordance with FINA‘s Anti-Doping Policy (FINA DC Rules 14.1.5 and 14.3.3) and the decision of the Doping Panel, FINA is not authorised to comment the case. Moreover, FINA will not consider further speculation and hearsay on this matter.

FINA has zero tolerance for the use of banned performance-enhancing substances and methods. FINA remains completely committed to protecting our clean athletes, with a very robust anti-doping programme, and this has proven highly effective in ensuring clean competition at the World Championships and Olympic Games. FINA continued to implement this intensive approach in Hangzhou, China, during the 14th FINA World Swimming Championships (25m) 2018 and will do so again in the future, to preserve the integrity of our sport.

The Sunday Times story alleges that Sun’s mother, after he broke a number of testing protocols, ordered security guards to destroy a vial of his blood taken in a nearby clubhouse, according to witnesses. Dr. Ba Zhen, who supports Sun (and who like Sun has a history with doping), reportedly contacted Dr. Han Zhaoqi, the head of the Zhejiang Anti-Doping Center. Han told FINA that the nurse present didn’t have the necessary paperwork, and at a January 3rd hearing, the FINA panel ruled in Sun’s favor, stating that they would “never know” what had happened.

The World Anti-Doping Association, however, has been claimed to be ‘furious’ over the ruling, and are considering an appeal to the Court of Arbitration for Sport. According to WADA rules, WADA has 21 days following “the last day on which any other party in the case could have appealed” or 21 days “after WADA’s receipt of the complete file relating to the decision.” With athletes or national anti-doping organizations themselves having a 21-day appeal period, that would give WADA until February 14th to appeal the decision of the FINA panel.

Sun’s lawyer Zhang Qihuai issued a statement to Xinhua Sunday threatening to sue The Sunday Times over defamation: “We reserve the right to file a lawsuit against the relevant international media which reports the incident,” the statement read.  It also accused The Times of reporting the news with a “malign intention” and “dubious motives,” and “infringing upon Sun’s privacy and reputation.”

The Chinese Swimming Assocation additionally issued a statement backing Sun’s camp on the claims of defamation.

Alright to make this fair, anyone racing sun yang gets to wear the 2009 arena x glide

FINA needs to start proving intent with every case. There are compounds they claim are “performance enhancing” that most of yall didnt know exist, much less could correctly spell. Also, pretty racist that you’re going this hard on Sun Yang. Or is just all non-American swimmers you cut down fast when they fall on the wrong side…

Umm… I’m pretty sure its the actions of him, along with his mother combined with his previous failed tests that are the basis for “going this hard” on Sun Yang…. just saying.

The man already served his punishment for his 2014 offense. His mother is a grown person and her actions are her own. If your problem is with his past, then ok hold grudges. But unless you can prove intent to cheat, then I’d suggest actually following the mantra of ‘innocent until proven guilty’, otherwise you’re just proving my point that this whole thread is obviously racist

Wow, NO! I promise you if this was Efimova’s mom doing this, or Jessica Hardy’s mom doing this there would be the same amount of “outrage” as you say. But Sun has a history of this, and of a rage behavior (like punching female athletes in the pool).

You are basically saying that by having to prove intent, that a coach/parent can dope up the athlete, but as long as the athlete didnt know then their intent was to never cheat so they are okay and should still be allowed to compete. If you smash a vial of blood that was taken to drug test, it’s pretty clear what your intent was. Otherwise, only those who dope and keep… Read more »

I’m not gonna let some random person take my blood unless unless their credentials are in order. And from the sounds of this scenario, that might be the case. My point still remains: you all are quick to judge and assume guilt, but then remain silent when its determined to be the opposite. Dont hit your head falling off that high horse…

So you don’t think there should be outrage from this? Seeing as how nothing will happen to him as a result of this?? Is this run of the mill normal behavior to you?? or the actions of an innocent person??

And here we go again!

“We will continue to hide our heads in the sand.”