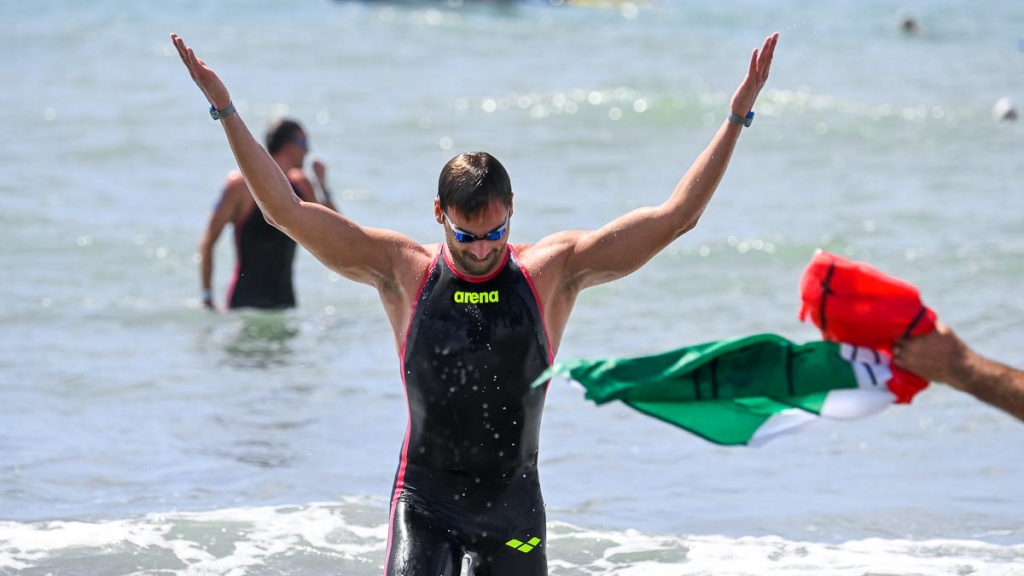 The top finishers in both the men’s and women’s 10km races were separated by less than a second on the third leg of the FINA Marathon Swim World Series.

The third leg of the FINA Marathon Swim World Series came down to a thrilling finish last week as the top finishers in both the men’s and women’s 10km races were separated by less than a second.

On the men’s side, the winner was decided by a late sprint between Italy’s Domenico Acerenza, Australia’s Nicholas Sloman, and Hungary’s David Betlehem after nearly two hours of open water racing in 64-degree conditions. Acerenza, the silver medalist at the World Championships, reached the finish line .85 seconds ahead of Sloman and just over a second in front of Betlehem.

The final sprint with 🇮🇹 Acerenza, 🇦🇺Sloman and 🇭🇺Betlehem in the 10km #opewater in Lac Mégantic 👇

The win moved Acerenza up to fourth overall in the World Series standings, one spot ahead of Sloman and one place behind Betlehem. Fourth-place finisher Kristof Rasovszky of Hungary took over the top overall spot in the standings from Italy’s Gregorio Paltrinieri, who did not compete in Canada after winning the first two stops of the tour in Setubal and Paris.

The Italians placed two more swimmers in the top six courtesy of Andrea Manzi and Matteo Furlan in fifth and sixth place, respectively.

The women’s race slowly turned into a sprint showdown between world champion Sharon Van Rouwendaal of the Netherlands and Ginevra Taddeucci of Italy. In another photo finish that was even closer than the men’s race, Van Rouwendaal edged Taddeucci by just .34 seconds. Olympic champ Ana Marcela Cunha of Brazil was close behind in third place.

The victory puts Van Rouwendaal tied with Cunha atop the overall standings with one more World Series race remaining. Cunha won the first two stops of the tour in Setubal and Paris.

The fourth leg of the tour was supposed to take place in Puerto Rico from Oct. 7-9, but FINA recently canceled the race due to ongoing challenges faced by the Puerto Rican Swimming Federation and limited time to prepare.

The final stop on this year’s tour is scheduled from Nov. 11-12 in Eilat, Israel.

Cancelling this late is slack. Some competitors have huge travel and accommodation costs that will be hard to cancel without incurring personal costs. Not as though this is your local Sunday Swim at the beach……plenty come 1/2 Way around the world to compete.