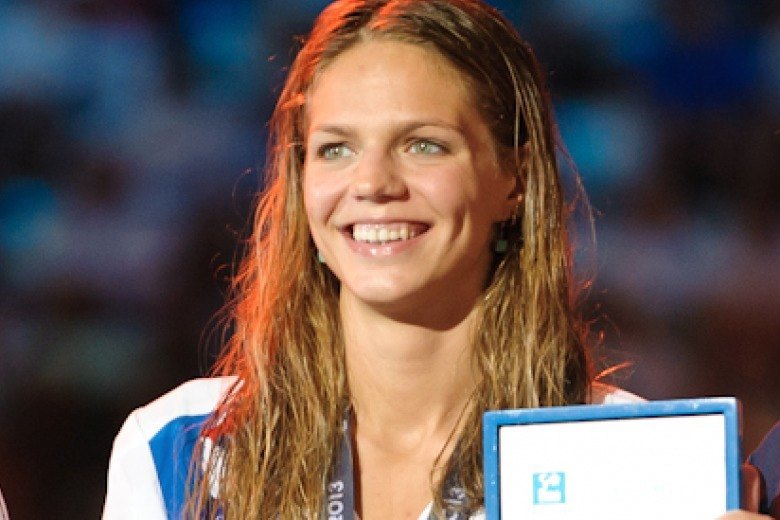 In the first official recognition and acknowledgement that Russian superstar swimmer and World Record holder Yulia Efimova actually tested positive for a banned substance, FINA has leveled a “Provisional Suspension” upon the swimmer as of January 21st, 2014.

The reports of a positive test first came out a week ago in a Russian newspaper, though since then Russian authorities have been carefully cautioning the public against putting too much stock in the report.

But now, with FINA confirmation of a positive test for the Anabolic Steroid DHEA, the details have been confirmed. Efimova was hit with a out-0f-competition doping control test, by FINA, in Los Angeles, where she trains with the Trojan Swim Club.

In the meanwhile, she has been provisionally suspended yet without a hearing before FINA, and that suspension for now will last at least until that hearing is set. This means that Efimova will be out of competition at least temporarily, though history says this period would count as ‘time served’ if a longer suspension is placed upon her.

Since that positive test, we now know that Efimova earned four European Short Course Championship gold medals and a silver as part of a hugely successful winter for the Russians. That includes two medley relay golds. She also broke World Records in the 50 breast and the 200 breast in short course meters after the test: records that as of now still stand.

Efimova would be the first World Championship medalist to be suspended, albeit provisionally, since Denmark’s Mads Glaesner in 2013, though Efimova is an even more significant world player. She’s also the 4th member of the Russian Olympic swim team to fail a doping control test.

The full statement by FINA is below.

sigh, it was inevitable

And the next step would be stripping her medals and annulling her world records? Eh, that’s probably too optimistic.

I hope she will have at least a 2-year suspension.
And will lose her medals and world records from the short course season.
Zero tolerance!

Interestingly, the other swimmer mentioned in the article also trained at Trojans…

I agree.
I hope she gets the full two years suspension.
It is heartbreaking that a swimmers could just cheat their way to records and gold medals, and then still be able to compete in the next Olympics.

I agree !
And hope she pays back all the money she won he the Asia legs of the world cups , so it can be given to the rightful winners , $22500 I believe !!