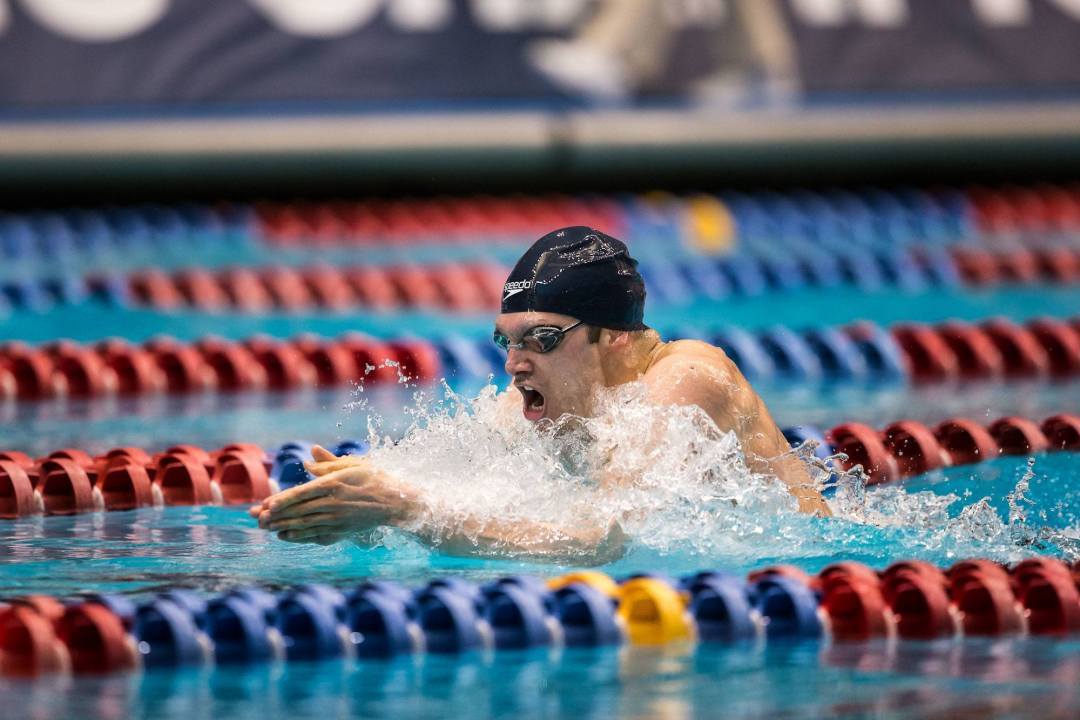 Breaststrokers now have another rules change to learn and relearn in the breaststrokes. (Above, U.S. National Teamer Cody Miller). Archive photo via Tim Binning/TheSwimPictures.com

FINA has announced a rules change to the breaststroke underwater pullout – the latest change to try and give officials a fighting chance, and athletes an even chance, at adhering to the ever-more-complex breaststroke rules.

In the vote, FINA approved a new interpretation of allowing the single dolphin kick on the pullout to come at any time before the first breaststroke kick. Previously, the rules required some separation of the hands before the first dolphin kick. The change will be effective immediately.

Initially, when the dolphin kick was added, most athletes did the dolphin kick clearly during the pull-down. That water became muddied, however, when many swimmers began doing the pullout while effectively still in a streamline – especially in Europe and South Africa, where swimmers were breaking World Records.

That pushed FINA to mandate separation of the hands, which created a very fine inspection of technique where swimmers would create a slight separation of hands, but remain effectively in a streamline.

Now, the rule allows the dolphin kick off of each wall to happen at any point prior to the breaststroke kick.

While that tweak in technique was slow to catch on in the United States, American high school rules already allowed this change beginning with the 2013-2014 season.

The rules still don’t require an underwater pullout at all, which has led some coaches to speculate on ways to take advantage. Specifically, for swimmers who are not primarily breaststrokers, some coaches we’ve spoken to have suggested that in a long event like the 400 IM, they might have their swimmers skip the pullout altogether and instead just do a single dolphin kick before coming up begin their above-water stroke.

I would like to know. If someone is doing fly and his kick often are breastroke. Is that allowed. Been told to shut up cause that is not mentioned in the rule for fly…can anyone help

should i start practicing this now for my big mid season on the 11 of dec.???

With me it sounds much confusing to elite swimmers. But if you can give me the video then we can explain it better to swimmers.
please get me into the idea then i will be able to explain to athletes.

I like the idea of cameras but I think if you are caught cheating there should be consequences, more than just DQ’d – to do multiple kicks off the start on entry or doing a fly kick at the beginning and end of the pull down requires training /practice – if you are practicing to cheat there should be harsher consequences when caught – it’s the same as doping – the athlete is intentionally doing it, ban them and their coaches for a period! Harsh but it will clean up the sport.

I like it. I’d say increasing fines would do for a first and second offense, with suspensions following after 3.

Cut the fly kick out already, never should have been allowed to begin with. Darn you Kitajima!

Hello, can anyone help me with a video explanation on the new Breast Stroke pull out rule.